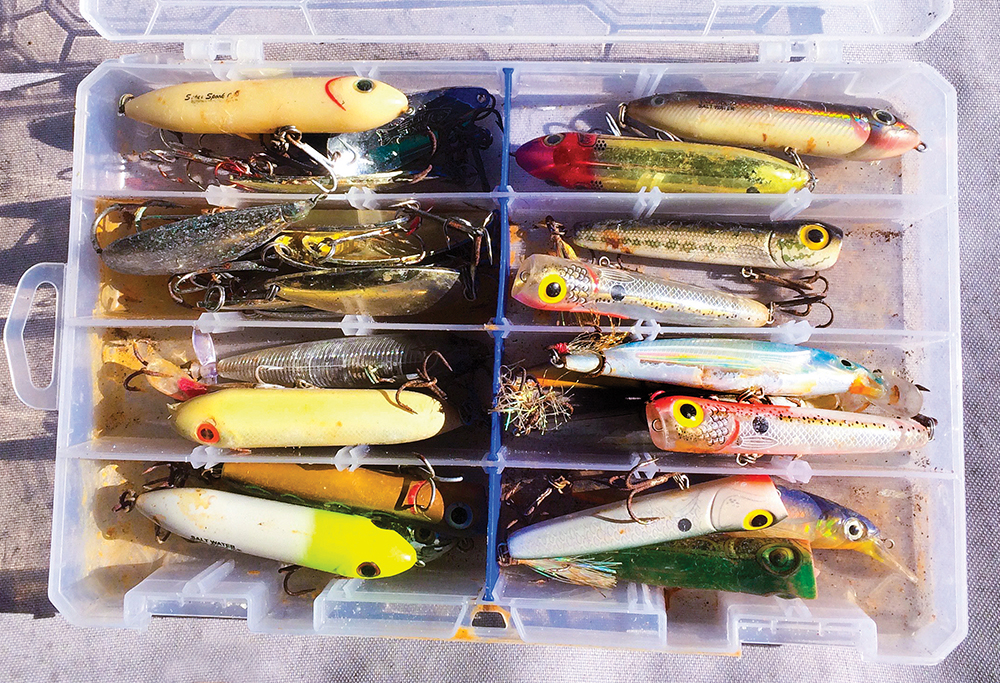 For almost a year, friends used to joke, “What’s in Joe’s tacklebox?” after a saltwater lecture series I was invited to, when the master of ceremony posed that very question. At the time it caught me off guard, because it involved offshore fishing and we really didn’t carry much variety in those days. Also, we were tournament fishing for big kings and doing pretty well, and there were three thousand attentive faces in the University of Houston auditorium and I wasn’t eager to disclose what few secrets we had. Not for a paltry lecture fee, anyway.

In the years since, I’ve walked the jetties and piers, passing many fishermen, and sometimes stopped to see what’s in their tackleboxes left wide open. Most carried a few odds and ends—lead weights, hooks, a lure or two, popping corks and whatnot. Reminding me of my first humble tacklebox way back in Lubbock, where we fished for bullhead catfish in the city’s drainage ponds, Maxey and Clapp Lakes, the scant water surrounded by bare dirt in those days. Back then, my tacklebox always smelled of 3-In-1 Oil used to keep that Zebco reel functioning, along with bobbers, basic hooks and lead weights.

Just two weeks before we moved to the coast, I began reading up on the new plastic worm jigs used in salt water, along with MirrOlures and Bingo plugs. A bigger tacklebox was clearly needed. And heavier gear; it turned out that huge alligator gar prowled in the Port Arthur city limits, 50-pounders capable of considerable mischief. Fighting them with a Zebco outfit would have been bogus and sad. There would also be dozens of offshore partyboat trips in my near future.

So we crossed the state in June and after a long, hot drive without A/C and two unhappy cats eager to leap from the windows, which they did in Beaumont, we finally arrived in Port Arthur. A huge ship steamed past our house and I ran across the street to the ICW and caught croakers on bacon while the moving van was still being unloaded. From there it was off to the races and by autumn, often after school, I’d racked up several dozen slot-size redfish and some big gar. My tacklebox remained modest, I was on foot or bicycle, but it carried sufficient gear. Details of its contents back then are hazy today but that box was small enough and must have been somewhat watertight, because one day I took a shortcut and swam from Pleasure Island across the ICW when a ship or barge wasn’t in sight. Just side-stroked for 400 feet or so, with the box and Zebco outfit. (Not recommended today, without a life jacket.)

As the years passed, tackleboxes increased in size with the public, but today the big ones have generally fallen from favor. You don’t see many around, although I do have a friend whose box is difficult to lift, filled with what appears to be hundreds of items dating back to the late-1970s. It weighs as much as a small child, according to a mutual friend and guide who took us out on occasion. It also took up precious room in the boat, a solid obstacle on deck when big fish were gaffed and landed around it. That big box has seen many ling dragged aboard, and must have stayed latched during such critical times. During late high school my own smaller box, left unlatched, was knocked end-over-end by a 40-pound ling, and tackle spewed  everywhere. I briefly moved up to a bigger three-tray box, but it was washed off the Sabine jetty by the wake of a passing crewboat. Because it was carrying partyboat tackle, including heavy snapper weights, it upended like the Titanic, took on water and sank forever. While I fumed and paced on the rocks nearby.

Today I mostly fish inshore waters and have narrowed my tacklebox gear down to three clear, plastic boxes that will fit in a center console’s cabinet or even a five-gallon bucket. Wind and spray resistant, those flat boxes sit beside me on a jonboat’s bench, lower than the gunnel. They can easily be carried on the jetties or beach, and fit in the back of a fishing vest for long wades. Cheap, too. One box carries soft plastics, the next hard baits and plugs, and the last, bait gear with hooks, swivels and lead weights. Some days, depending on what we’re doing, I’ll only open one of these three boxes. Other days we sling plugs or plastics until the tide is right, and then switch to bait at the jetties or flooded shorelines where the big reds bite.

A dozen more clear boxes with all sorts of tackle remain at home, and they’re used to replenish losses after a long day on the water. If some color or pattern gets hot locally, I can dig through the garage boxes and maybe find something useful for next trip.

There are all manner of colorful soft plastics out there, very different from the days of the (great) Boone’s Tout Tail that was almost our only choice. (Some of the old timers still call salt water soft plastics “Touts” out of habit.) Today, I mostly favor six-inch twister tail worms on redhead jig heads, the worms either chartreuse or a white with red tip. The guides who first showed me these while guests on my boat, pulled out these long jigs while we drift-fished. After twin 50-trout days, including three large Spanish mackerel, I became a believer. They advised using high-vis in the morning with the white worm, and switch to green in the afternoon. The bigger six-inch variety is made of a sturdier plastic than common four-inch twister tails.

My box also carries a few DOA shrimp that pinfish and puffer fish are fond of, but also trout and snook. The red jig heads have really sharp, 6/0 hooks that even a small trout or flounder can grab. They’re 3/8 ounce in weight, made by Bass Assassin, have yellow eyes and three ribs to keep the worm securely fastened. If they’d been available 40 years ago, today’s daily bag limit for trout would probably be three, at most. Jig heads back then carried a small hook.

These contemporary 6/0 jig hooks work great, even for anglers who have difficulty  setting the hook no matter how much they’re encouraged. When I tell them I want to see that rod bent like a banana, they just smile and keep reeling, the rod straight. But they still catch fish with this jig.

Gulp jigs are the exception; they have to be stored in a funky liquid bath that will leak if it isn’t kept in a sturdy container on a flat surface.

Hardcore trout waders often stick with their tried and proven “killer baits,” as Joe Doggett calls them. I use only a few models, like Rapala’s X-Rap, Mirrolures in the surf or at the jetties, then Heddon’s Super Spook Junior or Storm’s Chug Bug for the flats, and of course, gold spoons. Not the little spoons, but the Johnson Sprite with treble hook in ¾-ounce. Also the Dixie Spoons that will throw a country mile—very handy when wading the surf and trying to reach green water beyond sketchy, muddy breakers.

And that’s it. Not a big selection, by any means. But they’ve caught some fine fish in the areas I prowl. Limits of fish. We don’t throw plugs every day but when we do, those are my go-to items.

The third box carries either egg or much-preferred one- and two-ounce bank sinkers, the latter best around rock jetties but also for slinging a long ways with a natural bait. Not so good in breaking surf, where they roll with the tide. As mentioned in a recent issue, I like to anchor against grassy bay shorelines and pitch these weights way out there where big trout and redfish can’t hear the slap-slap of waves on boat hull. Set out five rods with finger mullet, and watch what happens. I also carry small bullet lead weights; rig one under a cork, a foot above a 2/0 J-hook, with a feisty pinfish, and leave it upwind while making a drift.

My go-to hooks are the black, Mustad Ultra-Point in 6/0 size, deadly on redfish and big trout. With this hook, both species are easily unhooked and released, which we always do with sow trout full of eggs. The fish hook themselves and there’s no mad dash to grab a bent rod. Some fish swim towards the boat, and I still don’t mind reeling and leaning back until the rod takes a mighty bend. My swivels are small and black. I keep a spool of 30-pound line for leader, and tie my own. Lately, I keep a few extra leaders pre-tied, because a big stingray or shark can take the entire rig, since we use 12-pound spin tackle. If catfish and small stingrays bite, it often means the party is over and it’s time to move. I still unhook hardhead catfish manually if the hook is showing, but definitely not stingrays.

Anyway, that’s my tacklebox story, and I’m sticking to it.