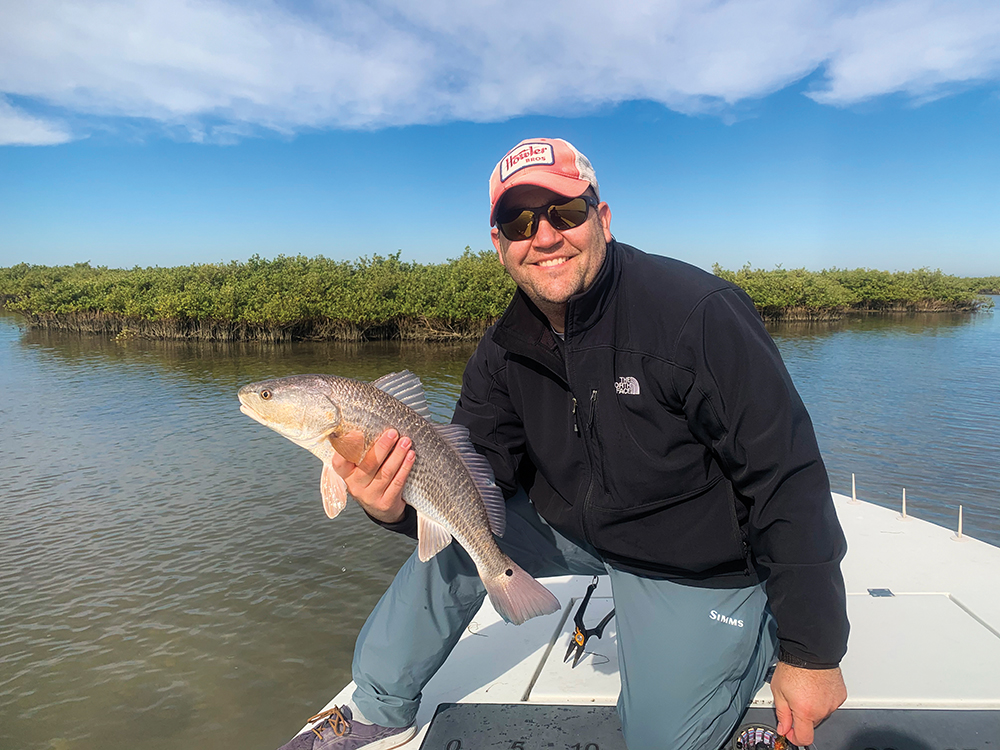 To most folks, March means springtime. For myself and anyone else who enjoys the sport of sight-casting, it means wind. And lots of it. Yes, the waters are warming and fish are getting more active, but does it really have to blow so dadgum hard…and often?

I know there are a lot of folks who love to say, “If it ain’t blowin’, we ain’t goin’.” Those people apparently aren’t poling skiff guides. They likely don’t swing a fly rod either. Being the guy on the poling platform with a fly zipping past my head makes me wonder whether or not I mashed that barb down. In my experience the likelihood of getting a new piercing greatly increase at wind speeds above twenty miles per hour.

So do we just give up on fishing until it calms down a bit, or do we figure out ways to work around it. Or perhaps even use the wind to our advantage. Let’s face it, we’re going to fish anyway and as long as it’s safe, I’ll go. I will, however, give my clients the option to reschedule if they’d rather wait for better conditions. Small craft advisories, common this time of year, are a definite no-go. As a younger man I pushed those limits and learned a few tough lessons.

Of course the best option is to go when it gets right. There will be some short windows of light winds, but the forecasts are usually off by a day or two. If I’m just going fishing for myself I’ll watch the forecasts and have the boat sitting on ready. People with flexible schedules and the ability to drop and go definitely have the upper hand here. I’ll often get up, check the winds and go back to bed. When it’s right, all I have to do is go get in the truck.

I fully understand that not everyone has that option. I was once in that same situation. Back then if I had plans to fish my days off nothing short of gale force winds would stop me. Well that may not be entirely correct. We once spent a pretty miserable three days in a floating cabin on Baffin, dealing with steady 40-50 mph winds, with the gusts pushing the mid-50’s the whole time. On the plus side, we still caught fish. We only had to adjust our expectations and strategies.

There are several things you can do to up the odds when the winds are howling. First off is adjusting your expectations. Understand that you’ll likely be doing more blind-casting than sight-casting. While it isn’t as much fun, it can be a lot more productive. A poling skiff can only be slowed down so much and you’re often running over or past the fish before you can see them. I call it drive-by fishing. Make your shots quick and accurate because you’ll only get one.

The better option is to look ahead along the shoreline for targets and make the best use of each cast. Targets can be sandy potholes, patches of shell, or maybe just a nice little cove. All are worth a quick shot. But the ones I’m looking for are the tips of points or islands with the wind blowing water around it. A strong wind can push a lot of water. When that water hits a shoreline it travels along it working towards the point. The current is strongest on the point and creates an eddy on the back side. Baitfish follow the current and seek out the shelter of the eddy. Gamefish lurk in these areas waiting for a meal.

Oyster reefs can also alter wind-blown currents. Learn to look for irregularities and take advantage of those instead of just casting in the general area. Breaks in the reef, longer points, holes, etc., are good places to shoot for.

One way to fish an area more thoroughly would be dropping the Power Pole as you see something worthwhile. Employing this method lets you pick it apart with multiple casts and cuts down on the pressure to make quick and accurate casts. Or you could just park the boat and wade the spot. It all depends on the fish that day. If you feel they are scattered out you might want to do the faster drift method to cover more ground. If they’re stacked on structure, the stop and go method may be the formula for success.

Another productive method that will be pure blind-casting is to hit the wind-blown coves. Wind blowing into a cove pushes current much like it does on those islands and points. The difference is that the current has no place to go and stacks into the back of the cove. Baitfish get pushed along on the current and become trapped where gamefish can take advantage. This water will most often be dirty and look like a washing machine so you’ll want to throw louder, flashier offerings. While I’m not real big on it, a popping cork and GULP combo can be very effective in that situation.

Constant hard wind sure can get in your head and make it easy to get discouraged. Give these methods a shot and see how it works out. Something I learned during my tournament fishing days, no matter the conditions, somebody is going to come in with some fish. Those anglers worked the problem and kept a good attitude. Fish gotta eat.