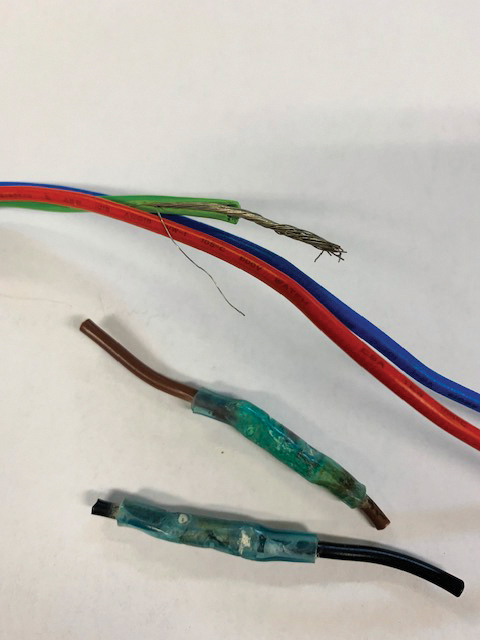 The attached photo shows two separate repairs where the electrical problem was intermittent. The first is a livewell pump that would not work under a load yet operated consistently with the boat on the trailer in a no-load situation (reference connectors in the lower portion of photo). Detecting a voltage drop was the key to discovering the source of the problem. Over time, corrosion had developed inside the shrink-wrap; however, the shrink wrapping was not where the problem began. The problem started when the crimping tool pierced the cable sheathing above the wrap when the connector was installed, which allowed moisture to enter the wire itself and create a compromised connection and intermittent failure.

The second wiring issue, which was also intermittent, was discovered in the jackplate circuitry. The jackplate would operate normally while the boat was stationary in the water (i.e., jackplate under less than full load.) When underway, the jackplate could not be lowered. The problem was traced to the jackplate switch, which was attached to the throttle. When the throttle was advanced, the green wire at the top of the photo would lose continuity inside the insulation. The point where the break occurred was hidden behind the throttle lever, and, when accelerating, the connection would separate the strands in the wire that controls the downward movement.

In conclusion, voltage drop tests can save a great deal of time and help pinpoint the exact location of electrical problems.

Have a great fall and winter season on the water.