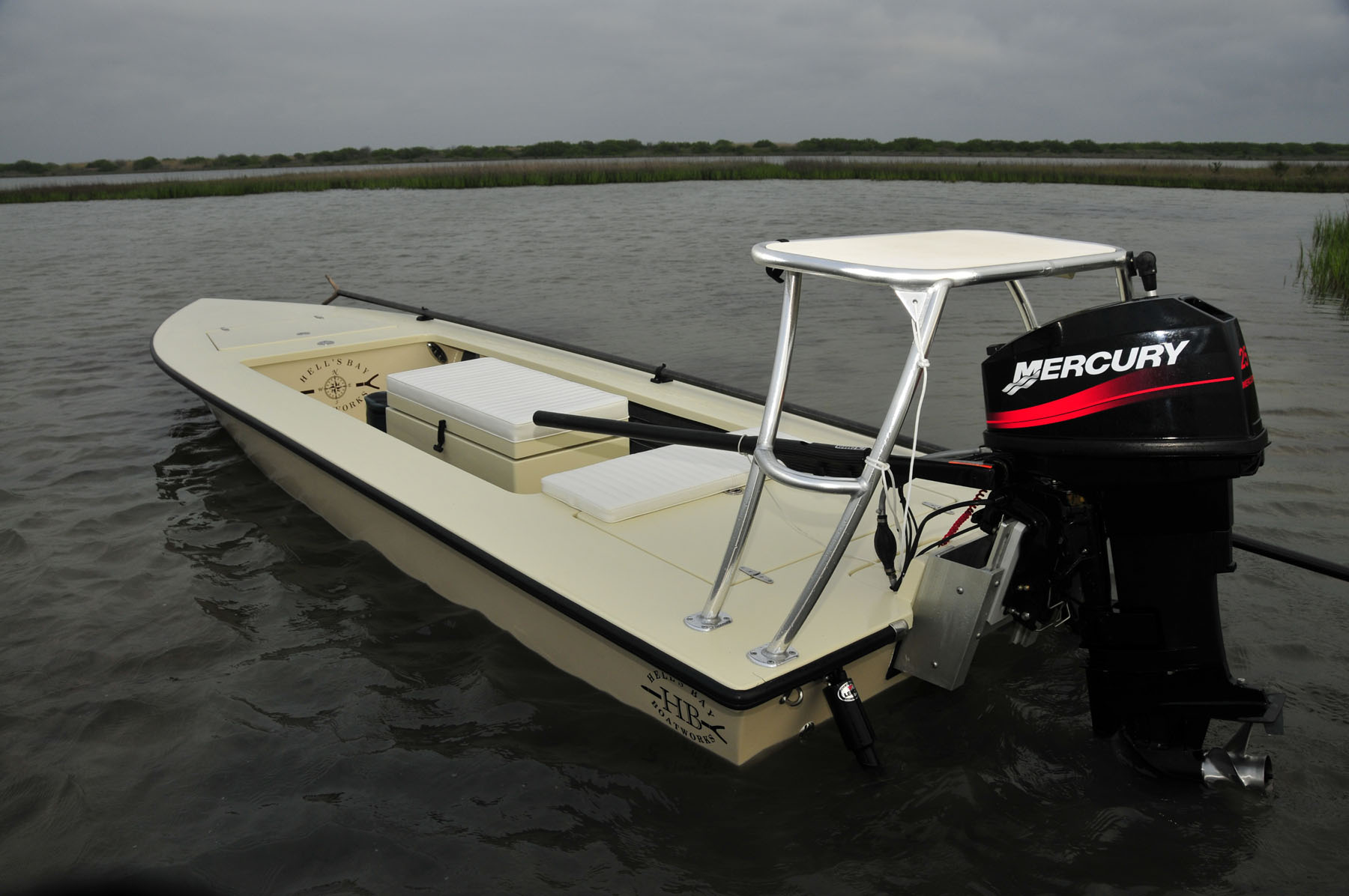 Recently, while driving through Port O'Connor, I noticed one of my old Hell's Bay skiffs sitting on the trailer out in front of Coastal Bend Marine. I had heard that the friend that I had sold it to was in the process of selling it so, being the sentimental fool that I am, I felt it necessary to pull over and pay my respects, not knowing where it might end up next or if I would ever see it again. Wow, the memories that that old boat brought back. Heck, I think I might have even been a little teary-eyed. Anyway, after all the nostalgia was done with, I could not help but notice how much difference there was between that old skiff and my newest Hell's Bay.

I still remember the day Hal Chittum asked me what accessories and options that I wanted on it. "As little as possible," was my reply.

And, when it arrived here in Texas, it was about as simple of a skiff as you could possible imagine. Other than the steering wheel, throttle and trim tab controls, it only had two switches- navigation lights and an on/off for the bilge pump. The deck was clean and free of obstructions and potential objects waiting to reach out and grab a fly-line and the accessories were kept to a minimum to facilitate easier on-water-repairs should they be needed. There was also plenty of dry storage which meant there was rarely anything out on deck other than the ice-chest. It was the perfect skiff. In fact, if it had any flaw at all, it was its owner.

Back then, I really believed in the old "keep it simple stupid" philosophy. It is a concept that has served me well for years while poling sports around looking for redfish here in Texas and while rooting around the mangrove swamps of the Everglades looking for something big and mean to make a reel scream.

Well, here I am now, at the fish camp, three skiffs later, looking over my newest incarnation and thinking- my how my tastes have changed over the years. The newest skiff is smaller, runs with a lot fewer horses and the basic operation is controlled with a tiller handle and a small control box rather than a console filled with wires, switches and hydraulic steering. And, while I have simplified the basic operation of the boat, I have grown fond of certain amenities such as redundant controls for the trim tabs and tilt as well as cockpit and deck illumination for night-time operation. These are things that I had on my last skiff and they are included on this one. I guess one way to look at is- this newest version is the perfect example of what would happen if you cross-bred my last four skiffs.

Now, after finally getting the break-in hours on the engine and after having the opportunity to guide a couple of trips in it, I sit here and stare and cannot stop thinking about the changes that I might or might not make when it is time to order the next skiff. While I am very pleased with this particular craft and know that I will have seller's remorse the day I part with it, I already see some things that I would like to change. For one, even though I really like having the dual-control stations and the lighting, I realize, after having fumbled with the numerous switches on a couple of occasions, that there are way too many and it becomes confusing at times. I think I have now come up with a way to have all of these extras but eliminate four of the thirteen switches and probably about ten pounds of wiring.

The next thing on my agenda is to find a more comfortable seating arrangement for passengers. For this I might actually have to actually steal some ideas from my friend, Mr. Flip Pallot. Flip and I are currently running the same Hell's Bay model and I have to say that, he came up with a pretty damned sexy set-up for his that provide certain comforts for passengers that mine does not. In fact, I am ashamed to admit that, he told me of his idea while our boats were being concurrently built and I just could not see myself making a commitment to, what I thought, were pretty radical ideas at the time. Well, I have since had the chance to run and fish from his skiff and now have to say- I should have listened. Anyway, I think I am definitely going to have to incorporate some of his ideas into the next one.

I guess what it all boils down to is that a skiff or boat, at least for me, is a very personal thing. In fact it would be safe to say that boats are my life. Since the day I turned 18 I have made my living on boats. I have evolved to the person I am because of boats and every boat or skiff that I own is an evolution that reflects who I am. Case in point, I am only a month or so into this one and I am already thinking about the next one. How sad is that?

Fair winds and following seas to you all...