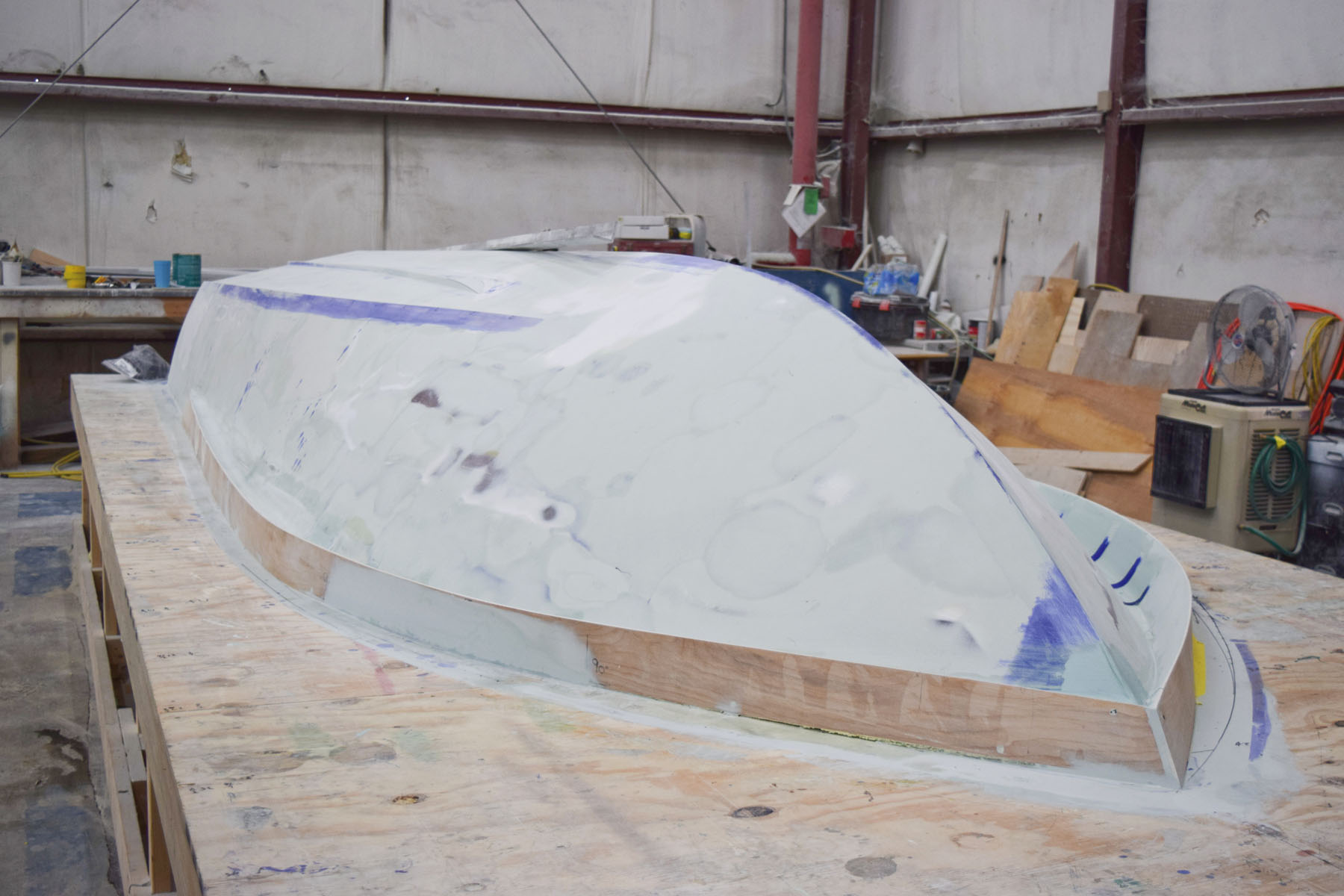 Looking at her from the bow.
A few years back I was shopping for a poling skiff and gave Kevin Fenn over at East Cape Skiffs a call. I was about to go from part-time guiding to making it a full-time operation. I knew I wanted something that didn't exist. I have to cross open and sometimes rough water to access some very shallow marshes. I wanted a dry ride that could handle chop without getting my customers wet while still letting me pole two customers and gear into places where the top of a redfish's back sticks out of the water. As we went through the models and my needs I started feeling like Goldilocks–too big, too wet, too small.

I'd first met Kevin and co-owner Marc Page several years prior while fishing the old Extreme Edge Kayak tournaments in Florida. At that time they were just getting started and had come out with their first model, the Gladesman. It was a really cool little skiff that was basically an overgrown canoe with a motor. It would float as shallow as my kayak with two people and a full load of gear. However with two young girls and a wife who all love to fish it just wouldn't work. It also wouldn't work for my guiding.

We kept in touch over the years and I watched as they added new models to the line-up. First came the Lostmen. It was based on the Gladesman, but wider and more stable with a sharper entry to handle some chop while maintaining some crazy skinny draft numbers. The deck layout and ample storage were perfect for a guide boat. It was big enough to handle my needs, but not ideal for the open water I needed to navigate.

Then along came the Caimen. A totally new design for them that is a fishing machine. They incorporated spray rails which help greatly in big water while still getting skinny. It also poles like a dream, maintaining a line whether headed into or across the wind. It was just a bit too tight on the bow for two anglers. If I were strictly a fly guide with one angler on the bow at a time it would be awesome.

Their next model was the Vantage. It's a beast of a poling skiff based off of the Caimen hull, just bigger in every way. Longer, wider, bigger spray rails and capable of handling a lot more horsepower. No doubt it could get my customers through the roughest conditions in style and comfort. My only concern was poling draft. Bigger and drier are awesome, but if I can't get to my fish none of that matters. Not that it isn't a skinny floating boat by most folks standards, I just happen to like getting where most folks can't go.

Throughout our conversation Kevin was honest about the advantages and disadvantages for each model. He could've probably steered me towards the Lostmen or Vantage by downplaying the parts I was concerned about. I've often said every boat is a compromise and I was about ready to settle into a Lostmen with some optional spray rails added to the bow. I jokingly told Kevin all I really wanted was a skiff that could handle big water like the Vantage with the deck layout of the Lostmen, and pole like a Caimen.

His reply, "How soon do you have to have it?" Wait, what? He then proceeded to tell me about their latest creation dubbed Project X. The big water easy poling hull of the Caimen, the wider deck layout of the Lostmen and the huge spray rails of the Vantage. It would be ready for production in a few months. I could wait.

The new creation was eventually named the Fury and I have hull #6. Dry, stable, easy poling and skinny. Of the eight boats I've owned this little skiff is hands down my favorite. When asked how I feel about the Fury my response has been, "If this boat were stolen from me tomorrow I'd order another one." I've never felt that way about any of my other boats three years in.

So now that the time has come to order a new skiff I knew exactly what I wanted, a Fury with their new optional flush scooter deck. Simple enough. I headed out to the ICAST trade show in Orlando with the intention of visiting the shop and sitting down with Kevin to order the new boat. I also wanted to get an up-close look at their latest skiff, the Gide. It is the replacement for the Gladesman. A little wider and more finished, but still a nimble little super skinny water boat.

As luck would have it I ran into him the first morning of ICAST. We chatted a bit and confirmed a Saturday meeting at the shop. I told him he could go ahead and write me up for a scooter-top Fury and we'd work out the details of the build when I got there. A sly grin came over his face and he replied, "Maybe not, I've got something you need to see first." Well hell, nearly a full week of wondering what this new project could be.

Saturday morning I pulled into the parking lot bright and early. Kevin was there with Paul Volkerson, owner of V Marine. Paul is a good friend of the East Cape family and has put in a lot of hours running all of their boats. Just inside the doors sat an upside-down hull. It was a bit rough looking and obviously a prototype, but with some really sweet lines. Good volume in the bow and carried a lot of deadrise all the way to the stern. Completely different from other ECC hulls, yet still with those huge undercut spray rails. The rails are a lot higher than either the Fury or Vantage, eliminating any chance of hull slap when poling directly into a chop. Paul has been running the prototype and confirmed that it is an awesome ride. The extra volume in the bow keeps it from diving into large waves or wakes. He said he's tried to bury the bow and it just won't go under. Hmmm. Guess I'll be waiting a couple months to see how this thing turns out before I sign on the dotted line.

Out of curiosity I had been wanting to get out on a Vantage to see if I was missing something. It's the only model I hadn't ridden. Kevin set me up to fish the Indian River with Captain Jesse Register of Flyin' High Charters. The next morning I met up with Jesse and headed out. I have to say I really like the ride. We busted through several boat wakes at high speed and it was rock solid. Jesse put me on several 20+ pound reds in skinny water, but they were the spookiest I've ever seen. Most of them fled before we could even get off a cast. Eventually I had one clean shot at a huge tailer. The cast was good, the fly landed softly in the perfect position and swoosh... he was gone like I'd whacked him in the head. Next up were rolling tarpon in the 30-40lb class. They were up on top over shallow grass. Tarpon make me stupid and I blew the first shot. No worries there were more. Several refusals later and I decided it just wasn't my day. I went to the platform and put Jesse on the bow. The Vantage surprised me a bit as it poled like a much smaller skiff. Very responsive and easy to maneuver. It also went a good bit shallower than I thought it would. Jesse didn't have any better luck than I did so we concluded it must be the fish. It obviously couldn't have been us, right? If you're ever in the Titusville area look him up. Great guy running a damn fine boat in an absolutely beautiful place, full of crystal-clear water and miles of grass.

So will it be another Fury, a Vantage or perhaps the new "Project Y"? I'll let you know in a couple months.