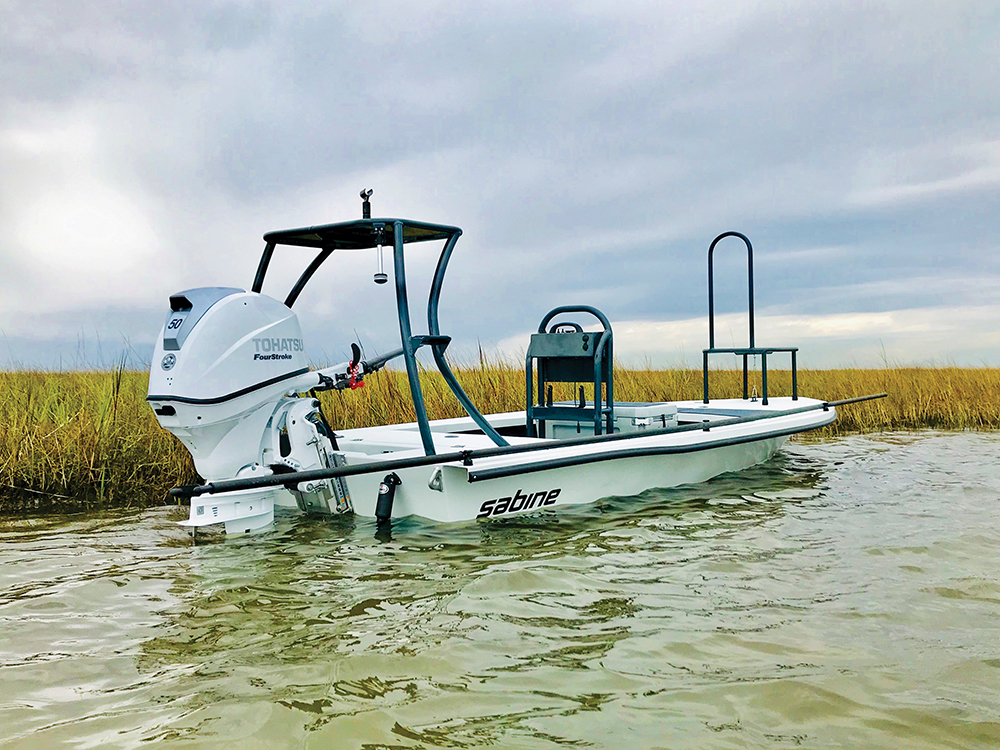 When I picked up my brand new East Cape Fury, the plan was to do the typical guide thing and flip her in about eighteen months. Well, here I am almost seven years later and she’s still sitting in the driveway. That skiff has made a whole lot of memories for me, my family, and most importantly, my customers. You don’t stay in the same boat that long if you don’t love it, particularly if you spend as much time in it as a guide does.

I’ve known Brian Little for a good many years, long before he started building skiffs for a living.  Even way back then he was building boats for himself and I was always impressed with the quality he turned out from his garage shop with minimal equipment. When I heard he was attempting to build a poling skiff out of aluminum I’ll admit to being a bit skeptical. We’ve all been in a jon boat at some point. They’re inherently noisy. And noise is the enemy of poling skinny water trying to sneak up on reds.

I kept an eye on his progress with this project and was impressed with what he was coming out with. I know how picky Scott Sommerlatte is about boats and when he went with a new Sabine Skiff it certainly caught my attention. As a few more friends got onboard I started asking questions of them. Everything was positive. Fit, finish and performance were all there. And yes, they really were quiet on the water.

But it takes me a while to make up my mind about a boat. A couple years ago at the Houston Fishing Show, Brian had a booth with a new Sabine Versatile sitting in it. It was the first time I had laid hands on one and I went over it pretty carefully. A year later at that same show Brian showed up with two layouts of the Versatile as well as a Sabine Micro, a smaller version of the original. I spent so much time in his booth I felt like I needed to pay rent. By the end of the show we were having some serious talks about me getting into one.

Life gets in the way and I put it on the back burner. Then a friend put on a fly fishing/skiff get together at his house in Bayou Vista. Brian was there with a couple of skiffs and we went for a ride through the marsh and out across a pretty damn bumpy Jones Lake. By the time we got back to the dock I was sold. We shook on it and the process began.

This is my fourth poling skiff in sixteen years and I’ve learned a lot about what I want in a skiff. I’ve spent countless hours on the platform watching how customers move around on the boat, asking them what they liked or didn’t like about my skiff, as well as just thinking about what I could do to have a better office.

One of the great things about dealing with custom builders like Sabine Skiffs and East Cape is their ability to build pretty much whatever you can imagine, within reason, of course. Brian and I went over my wish list and he showed me examples of custom touches from prior builds.

My plan involved segregating my boat into a customer area in the front and my working space aft. The less clients have to move around on the skiff, the more comfortable they are. It also makes my life easier up on the poling platform.

I went with a tiller steer outboard for simplicity and weight savings. With that I wanted a grab bar built into the center of the boat. My original idea of something to just hold on to while operating the tiller morphed into a highly-functional center of operations. Brian came up with a small box to mount the switches for the jack plate, tilt/trim, trim tabs, lights and bilge. All can be reached without moving my hand from the grab bar. We also came up with a way to mount my very large Humminbird Solix 12 GPS so that it was out of the way, yet visible when operating the boat. I can also view it from the poling platform, which will be a big bonus when I can take a look at the satellite overlay while prowling around and exploring the back lakes.

Another bonus to this center helm concept is that it provides a backrest for the cooler seat position in front of it. So now the second angler taking a seat while his buddy is on the bow can sit comfortably and still see all the action. On the Fury there really wasn't a good place for the second angler to relax and still see what was going on. Problem solved.

With most skiffs, the under-gunnel rod tubes are set up for the rod tips to go under the front deck. This puts the reels near the stern and necessitates the angler walking to the back of the skiff to retrieve his rod. The problem came about when it was time for the guys to switch positions. Two anglers walking back and forth along the sides of the boat tends to make the skiff a little tippy. And with some of my larger guys it could get a little uncomfortable for me up top. To solve this we simply reversed the rod tubes. Now, rods can be stored or retrieved without leaving the bow area. This will also come in handy when that school of marauding jacks shows up and you want to switch quickly to a heavier stick.

The bow deck of the standard Versatile ends with a slight overhang, just past the front bulkhead. I had Brian build mine with an extra foot of overhang. I wanted to go as far as we could without interfering with the rod storage, for two reasons. A larger front deck is always a good thing. When I’m running trips with conventional gear I’ll often have two guys on the bow and the larger deck accommodates them much better. Also, the overhang provides a great space for clients to stow a small bag with flies, leaders, snacks and rain gear. All this is out of the way, yet easier to access than if it was inside the bow hatch. An unexpected bonus is the extended front deck also serves as a comfortable footrest for the seated angler.

I can honestly say that Brian was a pleasure to work with throughout the design and build process. He kept me updated at every step and sent photos regularly. Several times I got calls asking exactly where or how I wanted something. Things as simple as switch placement were confirmed and adjusted. And, I would be remiss if I didn’t mention the awesome Seadeck work Brian’s wife put together. Kaylor can do pretty much whatever you dream up, including a really large measuring board on the front deck for those big bull reds in Louisiana.

I just got her home yesterday and couldn’t be more pleased. By the time you read this I’ll have made my shakedown runs, caught the first red off of it, and be ready to run some trips. Give me a shout and we’ll get you out there.