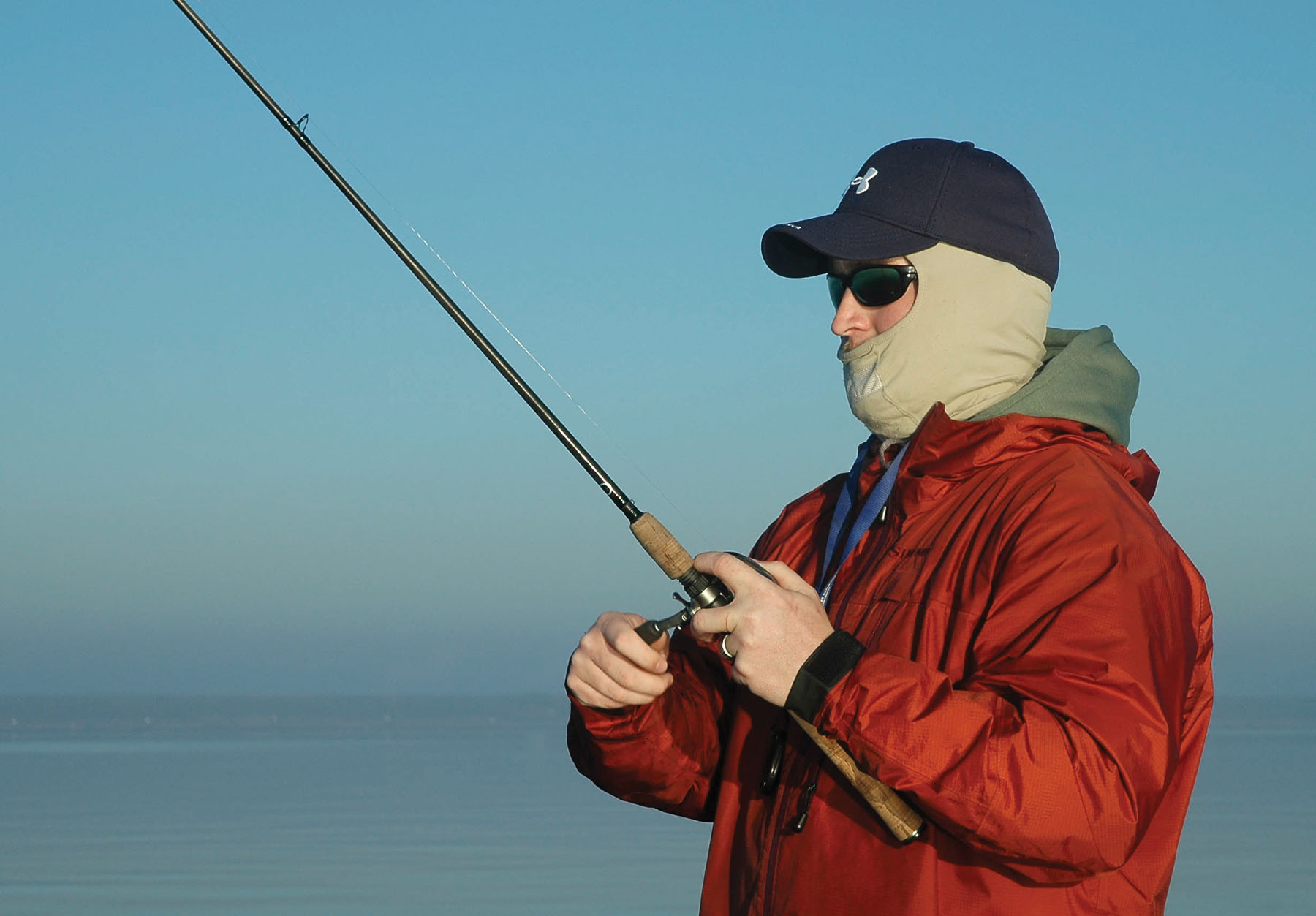 While we’ve been sold for quite a while on covering up with clothing and sunscreen to protect skin, it is only recently that anglers have begun using better shades to protect their eyes.

Sunglasses. It sounds so simple. You know you need some shades when you're out on the water in the bright sunshine. But which ones are best? Ask that question among a group of fishermen and you're liable to get a bunch of different answers. Most hardcore anglers have a favorite brand, style, and lens color. And everyone knows you need polarized lenses to see into the water. But can you explain why you've made those choices?

I thought I had a pretty good handle on the subject. That is, until I was asked to write about it. I started my research early one evening and the next thing I knew it was two o'clock in the morning and I was still reading. The amount of information available on this subject was staggering.

First, the scary part. We all know the dangers of UV (ultraviolet radiation) to our skin. It's been hammered into our thick skulls for years and now I see even the most hard-headed lathering on the sunscreen. Who does not know a fisherman who's had a few "suspicious" spots removed or even lost a slice off their ear. Not much has been said though about the damage UV does to our eyes. There's lots of eye diseases including glaucoma, macular degeneration, and cancer that are thought to be directly related to UV. And on exceptionally bright days the amount of UV entering your eyes can cause photokeratitis, - sunburn of the retina - causing temporary and possibly permanent loss of sight.

A recent study found UV exposure at its peak in the early morning and late afternoon during certain times of the year. I always figured it was worse with the sun high overhead. But according to the study, the amount of UV-B reaching our eyes during these times was nearly twice that of the mid-day periods in the spring, summer, and fall. At the time of the Autumnal Equinox the greatest exposure was found to be at 9:00 am and between 2:00 and 3:00 pm. During winter the peak exposure moved back towards the middle of the day.

Now for the good news. Sunglasses can be coated to prevent UV penetration into your eyes. The sun's UV rays are grouped into three classifications based on their respective wavelengths and frequencies; UV-A, UV-B, and UV-C. We are mainly concerned with the first two as the UV-C rays are absorbed by our atmosphere and do not reach the earth's surface. UV-B has been found to be the main culprit in causing eye disease while the effect of UV-A on our eyes has not been definitively answered. Thus, it is important to make sure your lenses block these two classes of UV. This is easily done by purchasing sunglasses labeled as blocking "99 - 100% of UV light" or "UV absorption up to 400nm" which would be equal to 100%. Do not settle for anything less. Also, the American National Standards Institute (ANSI) has provided a standard for non-prescriptive eyewear referred to as ANSI / Z80.3. If your glasses have the ANSI rating you can rest assured that they meet or exceed these minimum safety requirements. However, ANSI is a voluntary organization so it is possible that glasses meet the requirements without having the ANSI label.

The next thing to look for is the "polarized" label. Unfortunately not all sunglasses that claim to be polarized actually are, but there is a simple way to determine this. First, it helps to understand what the term means. The physics sites made my head spin a bit, but I think I've managed to boil it down to this: Sunlight is an electromagnetic wave with electric and magnetic vibrations occurring in multiple planes. This is referred to as unpolarized light meaning it is vibrating in a variety of directions. There are several ways in which light becomes polarized. What we are concerned with is polarized light caused by reflection. When the unpolarized light strikes a non-metallic surface, such as water, a percentage of the waves become polarized along a horizontal plane. The angle at which the light strikes the water's surface determines the degree to which the vibrations become polarized. The lower the sun's angle the greater the reflection, or glare. We see the reflection as white glare when the intensity of the light is above the level our eyes can absorb. Light is measured in lumens. Average Indoor light is around 500 lumens. In the shade it is around 1000 lumens. We start to get uncomfortable around 3500 lumens and see white glare when the level reaches 4000. Again, depending on the sun's angle, we're looking at upwards of 6000 lumens on the water. Prolonged exposure above 10,000 lumens can cause temporary or permanent blindness.

The magic of polarized sunglasses occurs because they have a layer of vertically oriented long-chain molecules applied to the lens. These molecules completely block out any light waves that are perpendicular to their alignment, thus the horizontally polarized glare is erased. Other light waves are allowed to pass through as visible light. Perfectly vertical light waves pass through at full strength while other angles pass through at varying degrees. Polarized lenses will be most effective when the sun is between 30 and 60 degrees above the horizon with 37 degrees being the absolute optimum. And keep in mind that we are talking about flat water. Ripples and waves will change the angles of light wave polarization and thus change the effectiveness of your glasses

Now don't you feel all educated? So, if you want to know whether your sunglasses are polarized you need to perform a simple test. Hold your glasses in front of you aligned as if you were wearing them and look at the glare on the water or any other non-metallic horizontal surface. The glare should be mostly blocked. Slowly rotate the glasses and watch what happens to the glare. If you have polarized lenses the glare and brightness should increase and max out when the glasses are perpendicular to the glare-producing surface. If you notice no change then they are not polarized and they're not doing you any good out on the water.

Perhaps the most debated option on sunglasses is lens color. It can make a huge difference in how effective your glasses are for different applications. The myriad tints and hues available greatly affect the way you see the world. Grey is likely the most popular selling tint for all-purpose sunglasses across the United States. Being a neutral color, grey provides for nearly natural color perception throughout the light spectrum. Depending on the degree of tint, it can also provide the most overall darkening effect in very bright conditions. This is generally the preferred color for offshore anglers and for driving. Green and blue tints also fall into this same category, though to a lesser extent than grey.

While offshore guys are most often concerned with dimming the overall light intensity, inshore anglers are generally more concerned with seeing through the water to locate underwater structure and fish. For this you need a lens that increases your perception of contrast. There is a huge range of lenses that fit the bill for this. Every manufacturer has a different name for the various colors covering this spectrum. Rose, amber, copper, and vermillion are but a few. All of these filter varying amounts of different light waves. The increased contrast provided by these lenses really does improve your perceived visual acuity. They can literally make a redfish appear to pop out from its surroundings. If you like to sight-fish in shallow water, these are the colors you need to check out. From my non-scientific research over the years I've found that what works best for one angler isn't necessarily the optimum color for the next guy. Some studies indicate that it relates to individual eye color and seems to make sense when you think about it. People with light blue eyes perform best with the darker hues while those with dark brown eyes prefer the lighter tints. Folks in the middle generally report that they don't see much difference.

Another point of debate is mirrored lenses. Some folks say they make no difference while others swear by them. Tests prove that mirrors do make a small difference in the amount of light transmission through the lens. The vast majority of light is already being filtered by the polarization and tint, so it stands to reason that it might be difficult for some people to realize that the mirror is making a difference. I feel that mirrors are generally a matter of personal preference regarding style more so than function. However, if your goal is to eliminate as much light as possible then you might want to go this route. Most of the higher-end manufacturers will provide a light transmission value. This number represents the percentage of light allowed through the lens and generally falls between 8 and 20. When shopping for your glasses, remember that the light outdoors will be much different than inside the store. Ask to take a couple pair outside to test the differences.

And perhaps the most contentious aspect of sunglasses - price. There is a huge difference in price points with some selling for as little as $15 while the upper end can put you over three bills. Then again, most of the equipment we buy to pursue our favorite pastimes fall into this trap as well. And generally speaking you get what you pay for. I tend to gravitate towards buying quality equipment. Days in the field or on the water are too special for me to go bargain and risk disappointment. But with sunglasses it stands out as even more important. We're talking about the health of our eyes.