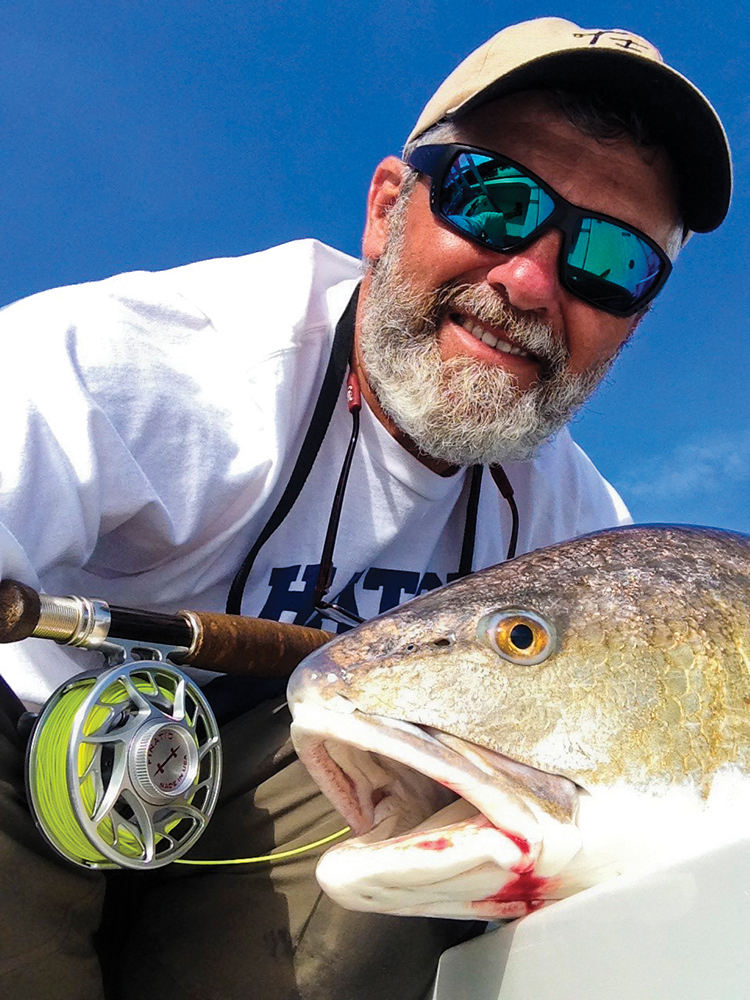 “You’ve got a red at eleven o’clock…about fifty feet moving left to right.”

“Angling towards us now. Got it?”

“Yeah, I see the wake but I never saw the fish.”

As a guide poling the flats for a living, I can’t begin to tell you how often that scenario plays out. The sightcasting game can be tough when you don’t do it very often. Eyes that aren’t accustomed to picking out the shapes, colors and subtle hints of a fish sometimes have a hard time getting adjusted.

I certainly have advantages over my customers. First off, my position on the platform elevates my line of sight giving me a better angle to see into the water. I also have thousands of days practicing my craft and looking at fish under a wide array of conditions.

One thing you can do to up your game is choosing the right sunglasses. On a recent trip one of my guys was having a really hard time spotting fish. He had taken the bow at first light without the need for sunglasses. We were chasing wakes and looking for surface signs of fish. Once the sun got up a bit he reached into his bag for his glasses. He was on the bow with his back to me so I didn’t pay much attention to what he was wearing. I saw from the side they were Costas so I knew he had some quality glass.

After several failed sightings of some fairly easy fish he turned toward me and I knew immediately what the problem was. The blue mirror told me his lens was a grey tint.  These reds were holding on a dark-green grassy bottom and the neutral grey glass was making them blend in.

I always carry at least a couple extra pairs of Costas in my boat bag. We took a break and I dug out a pair I thought would fit him. He put them on and stepped back up on the casting platform. “Wow! The grass looks so much greener.” The next fish we spotted at nearly the same time. The rest of the day went a whole lot better than the first couple of hours.

While grey lenses are the most widely sold tint in the U.S., they are not what you want for sightcasting in shallow water. Being a neutral color, grey provides for nearly natural color perception throughout the light spectrum. In general it will provide the most soothing effect in very bright conditions. In the fishing world the best application for grey lenses would be open water fishing where you aren’t concerned with seeing structure or picking up on fish that are blending in with the bottom. I wear grey when fishing offshore as I’m looking more for the silhouettes of fish.

For inshore sightcasting you want a lens that enhances colors and provides more contrast. All the higher-end brands have such a lens, but they refer to them by different names. Rose, amber, copper and vermillion are but a few. Costa refers to theirs as copper. You can get straight copper or copper with a green mirror. All of these various colored lenses filter varying amounts of different light waves. The increased contrast provided really does improve your perceived visual acuity. They can literally make a redfish seem to pop out from its surroundings.

Nobody can tell you which of these tints will work best for you. Studies indicate that a person’s eye color plays a role in what determines the optimum lens color. Generally speaking people with light blue eyes do better with the darker tints while those with dark brown eyes lean toward the lighter tints. Folks with hazel or green eyes report that there didn’t seem to be much difference.

My advice would be to visit a store that has a good selection and try them side by side to see what works for you. Also, when shopping for glasses, remember that the light intensity inside is considerably different from that found outside. Ask the salesperson if you can step outside and try them out in real world conditions. Look at the trees and grass to see which lens gives you that HDTV feeling.

Another point of debate involves mirrored lenses. Some folks swear by them while others say they make no difference. Testing shows that they do make a slight difference in the amount of light transmission through the lens. In the Costa lineup a straight grey or copper lens allows for 12% light transmission. Adding a mirror finish lowers that number to 10%. If your goal is to eliminate as much light as possible you want to go the mirrored route.

There are times when the traditional lens tints are too much. Early morning, fog or heavy cloud cover can leave you wanting more light than your glasses are allowing. I recently picked up a pair of Costas with their new Sunrise Silver Mirror lens which allows for 30% light transmission. They provide incredible color contrast under less than ideal light conditions. Those early morning crab trap buoys really jump out and I’ve taken to wearing them instead of my copper lenses on overcast days. The added light and color contrast has really helped in spotting fish on those tough days.

No matter which brand you go with, there are a few things you want to make sure they have. Number one would be polarization. Not all sunglasses are polarized, even some of the high-end models. Sunlight is an electromagnetic wave with electric and magnetic vibrations occurring on multiple planes. This is unpolarized light meaning that it is vibrating in all directions. When this unpolarized light strikes a surface such as water, a percentage of those light waves become polarized along a horizontal plane. The angle of the light determines the degree to which the vibrations become polarized.

The result of this is the glare on the water we are fighting to look through. The lower the sun’s angle the greater the amount of glare. Indoor light is generally around 500 lumens. Outside in the shade it is around 1000 lumens. We start to get uncomfortable at around 3500 lumens. Glare starts at around 4000 lumens when the amount of light reaches a level our eyes can no longer absorb. Depending on the angle of the sun this glare can reach upwards of 6000 lumens. Prolonged unprotected exposure to this glare can cause photokeratitis, sunburn of the retina, resulting in temporary or possibly permanent blindness.

Polarized glasses block glare using a layer of vertically oriented long-chain molecules which completely block any light waves that are perpendicular to their alignment. Thus horizontally oriented polarized glare is eliminated. Other non-polarized light waves are allowed to pass through as visible light. Some amount of glare will still get through because the ripples and waves on the water will change the angles slightly.

One way to check whether your glasses are polarized is to hold them out in front of you oriented as if you were wearing them while looking at a strong horizontal glare. The glare should be mostly blocked. Now slowly rotate the glasses to a vertical position.  The view should brighten as you rotate and max out as the glass gets perpendicular to the glare. If there is no change then they aren’t polarized and are doing you no good on the water.

The next thing to confirm when making a purchase would be UV protection. We have all been made aware of the damage ultraviolet radiation does to our skin. I think we all know of a fisherman who has had a few suspicious spots removed or even lost a part of an ear to the dermatologist.

Excessive and prolonged UV-B light entering your eyes has been linked to glaucoma, macular degeneration and cancer. Look for glasses that have coatings to block UV.  They’ll be labeled as blocking “99-100% of UV light” or “UV absorption up to 400nm” which would be equal to 100%. There is also a standard provided by the American National Standards Institute with the designation of ANSI / Z80.3.  However, ANSI is a voluntary organization so it is possible that glasses meet the requirements without having an ANSI label. Do your homework because this part is important to the health of your eyes.

Cheap sunglasses might have made for a cool song, but they have no place in protecting your eyes. Do yourself a favor and buy some quality sunglasses.