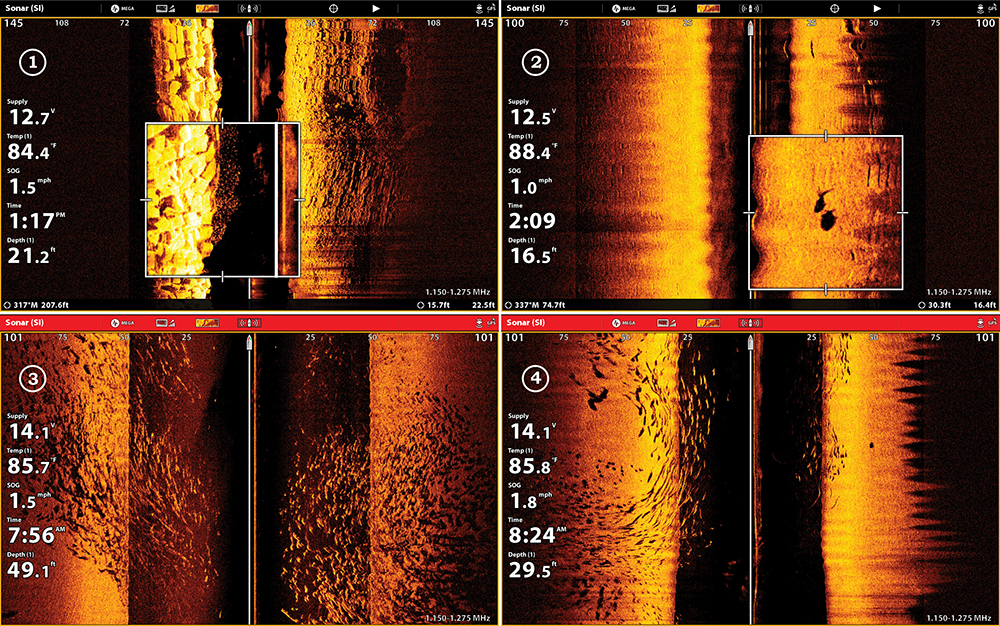 I’ve always been one to resist technology, particularly in the realm of fishing. I’ve run boats for years without GPS, depth finders and fish finders, trolling motors, etc. That changed a couple years ago when I bought a Humminbird Solix for my Dargel Kat. I bought this boat for running jetty and beachfront trips, hunting primarily for bull reds and tarpon. When I added the Humminbird along with a Minn Kota trolling motor my whole game changed.

The side image feature took a couple trips to wrap my brain around what I was seeing on the screen, but once the fog cleared I became addicted. I spent a good bit of time on my days off just cruising up and down the rocks looking at the underwater structure. There are always areas on the jetties that pay off more often than others. I knew there was a reason, I just didn’t know what that reason was. This was like draining all the water and seeing a whole new world.

Most every location I had fished successfully had some irregularity in the structure of these big granite blocks. Sometimes there’s a single rock that tumbled away from the main structure, sometimes it’s a hole or washout, every so often there will be a mini landslide. There were a lot of “ah-ha” moments in those first few trips.

Having a GPS was never a big priority for me as I’d always just navigated the old fashion way, landmarks and triangulation. Running a poling skiff for the majority of the last twenty years never gave me much reason for needing pinpoint locations. And honestly, I still don’t use it all that much. When I do, it is mostly to get back in the general area where I found the tarpon schools the day before. The beachfront is a big place and this speeds up the search and keeps me from straying too far from the most productive areas.

The Minn Kota has probably paid for itself in lost anchors. The Spot-Lock function is a true game changer. As I slowly cruise the rocks and locate something that looks fishy I can simply push a single button and the boat is “anchored” to that spot. I’ve used it in some pretty rough water and extreme tidal flows without issue. It’s also pretty handy when I’m busy trying to land a tarpon. Knowing the boat isn’t going to drift into trouble while my mind is elsewhere is a great relief.

But let’s get back this side image capability. Of all the gadgets I’ve added, this is the most important to the successes on my boat. Tarpon and reds don’t always feed on the surface. It’s cool as hell when they do, but when they don’t it really helps to be able to see below the surface. It’s really exciting to be searching the surface for breaking fish and glance down to see the screen lit up with the telltale signature of fish.

Quite often you can clearly see what kind of fish it is. I’ve had tarpon cruise by where I could see their entire profile including the fins, leaving no doubt what it is. Schools of bull reds and jacks have a similar look and you often don’t know until you can drop a lure into them. Schools of tarpon are pretty easy to identify once you get familiar with what you’re looking for. Many times I’ve been ready to relocate when I happened to run across a deep school and start catching them. There is no doubt this thing has accounted for many fish we wouldn’t have found otherwise.

Just recently there was a big school of bull reds working just inside the jetties. They would surface chasing ribbonfish. Word got out and the weekend crowd descended. As soon as the school would surface every boat in the area would run full throttle into them, often putting the school down before anyone even got a chance to hook up. It was pretty frustrating, but I had a plan. Get near the melee and let the other boats put them down, then use the Humminbird side image to locate the school. Customers simply dropped their jigs down through the school for instant hook-ups. Frustration level dropped and we caught fish while the crowd waited for them to resurface.

But even when I’m not seeing the targeted fish, the side image capability is still working for me. I’ve located small pieces of structure on our otherwise featureless beachfront. During slack tides, when the predators aren’t very active, I go looking for bait balls in areas I know to hold tarpon or bulls. Not every area holds bait every day. Knowing where the bait is narrows the field and lets me know where I should be once the tide gets rolling.

I’m not even scratching the surface of the capabilities of this unit. I’m not patient enough to learn how, so far anyway, but you can use the Humminbird Solix to communicate with the Minn Kota and tell it to take you directly to a specific location. You can also give it a route to follow based on previous tracks or based on a certain depth contour. I say “you can” literally because I probably won’t any time soon.

One of the newest features involves having the Solix communicate with the Talon or Raptor shallow water anchors. I currently run a Power Pole, but I could see switching over to the Raptor. If any of that is of interest to you, go to their website and click on the One-Boat Network.

There is another new technological addition I’m thinking of making. Humminbird has come out with a 360° transducer that offers real time info on what is going on all the way around your boat. That could sure come in handy when that school of tarpon on the surface goes down and you can’t tell if they went left or right. Yeah, I need that.