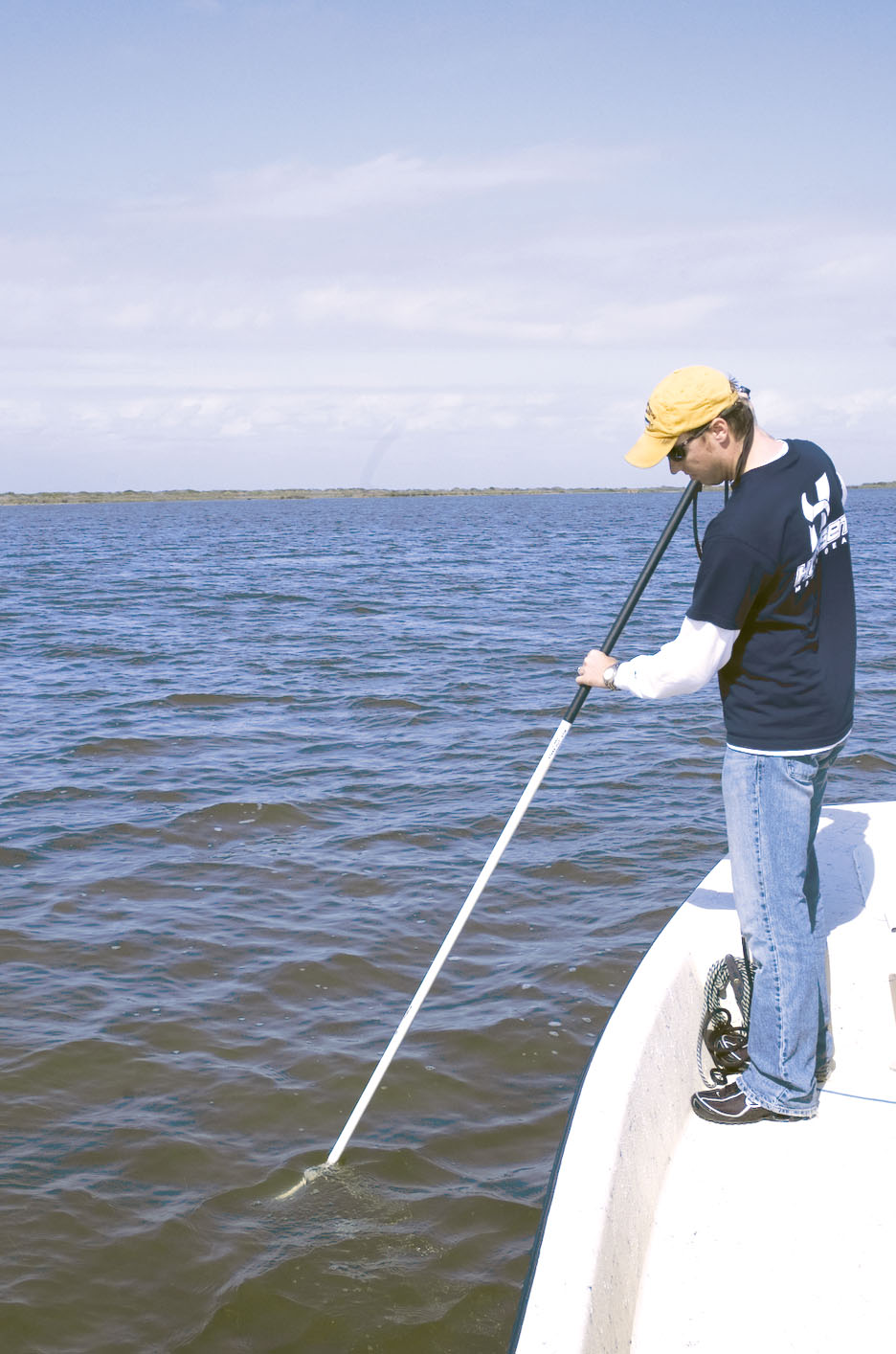 Every once if a while you bump into something that really catches your eye and you just have to have one; sometimes that same product really fits a niche and becomes part of your "stuff." Pam and I decided to pass along some of our recent experiences as a service to readers. There are no claims made here, just honest observations. And yes, these have become part of the "stuff" we take fishing.

Anybody that enjoys drifting flats for trout and reds has suffered at the mercy of the wind. Even with a drift sock, drift speed often prohibits accurate casting and lure presentation, especially when a fish is spotted. And in the case of a school of reds, how many shots do you get if you can't stop? Sure, we have Power Poles on our boats, and after you fish with one it becomes a "must have" for the ease and simplicity of anchoring in shallow water. However, when the Power Pole goes down the boat swings and the bow is the only good spot left for casting. If you fish solo or with only one companion this is not too big a deal. But what about when you have three or four aboard?

Here's another scenario. Let's say you like to fish with live mullet. If you anchor from only one point the boat is free to swing and make a mess of your lines. If you have placed baits in potholes you often find the swing of the boat dragging the baits into grass or oysters where it can hide and tangle.

Enter Stake-out Stik. We made a practice run with three anglers in the boat. The object was to discover whether Stake-out Stik deployed in tandem with our Power Pole would provide all anglers with comfortable fishing space. Drifting on the sock was working all the way across the Matagorda Island lake we were fishing. The wind wasn't too stiff so we maintained a favorable speed. As we approached the shoreline, as often happens, the water was developing some color and bait was active. That last 50 yards before you hit the bank is what I like to call the "strike zone" as this is often where the predators are holding and hammering the bait that has accumulated there.

I hit the switch and stuck the Power Pole while Brian Little, creator of the Stake-out Stik, stabbed for the bottom. Our timing was good and our boat was now lying perfectly parallel to the shoreline we hoped would give up some bites. We fished for 10-minutes and pulled a nice slot red and a fat rat that nearly made the slot. The lake bottom here, I might add, makes for a strenuous wade, not the most inviting option.

Getting away was easy too. Brian pulled the Stake-out Stik and as the Power Pole came to full upright we idled easily away, still in two feet of water. The alternative would likely have included drifting up much shallower and chewing mud and seagrass to get back underway. Stake-out Stik is a good addition to any shallow water fishing boat. Stake-out Stick is available in several lengths and also a version for kayaks. Some more useful info: Stake-out Stik with a 12 foot line held our 25 foot flats boat handily and never slipped in 15 mph wind it really does work! Learn more by visiting www.stakeoutstick.com or at your local tackle dealer.

Anglers who wade are always on the lookout for products to help them land their fish. Some prefer nets for the quick scoop they provide; others prefer to keep their outfit as unencumbered as possible. The K.I.S.S. principle applied to wade fishing gear dictates that only the minimal amount of gear should go into the water. I know anglers who assert that the traditional hand-grab is part of the challenge; somewhere in between lies another type of device to get the job done. Hence the recent popularity of gripping tools.

Berkley has been listening. Their TEC Pistol Trigger Grip hit the market last summer with its first big splash being made at the ICAST Show in Las Vegas where it was voted "Industries Best and Most Innovative" new tool. The minute I got my hands on it I knew I wanted to try one.

The TEC Pistol Trigger Grip is the lightest of the various gripping tools I've tried and the movement of the stainless steel mechanism and jaws is smooth and sure. This tool comes with a holster, but with its light weight and relatively small size I find it easy to carry while snapped to a wade belt, over-the-shoulder tackle pouch or wader strap.

During the several months of use Pam and I have given our new Berkley grippers we have found them to work very well. Many of the fish we have landed and released were never touched. We simply held them in the water and used our pliers to remove lure and then pulled the trigger to let them go. If a fish is to be photographed, it can be lifted quickly with one hand on the grip and the other supporting the belly.

For maintenance, we've been giving the tools a good rinse in freshwater and a quick spray of Reel Lube followed by wiping with a paper towel. Just for grins I performed a "no maintenance" trial of ten wading trips. The gripper held up perfectly, same smooth action, same sure grip on the fish's lip.

The TEC Pistol Trigger Grip makes a great fish-friendly landing tool for boaters too. Whether you wade or stay in the boat, you really should attach a float. I learned this the hard way many years ago anything that can sink will end up on the bottom of the bay if you give it a chance! This tool is available in a variety of sizes to suit the needs of all fishermen, lake, bay and offshore. To learn more go to www.purefishing.com. The TEC Pistol Trigger Grip can be found under new products on the Berkley page.

Take a run to your local tackle shop; the market is brimming with new baits. Lure makers have given us some pretty amazing devices to throw at fish and one thing is certain, they'll all catch a fisherman! As a confessed lure fanatic I buy and try most everything I can get my hands on. And while it is true that I love to fish with new products, it does not prohibit me from having a list of oldies, goodies and favorites.

One of my recent and notable lure trials included a session dedicated to Fishbelly's new Tri-fin Kick Shad. As soon as you see this bait you can't help but wonder how Fishbelly's designers ever came up with the idea of stacking three paddles on one lure, but it works.

I don't know whether it might be the vibration this lure gives off as the water rushes over the stacked paddles or maybe it's just the considerable tail wagging you get from it, I'm not a fish. The proof of any lure is what fish have to say about it and the trout and reds in Shoalwater Bay and Pringle Lake seemed to like this one.

It was early morning, late December. The air temp was 40-degrees and the water was 52-degrees. The water was murky, still clearing from the effects of a flag-shredding norther. As could be expected the fish were snuggled down in soft mud under four feet of water. The best action was found amid scattered oyster and what was left of last summer's widgeon grass. The bait had to be presented slow enough to dangle in their face, yet fast enough to avoid hanging up on shell and grass.

The conditions and requirements proved to play right into the Kick Shad's strong suit lots of wiggle from tiny hops and slow lure speed. We had them rigged on wide-gap 4/0, 1/16 oz screw-type leadhead jigs. The bait itself is very soft and supple but held up through several bites and fights before getting chewed beyond being functional.

Now one successful trip does not necessarily earn any bait a seat in my carry box, but the Tri-fin Kick Shad did well enough to warrant further study. We've got big schools of late-winter reds beginning to patrol the shorelines of San Antonio Bay and I'm anxious to give them a look at this bait as well as some of the other new stuff that has been showing up. Keep an eye on future lure trials as we'll be reporting further on what the fish have to say about the new baits of 2008.

The Tri-fin Kick Shad is available in 5" and 6" sizes and an array of fishy colors. To learn more about this and other Fishbelly offerings, go to www.fishbelly.com.

Roy Sanders has hit upon an idea whose time has truly come. Fishing the flats can be done many ways, and as can be attested by the impressive number of Micro Flats Skiffs he sold at the Houston Boat Show, his creation is gaining a wide following.

In order to understand why this is happening, you have to first understand that flats fishing is a lot like hunting; the excitement factor increases exponentially the closer you get to your quarry. You've probably heard somebody describe the kick they got from archery hunting after years of hunting with a rifle. Redfish are just like trophy whitetails in this regard and Roy's boat provides an excellent platform for getting you there.

Stealthy approaches without having to wade boot sucking muck is one the aspects that has drawn so many to take up kayak fishing. Anglers are learning the thrill of stalking their fish without suffering a heart attack or pulled groin muscles. And kayaks are fine, I own three. Trouble is, you have to be a ballerina or at least a decent gymnast to stand up and fish from one. Given that most of us are better equipped to imitate wounded buffalo, our butts belong in the seat, relegated to sighting only the fish that tail or wake for us.

It's different with the Flatstalker, I haven't met anybody yet that could stand on one. Fishing from it is a dream come true for those who live to sight-fish. Once you get the hang of it, you can climb atop the combination battery box-ice chest-tackle storage-console that comes standard. The addition of the optional transom bracket and electric trolling motor just seems a no-brainer to me. Who wants to paddle or pole when you can glide effortlessly down a shoreline?

Roy is an all-around outdoorsman and the way he equips his boats shows it. He has models for fishing, waterfowl hunting, and even floundering. The hunting boats are great for transporting a dog, decoys, and all your gear to a back bay or cove where the ducks love to roost and feed. The flounder boat comes equipped with enough lights to make a Ferris Wheel jealous and you can slip along in mere inches to get a crack at the shallow ones other rigs can't reach.

Check out all the boats, options, and the dealer listing at www.flatstalker.com or give Roy a call at 361-857-7074. Tell him you learned about his boats in Texas Saltwater Fishing Magazine.