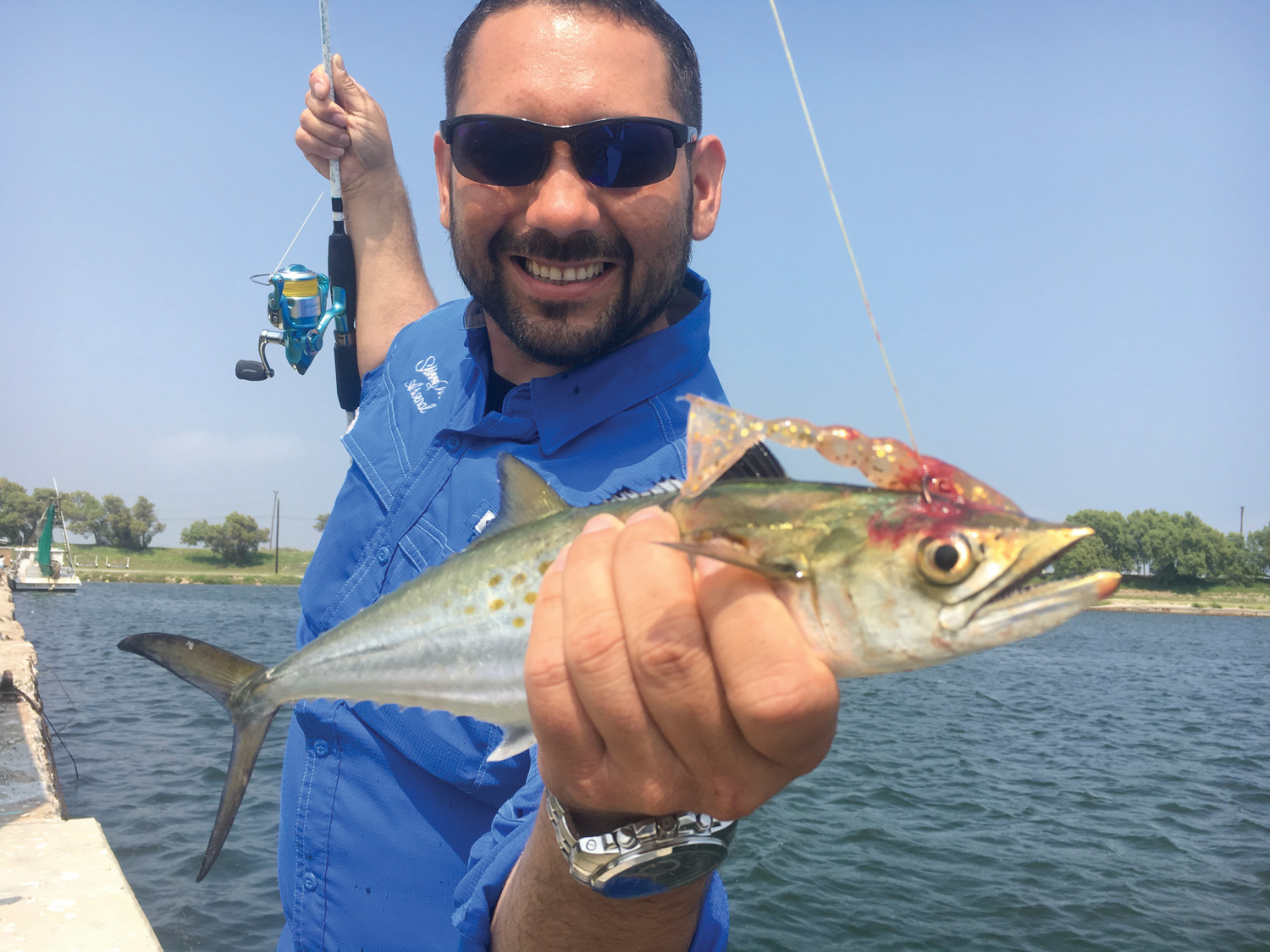 Yep, that was about it. I spend nearly every day outdoors and had very few occasions to wear anything heavier than a sweatshirt. Water temperatures hit that magical 70⁰ mark earlier than I can ever recall and never looked back.

I’m not sure what all of this means for fishing throughout the coming year, but it has been a really good spring, so far. One thing I’m pretty confident in predicting is thick seagrass. I’m already seeing a lot more grass than normal and figure some back lake areas will be headed towards unfishable matted-up conditions well ahead of schedule. Even if you don’t hit those grassy lakes, you’ll likely be dealing with that annoying floating grass in the afternoons a little sooner than normal.

Given all of that, it might be a good idea to step up your weedless game. Over the years I’ve tried every trick in the book to modify my lures, but nothing really worked all that well. Recently I ran into Henry Stokes of Skinny Water Arsenal in his booth at Rock the Dock boat show in Aransas Pass. We got to talking about his lures and how they came about. I thought it was a pretty cool story that falls right in line with the history of other Texas handmade lures.

It all started when Henry found himself dealing with a grassy problem during a tournament several years ago. He was looking at a pod of upper-slot reds tailing in inches of water surrounded by thick grass. “I just knew the red I needed was in that school, but I flat out couldn’t get a lure in there without spooking them by fouling in the grass.” He spooked those fish along with several others that day and it lit a fire.

Henry decided he was going to come up with some sort of lure that would work. He shared his thoughts with his fishing buddy, Capt. Dean Thomas of Slowride Guide Service. I’ve known Dean a long time and he isn’t one to mince words, so it was no surprise when he told Henry to save his time and money because it can’t be done. Dean continued with, “Don’t you think out of all the thousands of lures out there somebody hasn’t tried the same thing you’re thinking about?There are lots of people who sit around at those companies every day thinking about new lures.What makes you think you can pull it off in your spare time?”

Well, that did it. Henry was more determined than ever. He knew he wanted a durable soft plastic with a slow sink rate and a good hook-up ratio – that was totally weedless. One little problem, he knew nothing about making a soft plastic lure. “Hell, I didn’t even know what kind of plastic they used. Not to mention how to make a mold or correctly pour it.” Through several months of studying, asking questions and tinkering he eventually got all of that figured out. Now the really hard part – designing a lure.

Henry spent every evening after work carving resin blocks into lure blanks. “Man, I can’t tell you how many hours I spent sitting in my spare bedroom at a TV table with a Dremel Tool and sandpaper.”

He made dozens of blanks, turned those into silicone molds, and poured some lures. “I’d take them down to Aransas Pass and show them to Dean and he’d go through the pile saying, “Nope, nope, nope.” We threw some of them and, he was right. Henry credits Dean with pushing him by being his harshest critic. Dean didn’t hesitate to point any and all flaws.

After several months, he sent a package of lures to Dean and asked him to take a look. Dean decided these were worth throwing and agreed to give them a shot. Henry was at work when he got a text with a photo showing his lures tied on every one of Dean’s customer rods and the message, “We’re killing it.” He had the action right, but still wasn’t quite satisfied with the way the hook went through the lure.

The lure is designed with a slotted hole on the tail that allows the hook point to ride in a small depression on the top, but allows it to slide upward freely for a solid hook-up. That hole looks pretty simple, but I bet we went through another 20-25 molds trying to get it perfect.”

Dean wandered up and threw in, “Yeah that was a pain in the butt, but he finally got it figured out. And it really is perfect.” High praise from Mr. Negativity.

The new lure was christened The Stoker Rat Tail. It is a mullet or small baitfish imitation.Taking what he had learned throughout this design process, Henry was able to come up with the weedless Stoker Shrimp Tail a few months later. Both are available in unweighted or 1/8-ounce version with all the standard Texas coastal colors.

Henry recently graduated from working out of his garage to a small shop in San Antonio where each lure is assembled and poured by hand. A specially bent 600# stainless wire runs from the nose tie to a stainless split ring with a hand-bent wide gap hook. He also adds a dehydrated concoction of shrimp, menhaden and mullet to his plastic. And yes, he makes that himself as well, using fresh-caught bait he buys in Aransas Pass. As a side note, if he ever offers to blend up some margaritas you might want to decline.

I have yet to personally throw them into a thick mess of grass, but Dean fishes some of the grassiest water on our coast and if he’s says they’re weedless I’ll go with that. I did get to play around with them a bit to see the action and I really liked what I saw. Both versions settle upright at a steady, slow pace. The Rat Tail has a nice “dying baitfish” wobble to it. Next trip out I’ll have them tied on for some serious testing in the nasty stuff.

If you’d like to get your hands on some of Henry’s products, you can pick them up at Slowride’s shop in Aransas Pass or online at www.skinnywaterarsenal.com.