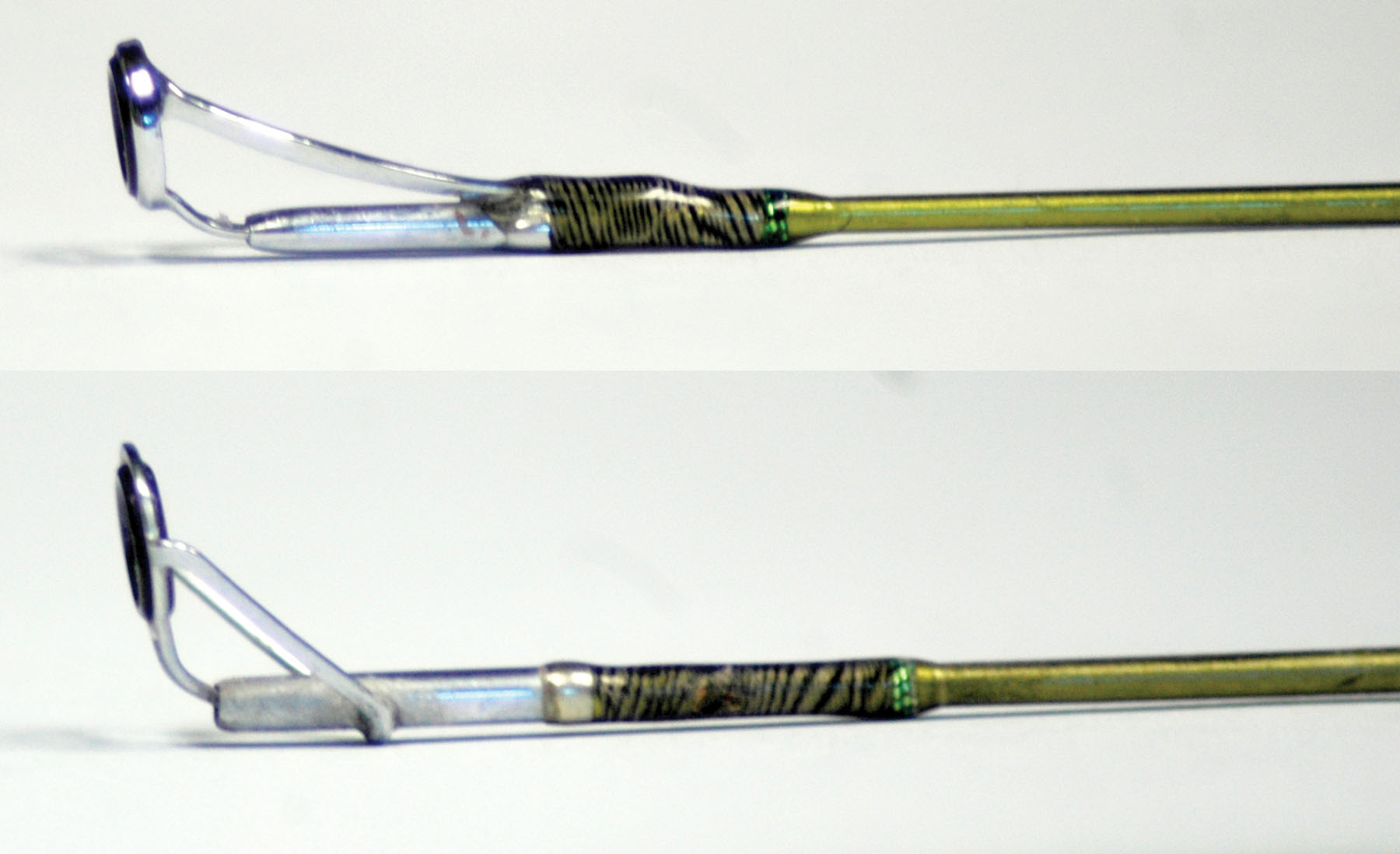 New rod on top.
Ask any lure angler what they hate most about braided super-lines and you are likely to get an earful about those pesky "tip wraps." Tip wraps, as most folks refer to them, would be those nasty little knots of braided line that somehow affix themselves around the tip of your rod when you get aggressive with the rod tip action while working a lure.

These tangles occur most frequently whenever you are popping a jig or walking a surface plug while facing either directly or slightly into the wind. A tiny "bubble" of slack is driven behind the rod tip by a puff of wind and once there miraculously cinches itself into a knot as slack is reeled up. Sometimes, when detected in the early stages, a deft flick of the rod tip will clear the offending wraps; others require finger work. The worst will send you wading toward a buddy to hold your rod while you mutter words you'd never want your mother to hear as you pick at the mess.

Well, for every fishing problem, some canny fisherman eventually invents a fix. Enter Joe Meyer of Fishing Tackle Unlimited. Joe is a diehard wade fisherman and topwater chunker in addition to be being the chief design talent behind the FTU Green Rod. Joe got fed up with tip wraps and decided there just had to be a better way.

Working closely with his rod manufacturer, Joe led a search of the industry to find a rod tip guide that would encourage the offending wraps of braid to unfurl harmlessly rather than tangle. After several trials, the search ended in a discovery that will bring a smile to the face of braided super-line lovers.

The FTU Green Rod, both REC and Fuji Concept Alconite guide models, are now equipped with the Fuji Concept CMNAT rod tip. You will note in the accompanying photos how the brace angles have been eased and also how the wrappings and cement extend over the brace bases. The combination of the assembly technique and the components themselves make a smooth packagesmooth enough that the "tip wrap" we have learned to hate has all but disappeared for anglers wielding the latest version of Joe's All-Pro Green Rod.

Though a Fuji component, the CMNAT rod tip is available only as original equipment on the FTU Green Rod here in the U.S. market. If you have had it up to here (fingers across throat gesture) with your beloved braid tangling around your rod tip, stop by FTU and check out the new Green Rods. I have been using one for several months and cannot remember the last time I had a nasty tangle. Tell the sales team you read about it in TSFMag!