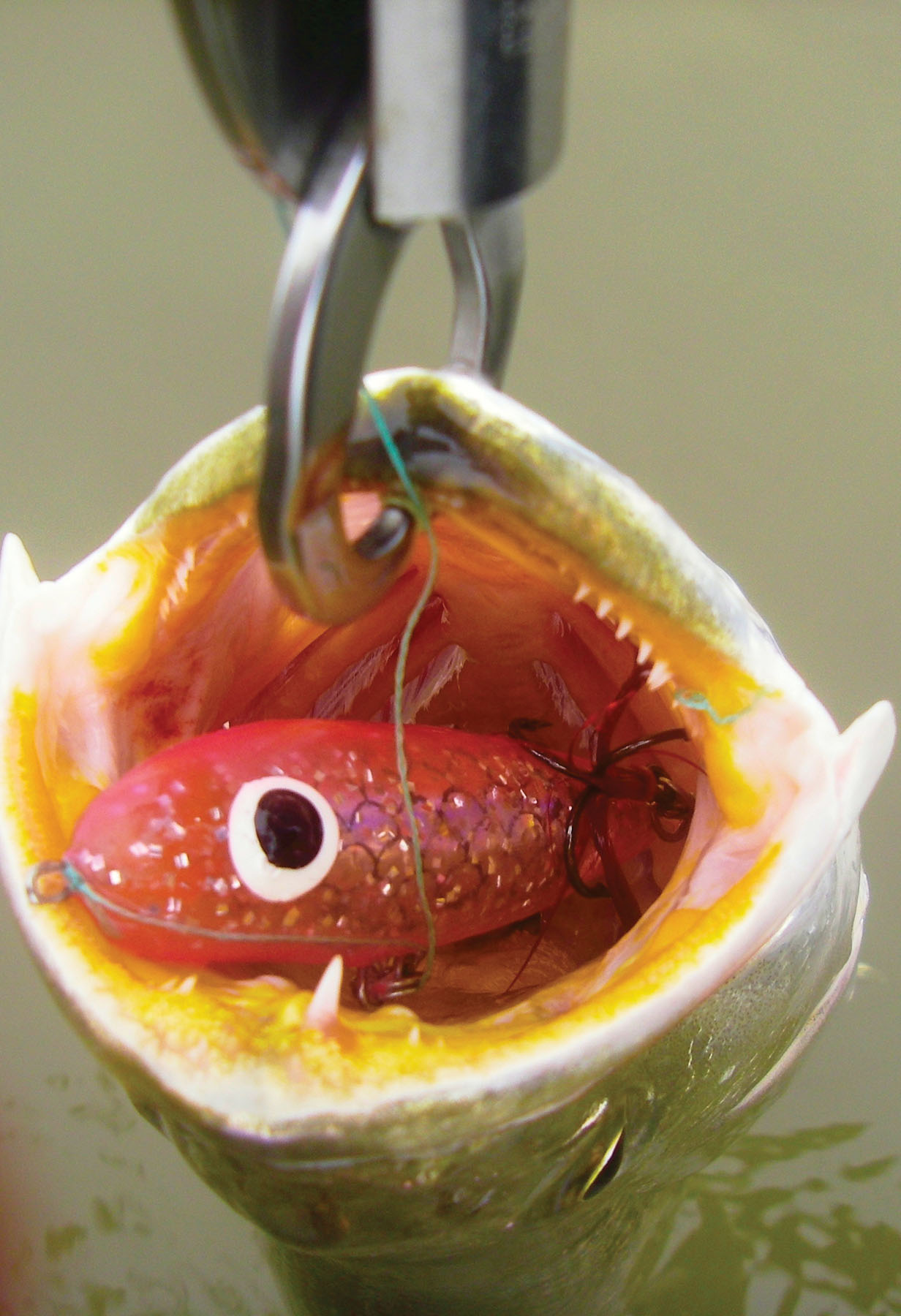 The new junior-sized corky is already gaining fame as a producer.

Picture yourself as a mature speckled trout resting in the shallows of a remote East Matagorda Bay mud flat. At last, a meager amount of light penetrates the winter clouds and warms the mud, energizing your lethargic attitude. Your stomach grumbles as the remains of the foot-long mullet you consumed days ago reaches the final stage of digestion. It's time to eat.

All ten pounds of you cruises along the now temperate flat soon reaching a patch of oyster shell. Approaching a familiar feeding ground sparks memories from seasons ago. Memories of gorging yourself with jumbo-sized shrimp and feasting over endless schools of finger mullet come to mind and fuel your hunger.

You lay motionless where the black mud's edge meets oyster; the tide begins to pull water your way. An appetizing mullet approaches; alarming you of a potential feast.

Immediately, you propel at full speed and attack; exploding the water's surface. The six-inch mullet is devoured instantly and lays to rest in the yellow interior of your mouth. You slowly sink back to the warmth of the mud bottom.

Soon after, a wobbling, wounded-looking mullet pierces the water's surface, several feet away. Vibrant in color, the four inch baitfish gently dances, flaunting its dazzling body as it sinks leisurely through the water column.

Your spotted body jumps back into attack mode and seals the wounded mullet's fate. Only this time the mullet fights back.

A fierce headshake hurls the previously consumed 6-inch mullet from your jaws; but the invisible, pulling force never ceases. You succumb to the grip of a Boga at your lip.

"10 pounds!" is yelled by a man bundled beneath layers of outerwear.

Two other men surround your beastly profile and cameras flash.

Before you know it, you're back in the water; water is flushed through your gills. Exhausted from the escapade, you finally muster enough strength to break free from the angler's light hold.

"Courtesy of a Corky Fat Boy!" is faintly heard as you dash back to the warming protection of your feeding ground.

If only you knew, you just made someone's dream come true.

Like an epidemic spreading across the gulf coast, trophy trout fishermen turn in record numbers every year to an arsenal of Corky Fat Boys, Devils, and Originals when hunting for the trout of their lifetime. Perhaps James Wallace's state record trout, caught on an original Corky in 1996 is to blame. Packing the dance steps of a topwater and the wobble of a brokenback, the tempting slow-retrieved Corky is just plain ol' effective for trophy specks.

"It got crazy when Wallace caught that fish," states Paul Brown. "Anglers poured into our shop and literally bought every single Corky off the shelf; even after 13 years, this craze hasn't slowed."

Captain Mike McBride knows a thing or two about fishing the Corky. Unlike most, he says he catches most of his fish by working the heck out of it.

"Corky baits are worked differently across the coast, but I almost try to pop the knot off while trying to keep up with the slack. The whole attraction of an original Corky boils down to making erratic movements and irresistible pauses," states McBride.

Captain Jesse Arsola, trophy trout guide of Matagorda, swears that there is a science to working Corky lures. "When trout are feeding aggressively they will nail anything; the trick comes when you have to work for them to bite that's when technique really comes into play."

Arsola went further, "I use this counting system nearly every time I work a Corky. Count how long it takes for the Corky to reach the bottom. Vary how many seconds you let the Corky fall before popping the slack out of the line. Figure out which count you are catching your fish on. This gives major insight in knowing which part of the water column the trout are feeding in best."

Captain John Havens, tournament angler and guide, relies on a chartreuse backed, white bellied, gold-sided Corky Devil; which also happens to be one of my personal favorites as well. A pearl and chartreuse-backed Fat Boy along with a couple pinks is how Havens hooks into the trophy specks that we all desire.

"Make sure to stay in contact with the lure at all times to feel the most subtle of bites."

When working a Corky Devil, Havens starts his retrieves with a lift of the rod and a couple of twitches before allowing the lure to fall. He then repeats the process varying the time the lure is allowed to sink.

Captain Havens prefers to use clips on his slow sinkers. He is fond of Paul Brown's clips.

"The clips make it easy to change lures and I have found that it does not change the action of the lure at all. If it does alter the action I have not seen it in the number of hits I receive."

Personally, when I fish with the Corky baits, I vary my retrieve speed as often as every five to ten casts. Last January, I was shown how important working a Corky in a particular fashion can be. My buddy stood next to me using a series of three sharp jerks before letting it descend for a few seconds. I witnessed the landing of a nine pounder as well as a five pounder using the same Corky before I switched my retrieve and landed a seven pounder of my own.

Fishing the Corky in deep water is another option many are learning all along the coast. Weighting them with small finish nails in the nose allows them to drop down the water column at a faster rate. I found this very effective in the Colorado River this winter. Customizations, color choices, and varied retrieves are notably how many anglers dupe big trout consistently.

Paul Brown is still at work designing new Corky baits and working to improve the proven designs with new colors and rattles. After speaking with Mr. Brown and his grandson, Jason Brown; B&L Corky fans should be all grins with the expanse of prototypes that are in the works within the walls of their family-owned shop.

A quick morning trip in East Matagorda Bay last December proved to me that the new prototypes are going to be producers. Using what has been dubbed the Corky Junior, I found it very effective when the fish have an appetite for a smaller meal or have a tendency to short-strike; so have some others that have gotten their hands on the newest of slow sinkers.

Jason Brown continues to create successful batches of lures since the introduction of the Devil Eye soft plastics. Rigged with eyes, this familiar "Devil" body shape continues to attract attacks from speckled trout and redfish. Jason also has a new lure up his sleeves. Its prototype name is "Solo" and it incorporates the fish attracting features of a split-tail and a Devil. It can be rigged weedless and will sink faster than the Fat Boy and Corky Devil styles. Trophy trout buffs have a lot to look forward to this spring.

Next time you let your imagination run and you dream you are a 10 pound trout, stay away from that slow-sinking piece of dynamite they call Corky.

To learn more about the Corky family of lures and Brown Lure Company's Devil Eye baits; go to www.CorkyBandL.com and www.BrownLures.com.