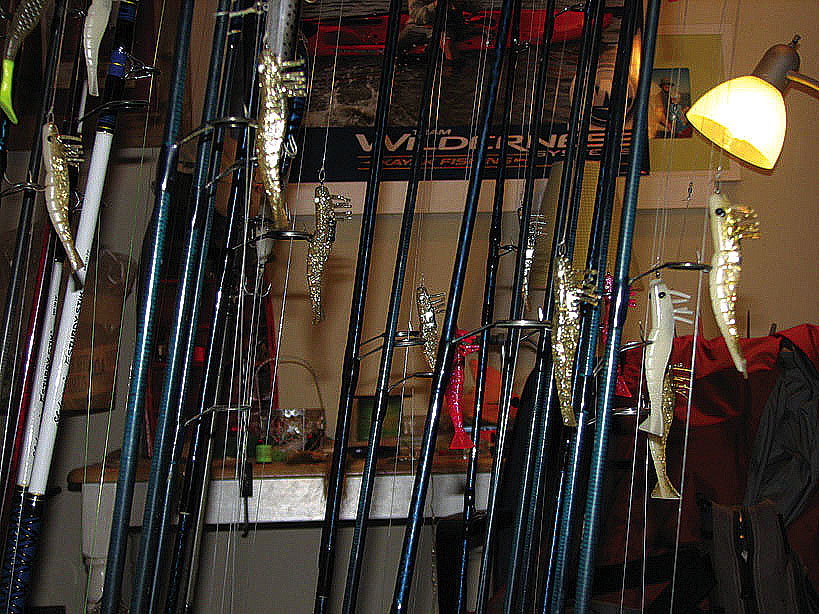 Capt. Dean Thomas makes a living chasing shallow water reds…we call him, “Mr. DOA.”
Like everyone reading this magazine, I get a kick out of fishing. Hitting the water as the sun turns the horizon orange and feeling that rush of anticipation as you launch never gets old no matter what the targeted species. But for me, the anticipation and excitement of heading out to target ultra-shallow reds ratchets those feelings up a couple notches. Searching out tailing redfish, or better yet those that are crawling with their backs exposed holds a special appeal. I liken it to stalking deer with a bow. Everything from the conditions to the approach and ultimately the single accurate cast must be perfectly executed in order to connect. I dig the challenge.

Over the years I've experimented and searched for the perfect lure for those situations and best I've found is the DOA shrimp. Take a peek into my shallow water tackle box and you'll find a variety of lures including paddle tails rigged weedless and small topwaters rigged with single hooks. But what you'll likely take note of is the over-abundance of DOA shrimps, most will be clear with gold flakes. While any lure in the box will work at times, the quarter ounce DOA is my can't-miss favorite for those super spooky reds in tough conditions.

What do I consider tough conditions? Any time reds are in less than a foot of water and the wind is less than five mph ranks near the top. Clear water, high sun and thick grass can all add to the level of difficulty. These situations are where the DOA gets the nod.

Even though reds are the ultimate predators in such skinny water, they are also exposed to dangers not present in the deeper areas of the bay. I've seen everything from coyotes to osprey try to take advantage of these vulnerable fish. No matter how happy and carefree those reds appear as they grub along for their next meal, you can bet they are on alert for the slightest hint of danger.

The first piece to putting this puzzle together is the approach. It has to be as quiet and unobtrusive as possible. While I've accomplished the task many times using a poling skiff, I've had my best luck either wading or using a kayak. Bottom conditions tend to dictate which one I employ. On hard sand, a slow crouching stalk will get the job done. A mud hole requires a kayak or poling skiff, as there's simply no way to consistently wade quietly enough to get within an easy cast.

And getting close enough for that easy cast is critical because you often won't get a second chance. I wish I had a dollar for every redfish I've turned inside-out with a cast that was just inches off target. The situation dictates the cast. Do it often enough and you'll start to get a feel for what will work and what won't. For slowly cruising fish on open bottoms I'll usually just cast a couple feet ahead of them and let the DOA settle to the bottom. When the fish gets within a foot or so of the lure I'll give it a little jump. Nine times out of ten that'll seal the deal. Occasionally those cruisers will change course or simply ignore the lure as they swim on by. It's now time for a more aggressive shot. Let the fish get clear of the lure and burn it back. The next cast will land as softly as possible within inches of the red and just slightly off to the side. That'll either spook the fish into the next county or draw an immediate and violent reaction strike.

Schools of tailing fish can be stupidly easy or the most frustrating thing in all of fishing. Experience has taught me that there's no way to know what result to expect. Again, my initial cast will be placed just ahead of the school and allowed to settle to the bottom with a twitch or two as the school gets on top of it. Most of the time there will be several fish competing for the fake morsel. Other times it's as if there is just too much going on for them to even notice. If the subtle approach doesn't pay off after a few tries I'll just drop the DOA shrimp right on top of their heads. It's a gamble that will get a thump or blow the school apart like a busted covey of quail.

My absolute favorite set-up is one to three reds busily grubbing bottom. It is as close to a sure thing as there is in sight-casting. If you can quietly drop that DOA a few inches in front of their nose, well, just hang on. In those moments I can already smell the grilled redfish cooking before I let loose the cast.

All of these situations have one thing in common, the DOA shrimp. Other than fly fishing, I haven't found another lure that can accomplish the objective any better. It lands quietly with a more natural splash than a lure weighted with lead. The DOA then settles softly on the bottom in a hook-up position, quite handy when casting into grass or shell. In fact in really thick grass the shrimp will often sit on or near the top of the grass where a lure on a lead head jig will invariable foul. And then there's the action, or truthfully the lack of action. If you've ever watched shrimp swimming around in a bait tank you'll see that they tend to just swim along slow and steady. The DOA shrimp imitates this perfectly by just slowly lifting the rod tip. When spooked they scoot quickly towards the surface and then settle back towards the bottom. A quick flip of the rod tip and then a dead drop will look perfectly natural and often get the attention of a redfish.

If you haven't given this kind of fishing a shot, you're missing out on some serious fun and an awesome adrenalin dump. Get yourself a cache of DOA's and start stalking the shallowest shorelines and back lakes. You won't be disappointed.