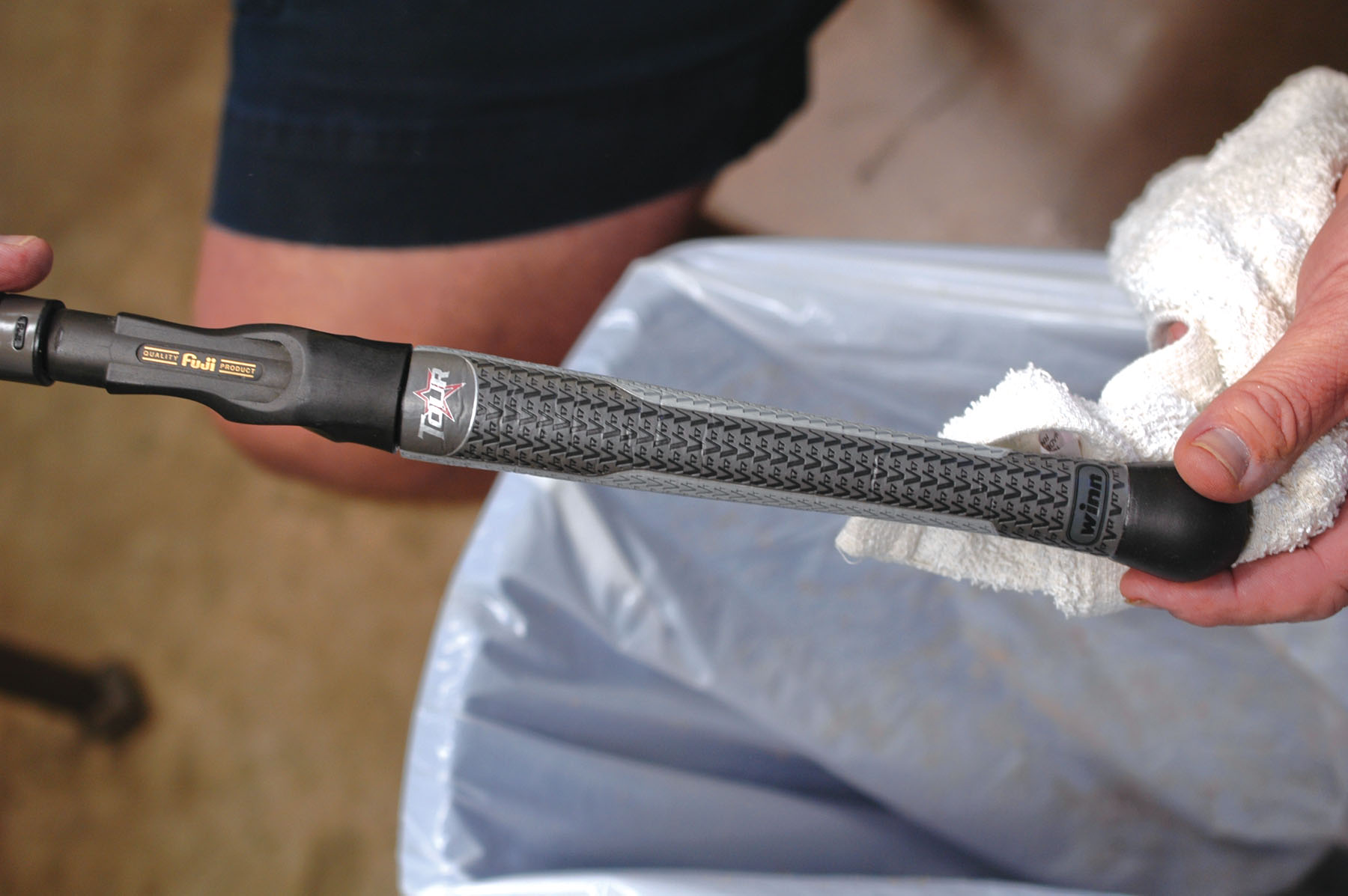 Sliding the grip in place. Photo by Pam Johnson.
Today's younger generation of anglers have no clue how fortunate they are. As a youngster I fished with my granddad's hand-me-downs; direct drive knuckle-buster reels filled with Dacron line and rods made with steel blanks. My first good casting outfit, purchased when $3.00 was a decent hourly wage, was much better but probably still weighed close to two pounds. A two-handed cast would launch a heavy spoon nearly out of sight but an all-day session was torture. The rigs I currently fish are sensitive beyond belief and so light that some actually float!

So if it took homo sapiens several thousand years to finally devise a primitive rod and reel system for fishing, how was this present evolution in modern tackle accomplished in such a relatively short time?

Innovation and adaptation! Incredible advances in materials science and manufacturing technology developed for a host of industries has been adapted and applied to fishing tackle.

Brett Crawford is one such innovator. If the name doesn't ring a bell, Brett was the owner of All-Star Graphite Rods when the company was based here in Texas. Early on, All-Star earned acclaim for quality and function, building custom rods on Gary Loomis' blanks. A critical growth step was taken when Brett's desire to take the brand further culminated in the development of in-house rod blank construction. Brett brought in Don Mook to assist and jointly they created All-Star's successful rod blank tapers, actions and rod styles. All-Star really hit the big time, capturing freshwater and saltwater limelight, with start-to-finish production of premium custom fishing rods in their northwest Houston factory.

Now wind the clock forward. In 2004 All-Star was acquired by the group that eventually formed tackle conglomerate - Pure Fishing. Brett sat on the sidelines for a while but love of the fishing tackle industry lured him back to create Tour Star Products.

Launching a new rod company in today's competitive tackle industry is no mean feat. However, armed with a vast knowledge of fishing rod manufacture and an entrepreneur at heart, Brett was hardly your average beginner. Being an angler that understands rod manufacture from top to bottom and also how tackle is used in the real world sealed the deal. Brett is also proud to offer products made in USA Booyah!

Tour Star's Intimidator Inshore saltwater lineup currently includes 36 flavors in lengths of 6'-6", 6'9" and 7' available in medium-light to medium action, casting and spinning style. Also available are reel handles that provide ability to telescope rod length from 6'-6" to 7' for more specialized application using just one rod. All are equipped with Tour Star's premium non-slip grips, a boon to wade fishermen especially.

The Tour Star Rod Grip is a story in itself, an idea that stretches back about ten years, born of cork handle warranty claims.

Developed originally for the golfing industry, Winn Incorporated developed successive generations of "tacky to the feel" grips that are very easy to replace and not only feature a fantastic gripping surface, but also cushion the shock of club to ball contact and those inescapable dips into turf.

As designed for golf clubs, the WinnLite V-17 grip uses a rubber core but rubber was too heavy to compliment a super-light rod blank, so Brett introduced the idea of an EVA foam core. EVA is widely used by itself as rod handle material but lacks in UV resistance; however, Brett says it makes a wonderful cushiony core for a rod handle when molded with an outer layer of Winn's V-17. The marriage is a revolution in rod grip design and a notable tackle innovation. Tacky to the feel when wet, even coated with fish slime, all while cushioning the shock of casting strokes that create arm, hand and wrist fatigue during a long day of plugging!

Tour Star Grips are also available separately in varying lengths to fit most existing rod styles and brands, and replacement/installation is actually easier than you'd think with a Dremel Tool, slip-joint pliers, knife and proper adhesives.

Back to the rods, true made-to-spec customs, standard features include PAC Bay reel seats and stainless steel titanium-coated guides with no inner ring to fail during prolonged hard use. Traditional full length handles as well as the newer split-grip designs are also available. Check them out at your local tackle shop or on-line at www.TOURSTARPRODUCTS.com.