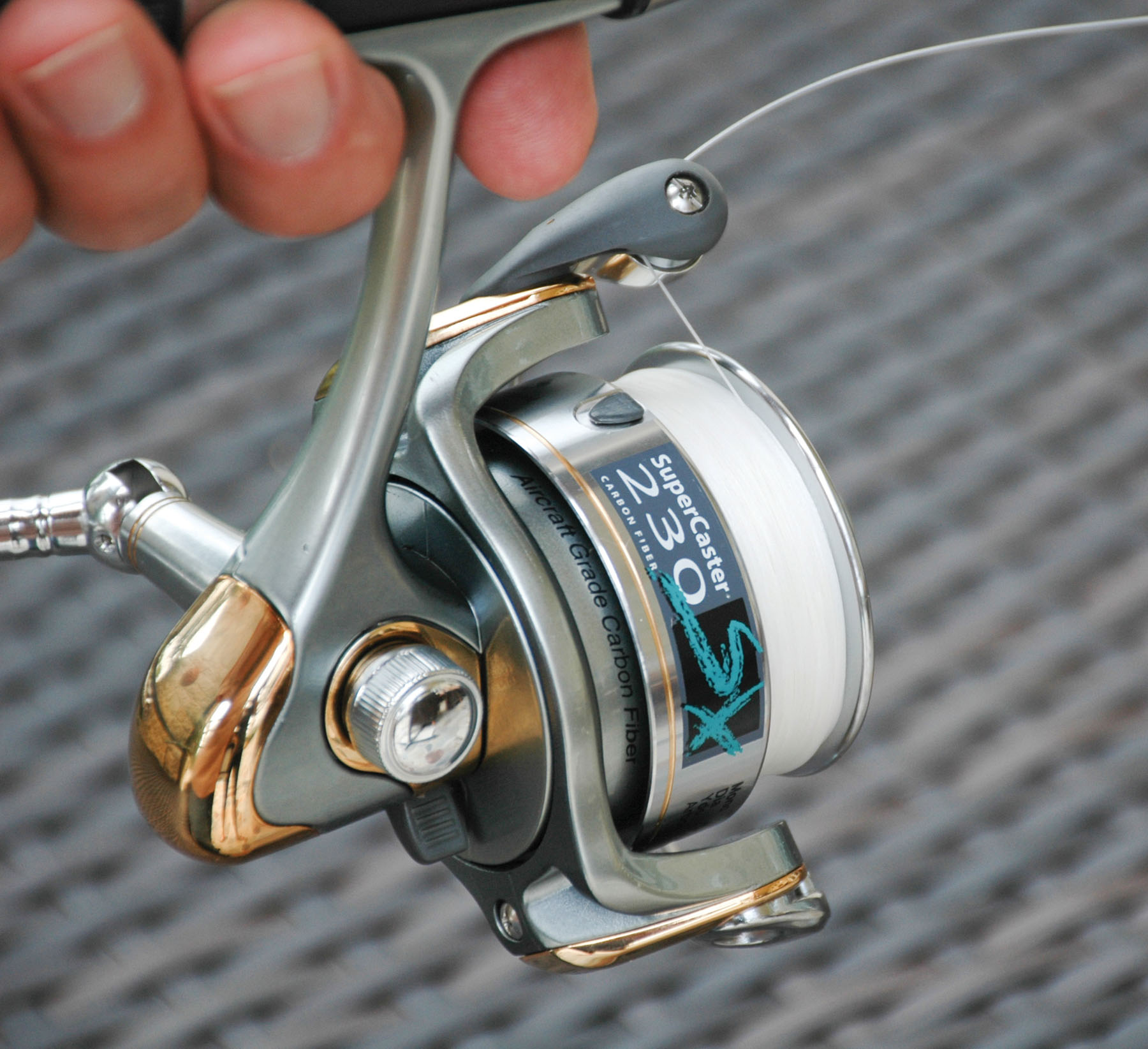 Most manufacturers say to fill the spool to within 1/8-inch of the forward lip. The author agrees when using mono; a 1/16 will work with most braids. Photo by Pam Johnson.
So spinning reels have been around a long time. The earliest concepts of a device with a stationary arbor running parallel with the axis of the fishing rod, capable of winding and stowing fishing line, date as far back as the nineteenth century. Probably the first and best example of a modern open-faced spinner would be the legendary Mitchell 300 manufactured in France and introduced to the US market in 1948.

Spinning reels exploded into the era of clunky, direct-drive baitcasters and found immediate acceptance by anglers of many persuasions and skill levels. The primary attribute was the sudden ability to lob flies, lures and other terminal rigs unheard of distances–no educated thumb required, no pesky backlashes. With but a few hours practice lures and baits as tiny as one-eighth ounce could be launched with ease and accuracy. Another obvious advantage, also part of the design intent, the reel is mounted under the rod so that gravity negates the need to grip the rod to keep the reel positioned correctly, and casts (for right-handers) are made with the stronger and more dexterous right hand while the left is free to begin winding line. Lefties simply swap the handle to the opposite side.

Life is good until a few hundred casts and retrieves produce a fishing line so twisted that snarls and "spring" knots render it all but useless. Why is that?

The plain and unavoidable truth is that any device which wraps line around a stationary arbor induces one coil of twist per each wrap of line collected. A very common example can be seen by coiling a long electrical extension cord around the web of your thumb and forefinger and your elbow. Somewhere around the two-thirds point of rolling up a hundred-footer–it'll all become clear.

Does this mean we should avoid spinning reels like a plague?

Absolutely not! Modern spinning reels are still the boon to anglers they were originally designed to be; we just have to learn to manage line twist.

Stiffer nylon monofilament lines are probably the worst as monofilament possesses a high degree of memory. When it becomes kinked or twisted it naturally wants to stay that way. Many fishing line manufacturers have refined their products over the years to offer softer and limper lines to combat the memory tendency but it cannot be erased completely. Braided micro-fiber fishing line has greatly reduced memory tendency but, again, when it becomes all twisted up it behaves very similarly to monofilament during casting and line retrieval.

It goes like this. You fire a vigorous cast to reach a distance target and as line runs out of the reel you notice a "swashing" noise, different from the usual hiss. What just happened was the line, full of twist, became bunched in front of the first guide and slowed to the point that the coils of line feeding through the guide became loose and disorganized. Being full of twist, the otherwise free-running coils decided to snarl around each other. The nasty, snarled ball may straighten to the point of flowing through the remaining rod guides but probably does not completely unravel. Somewhere down the line is a train wreck trying to happen.

Another common scenario develops when twisted line is retrieved. Let's say you are walking the dog with a surface plug or maybe popping a cork; live shrimp or Mansfield Mauler type. Popping the rod to walk the plug or create chugging and clicking with the cork almost invariably creates momentary slack in the line which, if twisted, will perform the same pesky snarling trick.

If you haven't pulled the knotted section too tightly, the snarled coils may untangle fairly easily. But if you get a bite and set the hook you can pretty much forget about it, especially with braided line. So what can you do about it?

Start from the beginning; there is a right way and a wrong way to load new line onto the spool of a spinning reel. All too often new line is twisted badly during installation and everything goes quickly downhill from there.

Best method for installing new line is using a line-winding device that places the axis of the reel spool parallel to that of the bulk or package spool. Line transfers directly with no coiling between spools. Most manufacturers advise filling reel spools to within about 1/8-inch of the spool's lip but you can get away with 1/16, no more. Overfilling encourages stiff or twisted line to "spring" from the spool and you will not like what happens next.

No matter the method, winding machine or simply cranking from a filler spool, it is highly advisable to hold tension on the line as it is cranked into the reel. I wear a glove and pinch it between my thumb and forefinger. Some will say you need to "pack" braided line very tightly into the reel. I do not completely agree with this as not all line retrieves during fishing include "re-packing."

Fishing with lures requires many casts and, with each crank of the reel inducing twist, there are some things we can do to prevent line twist from accumulating and shutting down our fishing. Listed below are some of my tricks learned in the fishing school of hard knocks.

-Soft plastics must be rigged onto the jighead perfectly straight to eliminate twirling through the water like a propeller as twirling baits twist the hell out of fishing line. Paddle-tails have less tendency to twirl than straight-tail baits.

-Placing a split ring and barrel swivel on your jigheads and also spoons to be used with spinning rigs does two things. First it will prevent a twirling lure from twisting the line. Second since the reel itself is also creating twist, the barrel swivel provides a "vent" if you will, a place for twist to work itself out of the line as you retrieve the lure.

-Surface plugs, twitch and crank baits–I find that tying a barrel swivel to my main line and then about 18-inches of leader to my lures provides the same twist venting opportunity.

-Learn to close the reel's pickup bail by hand, not by cranking the reel. Always lift the rod tip to remove slack line in front of the reel before cranking.

-Feather the cast! This means allowing the index finger of the casting hand to lightly brush against the coils emerging from the reel during a cast. This slows the line just a bit and reduces bunching at the first guide.

-Never crank the reel against a strong fish if line is not coming in. All you're doing is creating twist as the bail revolves around the spool.

-Twisted line, with nothing attached, can be trailed behind a moving boat or into a current to allow the line to untwist itself.

-Spreading line across the lawn and retrieving through pinched fingers will remove some amount of twist.

-Keep a spare spool handy! When I was guiding fishing clients who needed spinning gear I always kept a number of pre-filled spools handy and swapped them out rather than deal with twisted, knotted lines all day.

Obviously, I do not have all the answers, if I did I would invent a spinning reel that did not twist fishing line. But twist or no twist, the spinning reel is a wonderful device, more popular on some coasts than ours, but definitely here to stay. As long as I have been sight-casting the flats I still find the pinpoint casting accuracy and overall control I get out of a spinning outfit superior to baitcastersand I love my baitcasters!