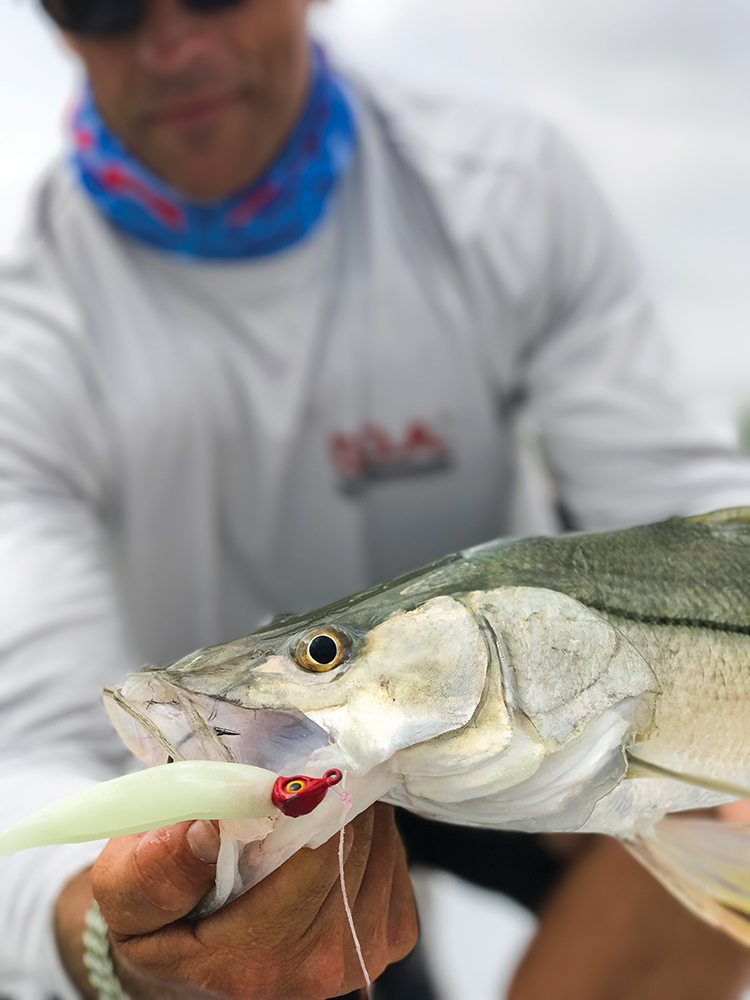 I often get asked what soft plastics I throw. When I respond with D.O.A. I get a confused look and, “You only throw a D.O.A. shrimp? I thought you threw some paddletails and other stuff.”Well of course I do. D.O.A. Lures has a variety of those, and a whole lot more.

I first met Mark Nichols several years ago in his booth at a fishing show. We struck up a conversation about his shrimp because it was one of my favorite lures for tossing at tailing redfish. To be honest, at that time, I didn’t really know much about any of his other lures. I found myself back at his booth several times during that show soaking up his knowledge and ingenuity for solving various fishing situations. Mark’s mind is always working on figuring out how to catch fish and I’m a bit of a nerd for that too. I’d always just thrown the shrimp as it was rigged from the factory, but he opened my eyes to experimenting with different ways to rig it, when necessary.

The best part was picking his brain regarding tarpon and snook. I’ve had a lifetime of chasing reds, trout and flounder. I’m pretty comfortable with my methods for those species. At the time I met Mark I had been fishing for snook and tarpon in Florida several times and wanted to get better at targeting them in Texas. Mark lives in Florida and has chased tarpon and snook for years. I threw him scenarios, locations and conditions I was running across. In turn he would give me ideas for lures, rigging and methods. A friendship was formed.

Since that time I’ve had the pleasure to spend a good bit of time with him on and off the water.Along the way I’ve also gotten to know Mark’s righthand man, Ed Zyak. Ed works for D.O.A. and also guides in Florida. The two of them put on what they call “writer’s events” where they invite outdoors writers to come and fish for a few days with local guides on their pro staff. I’ve been fortunate to attend several of these events, most recently last week in the Port Isabel area.

Mark and Ed have put together a great group of young guides down there who are passionate about chunking lures. What struck me on this trip was the wide variety of fishing we were able to do within a relatively small area using nearly their entire line-up of lures.

Day one I was paired up with Capt. Ruby Delgado. We ran all over the Lower Laguna Madre fishing a mix of shallow grass and sand. Every stop produced reds and trout. It’s been far too long since I drifted these beautiful clear flats dropping lures in front of eager fish. We threw shad tails, jerk baits and the Sna-Koil. On this day the fish seemed to prefer the shad tail in their new Texas Croaker color.

Day two I hopped on Capt. Brian Barrera’s boat along with Ed and Bill Carson, the marketing manager for Hummingbird and Minn Kota. Brian has the new Humminbird Solix unit on his boat and I was anxious to see it in action as well as have Bill give me a lesson on its use. I was beyond impressed. This thing is basically like watching an underwater video. We were even able to clearly see a stingray sitting on the bottom in 9’ of water. I’m talking the full outline, tail and the eye hump.

I’ve already got one on order for the Dargel so look for a future article on this unit once I get some time under my belt with it. I think it’ll be a real game changer fishing the jetties, beachfront and nearshore. Bill and Ed showed me some screenshots where you could easily tell the difference between snook and tarpon. Simply incredible.

Brian took us up the Brownsville Ship Channel to hunt for snook. Unfortunately, the tide refused to move as scheduled. We managed to scratch out some fish throwing the 5.5” jerk bait and PT-7 soft body topwater, but snook love water movement and just wouldn’t turn on, so we relocated to the Old Causeway Bridge and a few other areas of structure. The side scan on the Solix put us on fish holding tight to the columns up under the causeway. Paddle tails, jerk baits and the 2.75” TerrorEyz all got thumped.

While we were hanging out up in the bay, Captains Lee Alvarez and Andy Salinas ran some of the guys out to the jetties where they threw the larger 4” TerrorEyz and Bait Busters for snook and tarpon on the rocks.

As much as I hated to, I had to head back home to run some scheduled trips while the rest of the crew made plans to run offshore the following day to hit the TPWD artificial reef system.Back home and getting gear ready the next day, it was hard to open message after message with photos of smiling faces and large snapper jigged-up with the 1-1/4 ounce Swimmin’ Mullet.To add insult they also managed to snag some nice kings. I need to schedule better.

It was pretty cool to see the mixture of fish caught over that three day period under a wide variety of situations. It served to confirm that Mark’s diverse lure offerings were capable of covering most anything you wanted to do, but another interesting aspect was having Mark and Ed asking for thoughts and ideas for new lures they could produce. They weren’t talking about just recycling old ideas or putting out a new color but looking outside the box to develop a lure to solve a problem.

It’s really fun to hang out with a group of folks who are so completely eat up with fishing and I can’t wait to do it again.