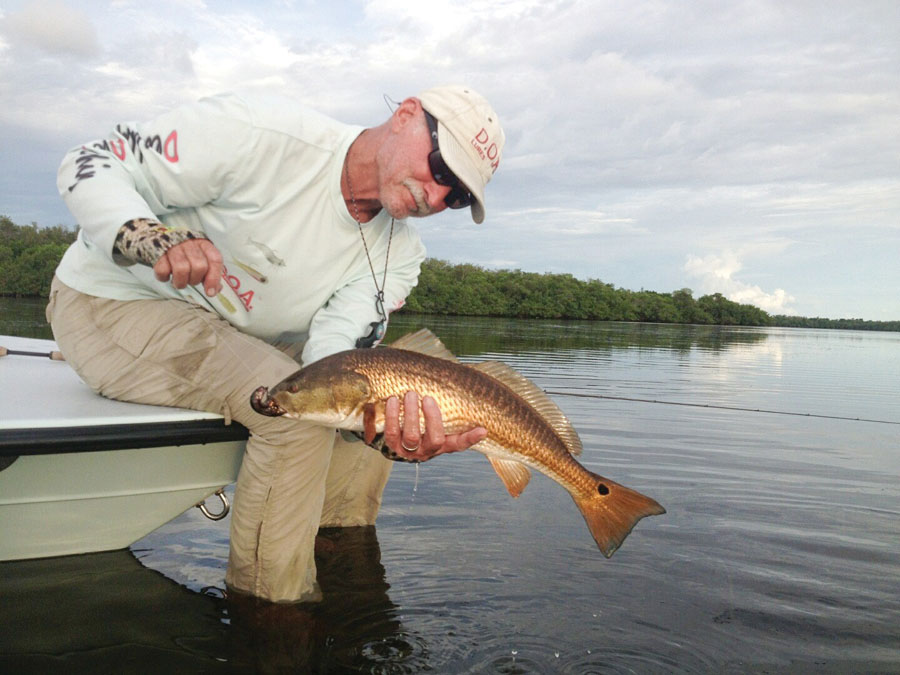 Mark Nichols; fishing lure inventor, founder and president of DOA Lures.
I'm a fortunate man. I make my living in the fishing industry. I'll never be monetarily rich, but my life feels rich in more important ways. I spend many days on the water guiding people to enjoyable memories. I spend other days on the water all alone, immersed in nature.

I also get to spend time with a variety of like-minded folks. Some are regular working guys who just love fishing and the outdoors and then there are times when I get to meet people I've looked up to for years; icons of our industry. I'm not one to idolize sports figures or entertainers; I'm more likely to be drawn to those who have spent a lifetime experiencing outdoors adventures or followed their dream to carve out a living doing what they are passionate about.

A while back I found myself sitting at a trade show having an in-depth conversation about Texas redfish with Lefty Kreh, Flip Pallot and Gary Loomis. It was almost surreal having these guys hit me up with questions about how I fish and the behaviors of our reds versus those in Florida and elsewhere. It was really interesting getting their thoughts on the hows and whys fish act or react the way they do.

Another wonderful dinner was spent talking flies and fly tying with Enrico Puglisi, one of the most innovative people in that realm.

Later I wished I had scribbled some notes to help my aging mind remember all of those little nuggets of valuable information. I recalled the high points, but I know there are things that faded away before I could carve them into my brain. But it did get me to thinking about future articles for this column. I figured if I was that interested in what these guys had to say, most likely, you would be too. Sometimes it might be a new technique, maybe a new-to-me lure or even just looking at a situation through different eyes. You never know what it might be that flips a switch and gives you that "Aha" moment. With all that said, here goes my first attempt at such an article.

At the recent Houston Fishing Show I had a chance to catch up with Mark Nichols, owner and founder of DOA Lures. We first met several years ago and run into each other at various shows from time to time. Mark grew up in Texas fishing all up and down the coast from Galveston to Corpus Christi. He moved to Stuart, Florida in 1980 and started the DOA Lure Company in the early 90s. His first lure was his now famous DOA shrimp.

I've always been a big fan of Mark's shrimp. It's one of my go-to lures for sight-casting to redfish. It comes pre-rigged with a straight hook and a small belly weight. When cast it makes the perfect splat on the surface to get a red's attention and then settles slowly just like a real shrimp. Redfish can't resist. While that's my favorite use of it, I'll also blind-cast it across a current feeding out of a marsh bayou and let it ride the flow without any flicks of the rod tip. Reds, trout and flounder stationed at the mouth of a bayou are suckers for the free-floating presentation.

As Mark and I talked about my use of his lure he broke out a few lures and a small box with a variety of hooks, weights and rattles. He then proceeded to demonstrate several ways he modifies the basic shrimp to fit different situations. To add a little weight for a slightly faster sink rate he inserts a glass rattle tube into the nose along the hook shank. For a slightly slower sink rate he removes the standard belly weight and replaces it with the glass rattle, which is approximately 25% lighter. When rigged from the nose it is important to either let the current move the lure or just swim it back to you without a lot of rod action. Watch a real shrimp in a bait tank and you'll see that this is how they swim.

When you feel the need to impart more action, Mark suggested reversing the hook to mimic a fleeing shrimp. Real shrimp kick in reverse to flee a predator and then sink into the mud to hide. Using either a swimbait or worm style hook you can clip off the fan tail and rig it backwards (see accompanying photo). These hooks can be weightless or weighted depending on depth and current.

Turns out Mark loves to come up with all manner of tweaks and different ways to rig all of his lures. He's a tinkerer, as most lure makers are. After the shrimp lesson he pulled out a few of his Swimmin' Mullet lures (previously known as the Airhead). This is a deep-bodied soft plastic baitfish imitation with a wide, beaver-like tail and a hollow belly. I've thrown them with a swimbait style hook and the tail flaps quite a bit more than you would think. With the weighted swimbait hook the lure sinks horizontally and wobbles like a wounded baitfish. It's a unique action that gets a predator's attention.

In certain situations Mark likes even more action out of the tail. To produce this he punches a small hole in the center of the tail and then cuts a slit, downward and angling toward the head. This substantially increases the flapping of the tail and makes it look a lot like a huge curly-tail style bait. Then with a little grin he asked, "Do you like topwater strikes? How about a weedless soft plastic topwater?" He had my attention.

Mark then pulled out a length of closed-cell insulating foam, the kind you use around doors and windows. He cut a small piece, opened the lure's hollow belly and slid the foam into the slot. He pinned it in place with a little piece of a broken toothpick and rigged it with a worm hook. I played with it in my swimming pool when I got home and can't wait to throw it in front of a fish. You can dog-walk it slow with all kinds of erratic action, straight reel it like a waker, or crank it fast like a buzz bait.

Some of his other modifications have led to new products that he now offers. One is the Chug Head. This is a small soft plastic head that fits over a typical soft plastic lure. When rigged with a worm hook it turns your plastic into a weedless topwater chugger. Another product is called the Hot Head. I like using swimbait style hooks with a keel weight instead of a typical jighead. The lure swims and falls horizontally instead of diving nose first. Using the Hot Head will let me do this and get a contrasting colored head with eyes just like a colored jighead. Sometimes it's the small details that turn a neutral fish into a feeder.

After an hour or so watching Mark play around with these simple lure modifications it got my mind to working. Now I'm looking at my soft plastics box with new interest. And making a lot of casts into the pool testing out some of my own ideas. I hope it spurs the same in you.