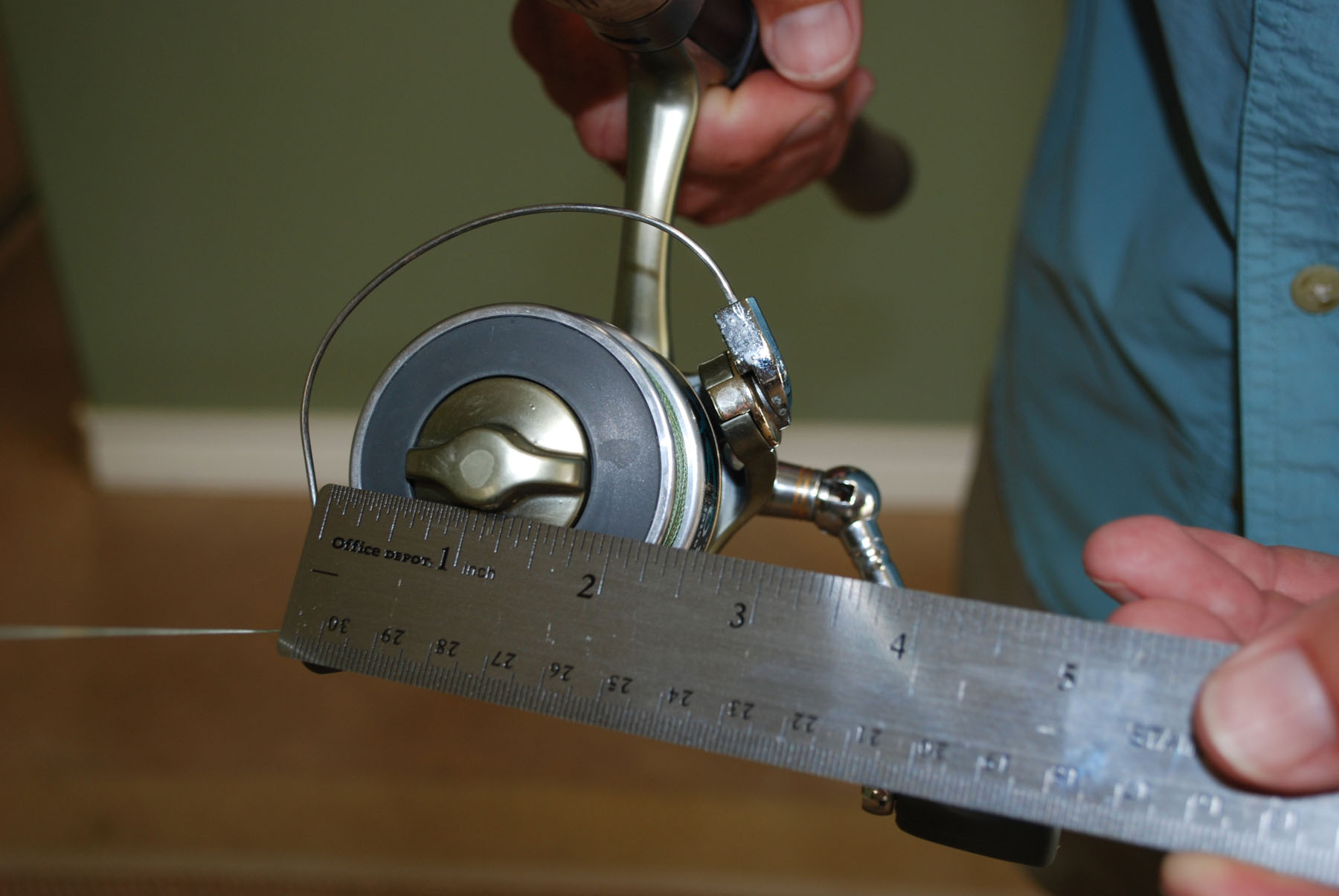 Since I already own a U.S. Reel SuperCaster 230SX spinning reel, I enjoyed your positive field support article highlighting the positive advantages. However, I wish you'd address one of the major problems that I am havingwind knots.

In addition, please go into detail relative to putting Power Pro #20 braid on the reel with the clip-on arbor spacer in place to eliminate filling the deep reel with line. At present, I place mono line on initially, then tie on braided with the triple surgeon knot to fill the reel to capacity. I use the Berkley Portable Line Spooling Station. How close to the lip of the spool should I fill this reel?

After casting I always close the bail by hand, never by simply turning the handle. I am contemplating using a small Spro swivel to reduce/eliminate line twist.

I sold my Shimano top of the line spinning reel since U.S. Reel advertised the no-wind-knot features of their reels. I have been wade fishing on the coast for the past 15 years throwing Shimano bait cast reels; I presently have two Chronarch 50-MG reels. I carry the 230SX to throw on windy days thus eliminating backlashes. Jay Watkins teaches that throwing into and across the wind keeps the lure in front of the fish, rather than bringing it up from behind them.

Many thanks,
Bob Beckett - TSFMag Subscriber

Thanks for writing. While I am no spinning reel guru; I do use them often and I did stay at Holiday Inn recently, so I'll take a stab at your questions.

First; let's discuss those nasty tangles you call wind knots. These can occur during any cast when line unfurls from the spool at a greater rate than can be funneled through the first guide, especially when the line is twisted. Snappy casts are the worst offenders, slinging the lure with more of a sidearm motion promotes smoother line flow.

Line can become twisted for various reasons. A primary source of twist can be traced to the way you fill your reel with new line. Winding line around any stationary arbor induces twist. Believe it or not most packages of line contain some amount of twist from the factory. Now to clarify the stationary arbor statement: Try rolling a 50-foot electrical cord around your elbow and between your thumb and forefinger. Long about midway the portion you have not rolled takes on the appearance of an angry slinky because you are rolling twist forward as you work. The same happens when winding line into your reel. Unless you take action to cancel the curls as they pay-off the filler spool they will become multiplied on your reel.

When installing new line, try reeling in the first twenty wraps with the filler spool positioned ten feet from your rod tip. Without winding further, bring the rod tip toward the pay-off spool. A belly of slack will hang between the roll of line and rod tip. If it hangs limp, showing only slight curling; you are installing the line correctly. If the curls in the slack portion of the line do the angry slinky thing you need to flip the filler spool over and reel the line from the opposite face. Wind in another twenty wraps and check again to make sure.

During repeated casting and retrieving a certain amount of twist is unavoidable and accumulates in the working portion of your line. Given that the U.S. Reel SuperCaster 230SX is equipped with a greatly oversized spool compares other reels in its class, fewer wraps are required to retrieve any given cast and the probability of line twist occurring is greatly reduced as well.

One way to discourage accumulation of unmanageable line twist is to give it a place to go. I have found that attaching a small, high-quality split ring and barrel swivel to the jigs, spoons and plugs I throw with spinning gear will allow the twist to work itself out of the line. Notice that I used the words small and high-quality. The addition of too much weight can affect the action of your lures. Lay in an assortment and select the smallest size and strength rating that will do the job. You mention the Spro brand. They make good gear!

Another source of line twist can be found in the manner in which lures and other terminal rigs behave during the retrieve. Any straight-bodied soft plastic can twirl when not rigged correctly. Ditto spoons; if you wind them back quickly enough, most will twirl and twist your line. Floats such as the Mansfield Mauler and the snap-on varieties ala the Alameda Rattling Cork can also twist your line with each pop of the rod tip. Always rig with a quality swivel!

I have discovered a couple of easy ways to remove twist from fishing line. One is to remove the terminal rig and trail the line behind your boat for a few minutes at moderate speed. Another method is to remove all terminal rigging and stretching your line across the lawn and then winding it back in several times. In both cases you will need to pinch it tightly between your thumb and forefinger when winding it back into the reel. Pinching the line between gloved fingers allows the application of greater pressure thereby "rolling" the twist toward the end of the line without friction burns.

What is the proper amount of line to install on a spinning reel? I find that filling to within about .020-.030" from the lip of the spool works best for me. Filling the spool to the max seems to encourage loops spilling over the edge. These guys can create an array of problems, so let's not go there. Of course it should go without saying that installing too little line will shorten your casts. Discovering the optimum fill level will take a bit of experimentation as the width and angle of the spool lip itself varies between models and brands.

Whether you use the arbor spacer supplied with the SuperCaster 230SX or elect to fill the spool halfway with monofilament followed by an 80 to 100 yard top-shot of braid is up to you. Personally, I prefer the braid top-shot as it allows extra line you may find necessary to land one of those big ol' jackfish that cruises the flats during summer. The triple surgeon's knot is a good one for attaching mono to braid, especially when there is great disparity in line diameters. Always test your splicing knots before going fishing. Otherwise a lifetime fish may test them for you in less than desirable fashion.

As for flipping the pickup bail by hand to eliminate line twist; I would have to say that while I have heard of this I have never given it a fair trial, so I will refrain from comment.

In closing I would like to say that I agree 100% with Jay Watkins. Casting and retrieving your lure into the wind or at 45-degrees to the direction of the wind (rather than directly downwind) will definitely produce more strikes on windy days. Like Jay, I discovered this quite by accident and have been fishing this way for many years.

Again, thanks for writing and I hope that my ramblings here may provide some solution to your fishing problems.