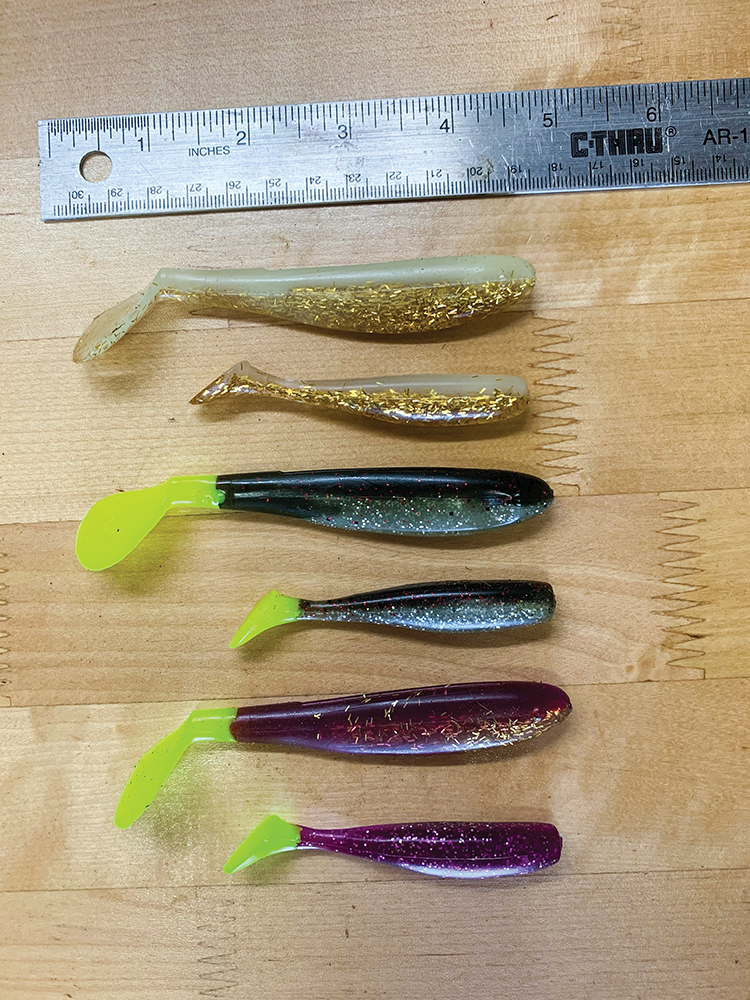 Some of the author's trusted paddletails.

For the past year and a half John Lopez and I have been co-hosting Bite Me - A Texas Saltwater Fishing Podcast. We’re just two guys discussing various fishing topics and answering questions received via the Facebook group page and direct e-mails. The two most consistently asked questions have been, “What lure do you choose to start the day?” and “When do you know you need to change lures?”  I got to thinking about it and I don’t believe I’ve ever talked about that on these pages in the sixteen years I’ve been writing. Here goes…

I wish there was a rule book or instruction manual but, alas, there is not. Many factors are at play and there isn’t necessarily a rock solid answer. A lot depends on weather and water conditions, of course, but sometimes it simply comes down to the mood of the fish. I will never try and tell you that I’ve got it all figured out. These are just things that have worked for me over the years and will hopefully help you as well.

Decisions based on weather and water conditions are the easiest. The most basic answer has always been to throw dark lures in low light and brighter lures under sunny skies. Low light can be due to time of day or cloud cover. The reasoning is that under low light a silhouette is easier to locate while in bright conditions the light reflects on the lure drawing the attention of the fish.  I’m not big into specific colors. There are dark lures, light lures and shiny lures. Very basic, but it works out for me.

Personally if I’m going to be throwing conventional gear I’ll start with a topwater, mainly because I like the blow-ups. Which topwater will be based on conditions and any bait I see in the area. In normal weather with light wind, I’ll try to match the size profile of the bait they’re likely feeding on. If I’m flying blind without knowing the current baitfish situation, I’ll choose a mid-size lure and go from there. MirrOlure’s Top Pup, the small Skitter Walk and the Super Spook Jr fit the bill.

But what about when it is dead-calm or blowing like hell? Dead-calm will make me lean towards something smaller and less intrusive. Lately that has been the DOA Lures PT-7. It is a soft plastic body rigged in weedless fashion with a large single hook and a small glass rattle – perfect for subtle presentations. Choppy conditions call for a noisy plug – the choppier the bigger and noisier – I like the Top Dog and full-sized Spook. You want to get their attention amongst the confusion of the waves.

Since most of what I like to do involves sightcasting, the next step usually involves observing the response of the targeted fish. Are they aggressively attacking the lure? Are they fleeing the splashdown? Are they interested, but not fully committing? Perhaps just slapping at it? I want to see a pattern of behavior before deciding to make a change.

Once I can see fish from the platform I’ll have an idea what they’re feeding on and can then match the hatch. When they’re eating shrimp, but skittish, I’ll go with the DOA shrimp. If they’re aggressively chasing, a small natural-colored paddletail gets the nod. When they’re on mud minnows or very small mullet you can stick with the paddletail and choose an appropriate size. I carry 3-inch and 5-inch paddletails. If you’re seeing a lot of flashy baitfish scurrying around, you might do well with the old standby gold spoon.

In blindcasting situations I’ll intently watch my topwater for clues. These can come in the form of follows, swirls and tail slaps. Non-aggressive reds will tend to follow, causing a wake, and then creating a swirl as they leave. Trout swirls are usually sudden without much warning. Same thing with tail slaps. If this becomes a noticeable pattern I’ll try a different topwater, but I’m pretty hardheaded about forcing the topwater bite. Many anglers use them as more of a search lure.  They cover a lot of water and let you know the fish are there, even if you aren’t catching them.

Once you know the fish are there but not committing to the surface plug, you need to switch over to a subsurface lure. A soft plastic worked just below the surface with pauses to let it fall, will often get you hooked up on both trout and reds. Personally I go soft plastic when I know it is reds and a baitfish plug if I feel it’s trout. When I fished redfish tournaments with a partner one of us would throw tops while the other had a soft plastic. A blow-up on the top followed up with an accurate shot from the soft plastic is dang near 100% effective.

The value of moving to a plug when you feel the blow-ups are from trout is the similarity in size and action. You can work the plug in the same manner as the topwater, but just under the surface. That is usually all it takes to make trout happy. The chosen plug depends on what I think they’re feeding on. I’m a MirrOlure guy and carry a variety of models in various sizes. I grew up throwing the 51M and will still pull it out there if they’re on finger mullet, but I’ve also got MirrOdines in various sizes for imitating shad and pinfish. MirrOminnows are in the box in case the glass minnows show up. If they’re being finicky I’ll try a Corky Fat Boy.

What about when there are no clues? That’s the time to go with whatever you have the most confidence in. For me, that would mean a soft plastic on a 1/8 ounce head. I can cover the entire water column and experiment with a variety of faster and slower retrieves to see what might work. The trick is remembering what you were doing when you finally get a bite. If you aren’t shaking your head right now in agreement you haven’t been fishing long enough.

Now for fly fishing. It’s much simpler. I tie on a Redfish Crack and the reds eat it more often than not. That’s my confidence fly. But on those rare occasions when they won’t cooperate, I get to watch their reactions from the platform. Three honest refusals leads to a change. Going smaller seems to work most of the time. Or perhaps it’s as simple as switching from unweighted to weighted. Most often it only requires a subtle change in flies to make things work. If none of that works it’s time to swing for the fences and tie on something hideously bright and obnoxious.  You’d be surprised at how often that move as paid off.

Like I said in the beginning, there are no rules to this game. Try to match the bait being pursued, pay attention to the clues about their moods and most of all, remember what the hell you were doing when that fish ate your 589th cast.