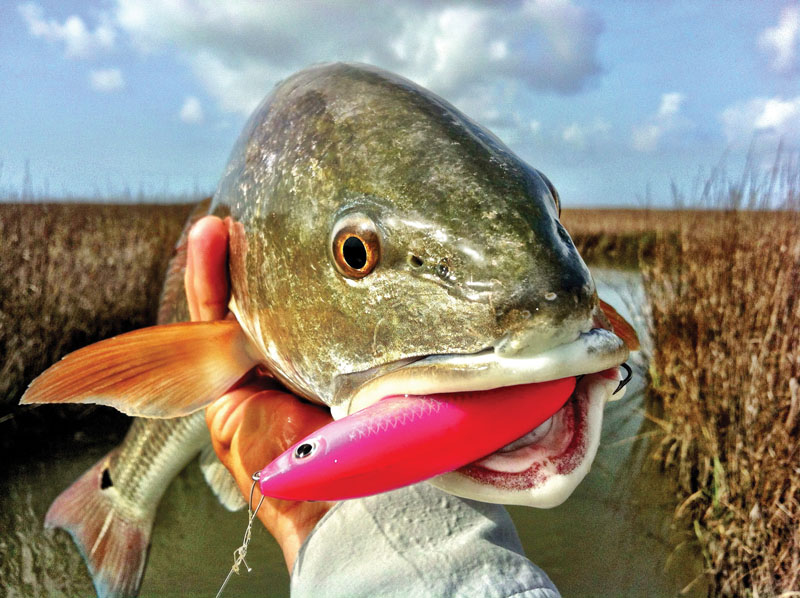 Junior-size surface plugs usually outshine their larger siblings by a wide margin in the marsh and on shallow flats.

In my younger years I used to look forward to these cold rainy days. I'd be sitting somewhere in the marsh popping ducks as they dropped into the decks and loving it. Now that I have aged a bit, slogging through a marsh and freezing my tail off doesn't seem nearly as appealing. These days are now set aside for my annual cleaning of the garage, also known to my wife as "Scott's Tackle Shop." This particular day is all about the tackle boxes. Time to replace the broken, bent or rusted parts.

Once all the tackle boxes were pulled from the boat, truck and shelves, their contents were emptied onto the workbench. It was covered with an impressive variety of lures in enough colors to make Crayola envious. As I stared at the piles I slowly came to the realization that I never threw about 90% of the lures I had in my possession. It was at this moment that I swore to simplify.

I've never been one of those guys who switches lures very often throughout the day. I'll generally have two or three rods rigged leaving the dock and most days those same two or three lures will still be there at the end. Most of the time the first will have a small topwater and the second will have some sort of soft plastic. If the third rod makes the trip it'll have something more specific to the conditions.

With that thought in mind I went on a ruthless pruning of my lure collection. For an admitted tackle junkie it was a difficult afternoon, but when all the dust settled it felt right. I was left with a few simple boxes of things I would actually tie on the end of my line. Lures I have confidence using in basic colors.

The majority of my fishing involves placing customers in a position for sight-casting to redfish in shallow marshes or skinny grass flats. From my office high atop the poling platform I get a front row view of the interaction between reds and lures. In all honesty I'd have to say that day in and day out, lure placement and the action imparted by the angler trump lure selection. Yes, there are situations and times where redfish react negatively toward a certain type of lure or perhaps the color. Most often this involves large, loud or flashy offerings presented under calm conditions.

On a recent trip the customer showed up with his own tackle box crammed full of all sorts of lures in a rainbow of colors. He proudly presented the box and asked what I thought would work. I picked a basic soft plastic paddletail on a light jig head, a fairly safe choice. As we eased into the back lakes of the marsh it became obvious the redfish were in the mood to eat. Unfortunately, they weren't fired up enough to chase down his errant casts. After a half dozen missed opportunities he clipped off the soft plastic and started digging through his box for something new. Same casts, same results. Repeat the process. Every so often a cast would land within the feeding window and he'd catch a fish. Then he'd miss a few more and change lures again. It wasn't the arrows, it was the Indian.

So what's in my boxes now? I broke them down into noisy search lures, quiet search lures and finesse. Lure manufacturers probably don't want to hear this, but I don't get hung up on the myriad of colors with slightly varying hues. Within these lure categories the color selection could be classified as light, dark, natural or shiny.

As I said earlier, my favorite game is sight-casting. However, Mother Nature doesn't always play fair. Clouds, wind and dirty water can all conspire to derail the program. On those days it's time to do some searching. First choice is a topwater, mainly because there are few things in fishing more fun than a good topwater strike. But even if they aren't aggressive enough to fully crush the plug they at least blow up on it or maybe give it a tail slap. This lets you know they're in the area and a quick follow-up cast with a subsurface lure will usually get you bit.

My topwater choices tend towards the small side with junior-sizes of Spooks or Skitter Walks. They make enough commotion to get the job done without being too intrusive in shallow water the way their full-sized siblings often do. If I have a customer who cannot master "walking the dog" I'll tie on a waking style crank bait such as the Mann's Baby One Minus.

Another great search lure I keep handy is a spinnerbait. That one is generally reserved for really dirty water as it tends to spook reds under clear conditions. But it can be a trip saver when the southwest winds turn the marsh to Yoo-hoo.

Quiet search lures come into play on days with calm winds and poor visibility due to off-color water or heavy cloud cover. Redfish living in less than a foot of water don't always like having a click-clacking, splashing topwater invading their space. This is where the paddletail soft plastics shine. It presents the proper baitfish profile and the thumping tail sends out a vibration to help the fish zero in. Water clarity determines color selection with light or natural colors in semi-clear water and darker colors in dirty water. I prefer a chartreuse tail in all but the clearest of water.

Lastly are the finesse baits. Generally speaking redfish will eat just about anything at any time. However, there are periods where they get zeroed in on something specific and will ignore anything that doesn't fit. In freshwater trout fishing they call it matching the hatch. When there is an abundance of shrimp or a large hatch of baby crabs the reds can get really picky. To imitate a shrimp it's hard to beat a D.O.A. Shrimp. It lands softly and settles naturally, a no-brainer choice.

Imitating a crab used to be a challenge unless you were a fly fisherman. Then along came Buggs. These are hand tied lures utilizing rabbit fur on various sized lead-head jigs, basically a jig that's tied like a fly. It can be left sitting still on the bottom and the rabbit fur will wave and flutter with just the slightest wiggle of the rod tip. The result is a lure that looks alive without pulling it away from a rooting fish. Reds will ease up to the Bugg and then absolutely crush it with a violent strike pinning it to the bottom. If you've got redfish eating crabs you really need to try this technique.

That's about it. My boxes may seem boring to some folks, but for me it has simplified life and made me much more efficient on the water. I still wander the isles of the tackle store looking for something new that might fit in, but I no longer walk out the door with a bag full of toys that'll never get played with.