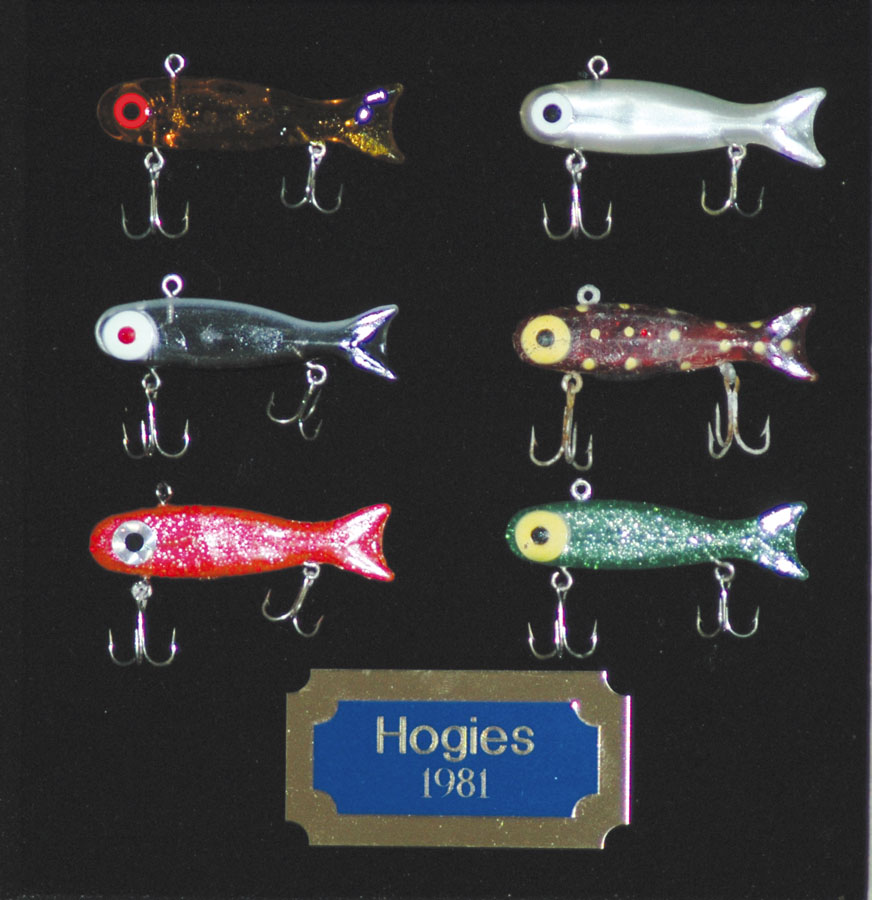 Toby Hogan’s early-80s shad style hard-bait lineup, no longer in production, excelled for both trolling and plugging.
Try to imagine cruising the saltwater fishing aisles of your favorite tackle or outdoors emporium and finding not a single package of soft plastic lures hanging on the pegs.

Sound crazy? Well, if you are part of the over-50 crowd it doesn't. Fact is, even though we have at least one whole generation of saltwater anglers born and living entirely within the modern soft plastic era, it was not always this way.

In the not too distant past, being a dedicated lure fisherman meant that you threw spoons and plugs "hardware" as they called it.

When I sat with Toby "Hogie" Hogan for an interview, he related a comic tale that was rather common for the era of which he spoke. Coming from an outdoors family, he learned to love fishing at an early age. From Yoakum and then El Campo, Palacios was a close and favored fishing destination. And so, fresh out of the Navy in 1968, Toby and his brother headed for Palacios. Short on cash (common plight of recently discharged servicemen), they had to decide whether to buy beer or live shrimp for bait. They bought beer.

His brother was in charge of the tackle but had failed to pack the box that held their "speck rigs" as Toby called them tandem jig rigs that are used to this day by some fishermen, especially under lights for speckled trout. Having already chosen beer, they were in a quandary made worse by the fact that they had no cast net.

Digging through what little gear they had, Toby fashioned some imitations of the speck rig, cutting bass worms in half and tying them tandem style on beat up crappie jigs. "They worked," he said, "and that got me to thinking."

Baby-boomers will no doubt recall toys of the 60s called "Creepy Crawlers" that were a big fad. The kits included molds and plastic resins that when mixed, poured and heated, yielded an assortment of soft, lizard-like objects. Thrifty by necessity and inventive by nature, Toby got the bright idea to make his own "worms" for speck rigs, and so it began.

Fishermen today date themselves by referring to any soft plastic bait as a "worm", simply because the earliest soft plastics were just that worms. Night crawlers to be exact. The lure that made Nick Creme famous in the 50s and 60s and still being made. Another early soft plastic was the Boone's Tout; a chubby plastic shrimp often "touted" as the original saltwater soft plastic lure, first popularized in Florida about the same time Toby got busy making baits. The term "tout" continues in use to this day to describe plastics in general, much the way any adjustable spanner is a Crescent Wrench.

Intrigued with molding soft plastic lures, Toby was soon cranking out his own versions, selling from his garage shop all that he could hand-pour. It wasn't long before he was inundated by demand. Working for Brown & Root by day, he spent long nights making and packaging lures and if that wasn't enough he was launching a taxidermy business as well. Encouraged by a steady stream of Hogie's Lure and taxidermy customers, he quit Brown & Root.

Toby's next project in lure making came as the product of another early Texas lure maker's decision to retire. Earl Humphreys, also of El Campo (must be something in the water), had built his Hump Lures into a successful enterprise and enjoyed a long run in business. "Hump" as he was known, had created a line of hard plastic plugs that evolved to become a standard by which all others were judged in Texas. Popular with anglers who trolled reefs and rivers, Hump-brand baits also won the hearts of pluggers. Many old-timers still claim the action of a "Hump" was the best they ever threw.

With nowhere to start but the only method he knew- hand-pouring, Toby mastered a technique for crafting his copy of the Hump baits in halves and gluing them together. And while Hump used a press-fitted piece of lead billet to weight his baits and provide their signature wiggle, Toby went one better and placed a single 00-Buck pellet within a chamber and it rattled! With Hump's advice, the chamber location was refined for balance and proper wiggling action through countless hours of testing. Hogie's Fishing Lures was gaining reputation.

The Hogie line continued to grow alongside the increasing numbers of anglers beginning to grasp and master soft plastic fishing skills. Within a few years the original shrimp-tail baits were refined and lengthened, losing any likeness they ever had to a Tout. Minnow-style baits were added, and then the deeper-bodied shad-baits. Then he created the Hoginar, a deep-jigging and trolling bait that commands a following on Sabine and Calcasieu to this day.

Hogie took an investing partner to help with the acquisition of high-production injection molding machinery to eliminate dependence on outside molding sources and things really began to rock. He eventually sold out his interest in Hogie's Fishing Lures to that partner in 1984, the partner in turn eventually sold to present owner of Hogie's Fishing Lures, Dusty Rhodes.

Toby's original Hogie's Lure Co., currently owned and operated by Dusty Rhodes, is still located at El Campo and continues to produce most of the original products along with designs Dusty has added. Still handmade and hand-painted as effective as they ever were more popular than even Toby probably ever originally imagined.

Fast forward after years on the sidelines, concentrating on taxidermy Toby Hogan is back in the fishing lure business!

It is evidently true that we eventually return to our roots. Now set up near Katy and marketing solely online, Toby is back to "dancing with the one that brung him." A few of his present products resemble some of the originals to a degree, most though show his inventive nature to create something new, better, and different. And just like the original Hogie's, Toby tests and refines the new products the old-fashioned way, by catching fish.

Testament to his abilities and recognizing the current croaker-craze, Toby has used the real thing to create molds from which he is, again, hand-pouring lifelike "soft plastic croakers" among other things, and has delved into hard surface plugs that are quite unique.

Hogie also has his eye and creative fingers on the recent popularity of very life-like shrimp imitations. He is currently producing these and his own special jigs (hand-poured, of course), and several other innovative designs not yet ready for unveiling. You can learn more by visiting his website and also shop his online store at www.TobyHoganFishingLures.com.

I admire men who, with blood, sweat and tears, toil long hours to develop ideas that revolutionize our sport. Where would today's fishermen be without the likes of Nick Creme, Earl Humphreys, Anton "Pluggin' Shorty" Stetner, Doug English, and Paul Brown? Notably; all these men are Texans, except Creme. Like me, he got here as fast as he could!