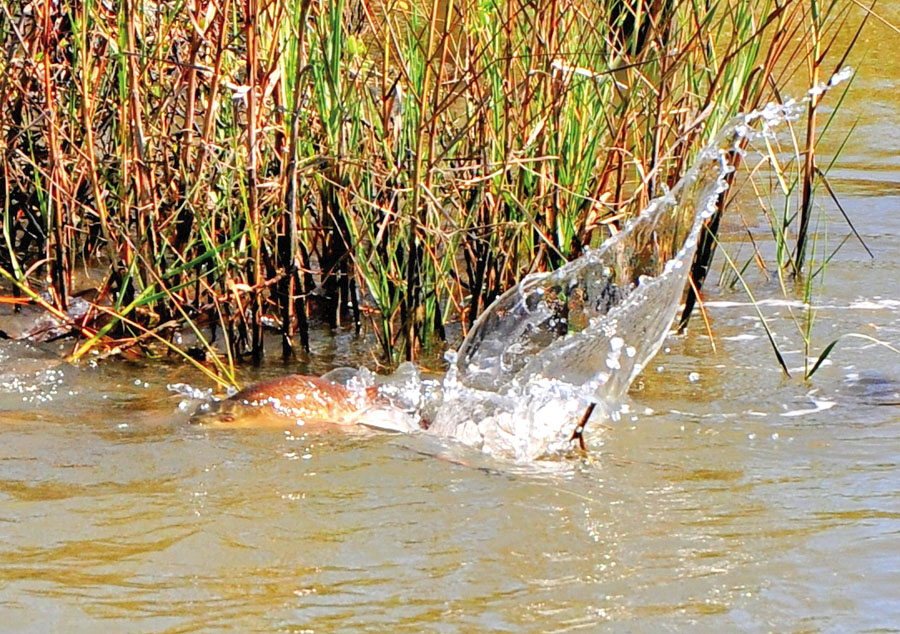 Every job requires tools. Picking the right tools for the job will make things easier and much more enjoyable. You can drive a nail with a wrench if that's all you have handy, but a hammer obviously does the job more efficiently. Going a step beyond that, choosing the correct hammer is better still. A heavy framing hammer is great for driving home a large nail with a minimum amount of effort, but it isn't going to work out so well when tapping a finish nail into a piece of trim.

Rods, reels and line are the staples of the fisherman's tool box. Walk into your favorite tackle store and you'll be confronted with a dizzying array of choices. Through the years I've spent a good amount of time talking tackle with a wide variety of folks in fishing shops, at trade shows, seminars and on the water. I'm always surprised by how many saltwater anglers don't spend much time thinking about matching the tools to the job they hope to accomplish. They'll fret and fuss over getting the latest killer lure in the perfect color, but then not think twice about how the rod they choose to throw it with will affect the presentation of that lure.

I'm certainly not throwing a blanket over everybody, but I've fished with a lot of people who show up with a quiver of rods all in the same length and action with a wide variety of lures attached to the business end. In essence they have a box of identical hammers and they're going to use them no matter the size of the nail. There's a reason the manufacturers provide us with such a wide variety of rod choices.

I'll admit that many years ago I was that guy. I liked the feel of a 7 foot medium-light. I was generally throwing a 1/8 to 1/4 ounce jighead or spoon. My main goal was to fling it as far as I could and cover as much water as possible while looking for trout. That rod worked fine. Then along came the trend of throwing big topwaters. With that same rod I could just about empty the spool on my old Shimano Bantam reels with a Rebel Jumpin Minnow, but within a couple hours my forearms would be screaming from the constant pumping of the rod to make that lure walk.

One day while wading alongside an older and wiser fella he suggested I might want to try a little shorter and stiffer rod. His reasoning was that you weren't going to lose much casting distance and with the stiffer action you didn't have to move the rod tip as far to get the lure moving. My next day on the water was much more enjoyable and the light switch had been turned on.

A lot of lure types and techniques have come along in the thirty or so years since that day. There have also been incredible advances in rod materials, blank design and manufacturing techniques. Bass anglers have always been at the fore of matching rods to lures and techniques. In my opinion some of these guys take it to a level that's a bit insane. Keeping ten rigged rods on the bow would be inviting a disaster of splintered graphite if I were aboard, but the general idea does have some merit.

These days most of my fishing revolves around sight-casting. Getting max distance to cover more water is no longer a priority, now it's all about accuracy. I spend a lot more time pitching and tossing lures at shorter distances than I do trying to hit the horizon. It more closely resembles bass fishing than traditional saltwater tactics. A lot of bass fishing involves finessing a lure into tight spots and then wrestling the fish out of thick cover. With that thought in mind I started looking to the variety of rods offered in the bass world. What I found were rods designed with somewhat softer tips that load with less force while still maintaining stiffer mid and butt sections. My favorite for throwing 1/16 to 1/8 ounce jigs is what the bass guys refer to as a "drop shot" rod. For me it is the perfect action to gently toss a lightweight jig onto the nose of a redfish, yet still has the strength to control a really mad eight pounder.

The only issue with this plan was finding rods with components that would hold up to the saltwater environment. No matter how much I rinsed, I still watched a lot of eyes disintegrate. I was about ready to get back into building my own rods, but thankfully Temple Fork Outfitters (TFO) came out with their new line of Gary's Tactical Series rods. Every rod in the series, whether designed for fresh or saltwater, is outfitted with their proprietary Tactical Series guides. The stainless inserts are swaged into stainless frames. I've been using them for the past year with no popped eyes and no rust. I think they have a winner.

I've also taken this same line of thinking into my fly fishing. I used to carry one stick, a nine foot 8wt with a weight forward floating line. It is considered by many to be the standard for Texas saltwater bay fishing. It will certainly get the job done and if you're only going to have one rig, this would be a good bet. But where's the fun in that?

A couple years back I started playing around with setting up different rigs for specific conditions or situations. My first venture was directed at finding a setup for hitting those reds that suddenly show up really close to the boat. We don't always have those perfect conditions of light winds, cloudless skies and clear water. When conditions are less than perfect a lot of the shots are too close for the old standard rig. You can't get the rod loaded for the cast without enough line off the tip and thus end up spooking the fish with a poor cast.

What I came up with was pairing TFO's Mini Mag 6/8wt with an 8wt Bermuda Shorts line by Royal Wulff. Much like the bass rods I lean towards, this eight foot rod is designed for casting accurately into tight spaces with enough butt strength to yank a big fish out of thick cover. The Bermuda Shorts line has a very short 22' head instead of the standard 30' found on most lines. You won't win any distance competitions with this rig, but it excels at the short game. Having the ability to quickly load the rod with a single backcast and deliver the fly to the red without spooking it has put a lot of fish in the boat that would have been difficult, if not impossible, to pull off with a standard set up.

Since then I've added a 7wt with a bonefish line set up for long distance shots on calm clear days, a brutish 10wt for tossing bigger flies when the reds are eating big crabs or large mullet and a cool little 4wt for playing with the rat reds. Having a wide variety of rods available probably isn't everyone's cup of tea, but I've found it to make me a more productive fisherman and I don't get frustrated trying to make a rod do something it wasn't designed for. Step outside the box and you might be surprised how much more enjoyable your time on the water can be.