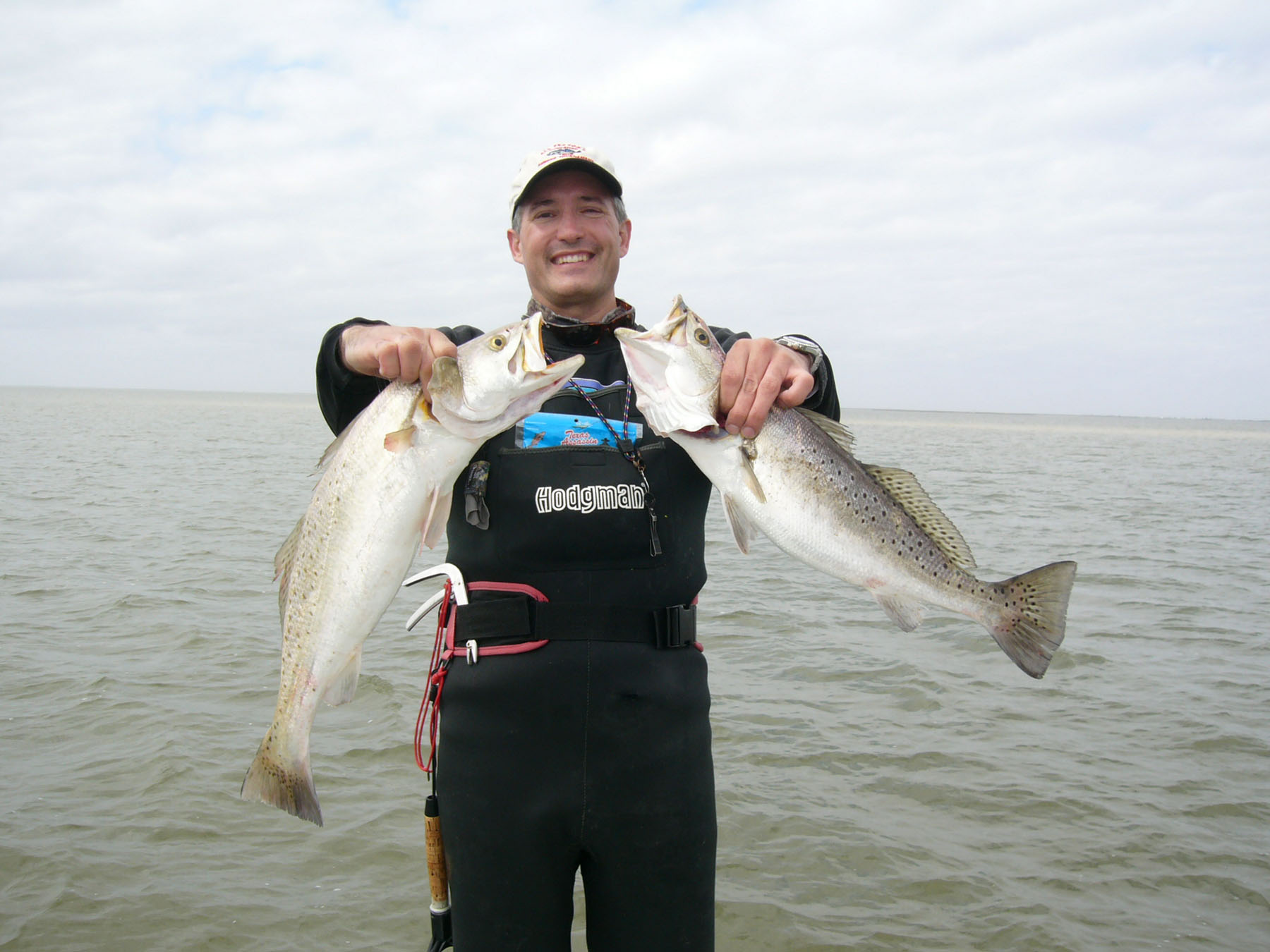 Brian and James Smaistrla, Mike Carter, and Capt. Bill fished at the Matagorda Harbor 02.19.07.
Both East and West Matagorda Bay systems are looking very good to me at this time. April should be the pick of the litter and with small glass minnows already showing up in West Bay that tells me something is getting ready to happen.

April fishing in West Bay perks up when those glass minnows come around, not to discount the nervous mullet that are excellent signals as well. If you get out there try heading toward the Cullen Houses all the way down to Airport Flats. Just dial your eyes into the bait fish and as a rule fishing is best on an incoming tide.

Prepare yourself against the sharks and stingrays over in West Bay. As a general rule, I wear the ForEverLast Ray Guard Wading Boots to protect myself against stingrays. Sharks can also be a great nuisance and they seem to get smarter each year. I like using a good wading net to net my fish instead of trying to grab with my hand. God forbid the outcome of trying to grab your fish just as a hungry shark explodes out of the water to get there first. Ouch In addition to your net you might want to think hard and heavy about some type of floating basket or cooler for you to put your fish in and then secure around your waist instead of using a stringer. Boy do I have some stories as do plenty of other fishermen, just be safe instead of sorry.

East Bay, as you know, is my first pick but I will tell you that if the wind kicks up and the water gets dirty I've been known to mosey on over to West Bay despite the critters. The water on the south shoreline of West Bay is usually clearer than East Bay on a strong south or southeast wind. As April comes in some of the big trout over in East Bay will still be on mud but as the month progresses the fish will be moving to shell. There could be some bird activity but nothing like the fall months. Drifting deep mid-bay scattered shell and wading the south shoreline and shallower mid-bay reefs is my expected plan of action. Watch for your baitfish.

Baits to use won't change much except for the addition of some new products that just came out. Bass Assassins in Roach, Bone Diamond, Pumpkinseed, Red Shad, Salt & Pepper, and the new Slurp 5" Sea Shad in Drunk Monkey, Electric Chicken, and Good Penny will be on my ticket for jerk baits. You might even try them under a cork because it does work. Topwater picks are Mirrolure She Dogs 83MRGCRCH, GCRRH, FT, NSCH, CRBK, and CRBN for both bays.

For your rod and reel combinations I'm still using the Shimano Crucial 5'9" casting rod from last year. This rod has plenty of miles and wear but I'm determined to use it until it breaks. Shimano makes the rod in the 5'9", CRC-59MH, 6'3", CR-63M, and 6'6", CRC-X66M, as well as, other flavors but for wade fishing throwing plastics and tops these are the ones I would use. As for your reels, the Curado 100D scratches my itch because the reel casts good and it holds up in the brutal elements we find in saltwater environments. Shimano did come out with a new reel, Citica, which has replaced the old green Curado. For a reel that is smooth, with 5 ball bearings, and casts far with a good drag for only $119 it's a no brainer plus I was informed that this reel holds up in saltwater very well.

Looking forward to some good April fishing and hopefully my sharing tips help you to be a better fisherman. Until next time God Bless and enjoy your family during the Easter Holiday.