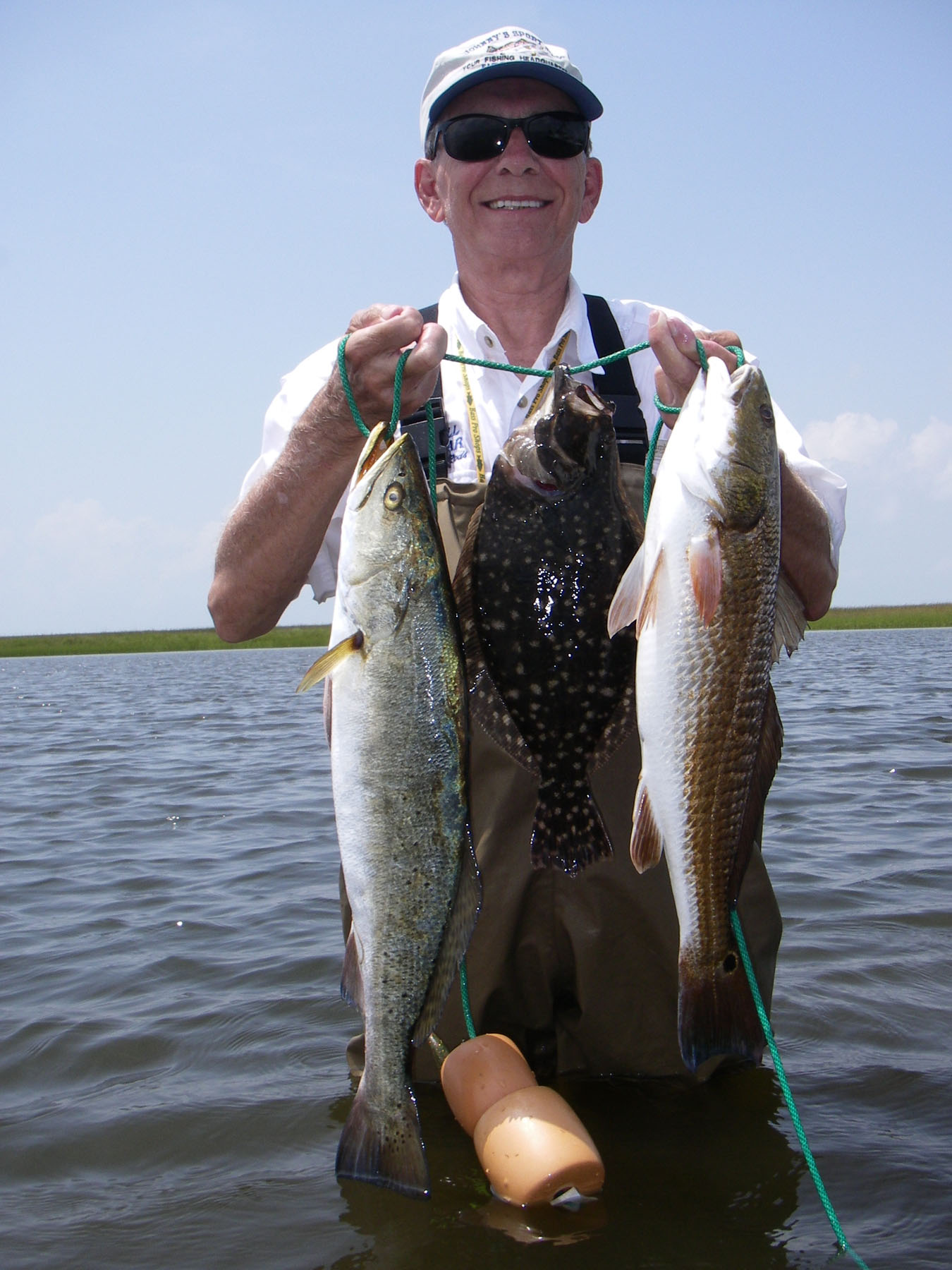 Looking back at recent patterns and fishing results, I would say that overall it has been fair to good here in the Matagorda bays. High tides, stormy weather, and a flooding Colorado River have been our adversaries. While East Matagorda Bay was awash in muddy water, I retreated to West Matagorda Bay to wade the grass beds and bars. We threw a lot of Mirrolure 74 MR topwaters and Saltwater Assassin Blurps. A lot of reds fell to the Blurps with our trout catches coming mainly on the 74 MR plugs. Fishermen using live shrimp under a cork in East Bay faired well while drifting scattered shell in the middle of the bay. We did have a few good days drifting East Matagorda Bay and wading the north shoreline throwing the 83 MR in NSCH (black with a chartreuse head). All in all we can't complain, just have to take it as it comes.

Hopefully, August will bring us a clearer East Bay so that we can hit those reefs and check them out. Topwater action will be Mirrolures 75 MR-CRBN, 75 MR-CRCH, 83 MR-BNSCH, and 83 MR-GCRCH. Plastics will be the Blurp in Drunk Monkey, Golden Bream, and Root Beer 4" sea shad. Sometimes while wading I'll use a cork with my soft plastics, especially if the water is off-color. Of course, the regular sea shad in Morning Glory, Roach, Bone Diamond, and Pumpkinseed will also pay off.

Check out the wells in West Matagorda Bay and also the reefs back behind Oyster Lake in Tres Palacios Bay. Oyster Lake will sometimes go on fire with redfish action in August. Watching for the surf to pan out could be a "no brainer" if you can get in when it's right. Call me or email me and I'll be glad to tell you what's going on here in the Matagorda Bay system.

Let's talk about a recent trend here in Matagorda, especially in East Bay, that I think deserves some serious discussion. For years our homegrown Matagorda guides have done their best to protect our bay system from the widespread use of croaker as bait, and for good reason. We've thrown shrimp, mullet, menhaden (shad), and all forms of artificial baits and done a pretty fair job of putting our clients on fish.

May, June, July, and August are critical trout spawning months and anyone that has done their homework knows that live croaker are an incredibly effective bait for spotted seatrout. Some believe the croaker is a natural enemy to the speckled trout because they eat the trout eggs. Whatever the reason, fishermen throwing live croakers can take limits during times when other baits and lures will catch only a few. East Matagorda Bay is a small bay, about 16 miles long and only 3 miles at its widest point. This bay runs 5-7 ft deep on the average. It is largely landlocked, meaning that it has no major rivers entering and there are no passes to the Gulf of Mexico to aid in replenishing our fishery.

Yes, at this time the use of croaker as bait is legal but those of us who have fished here a lifetime fear there are great ramifications. Selfish individuals who have no appreciation for the fragile nature of this bay system have taken it upon themselves to whack limit after limit of heavy female trout during the peak spawning months. Hauling their bait from out of town in oxygenated tanks, they are leaving with ice chests filled with their catches, too embarrassed to clean them at the local marina cleaning tables. Sadly, this has become a daily event. East Matagorda Bay, in my opinion, is taking a hit that it may not be able to bounce back from.

I shiver to think that what happened to Port Mansfield and the Lower Laguna Madre will also happen here. As of September 1, 2007, Port Mansfield will go to a 5 fish trout limit because of overharvest. What we saw here in the first part of June was 9 to 10 croaker fishermen coming to East Matagorda Bay using 5-6 boats equipped with oxygen tanks and leaving with 80 trout that measured from 22 inches to nearly 30 inches with 8 of these measuring over 25" and all were filleted. This is now happening on a daily basis and has been drawing a ton of attention.

My personal mission in all of this is to hopefully bring an end to this daily destruction of our trout resource. No, I cannot do it alone but I am doing all I can. A few friends and I will be traveling to Austin to make a presentation to the Texas Parks & Wildlife commissioners in the very near future. A study on the effects of live croaker as bait will be needed, along with a population growth pattern for Matagorda. My last ditch effort will be a campaign to ban the use of croaker entirely. I understand that everyone may not agree with me but that is your choice. All I can tell you is that I have grown up with these Matagorda Bays and I feel a commitment to do my very best to maintain what I have come to know and enjoy so very much.

Petitions have been placed in various areas around Matagorda and Bay City. My website will also have a petition for you to sign, if you so choose. Yes, one person can make a difference but a team effort is much more powerful. I urge each and every one of you to take an interest in preserving our environment for ourselves and our future generations. Don't take a backseat and let the car run off the road. Take a stand and do what you think is right by getting informed and active in maintaining the health of our bay systems. Thank you in advance for becoming involved to protect our natural resources and God Bless.