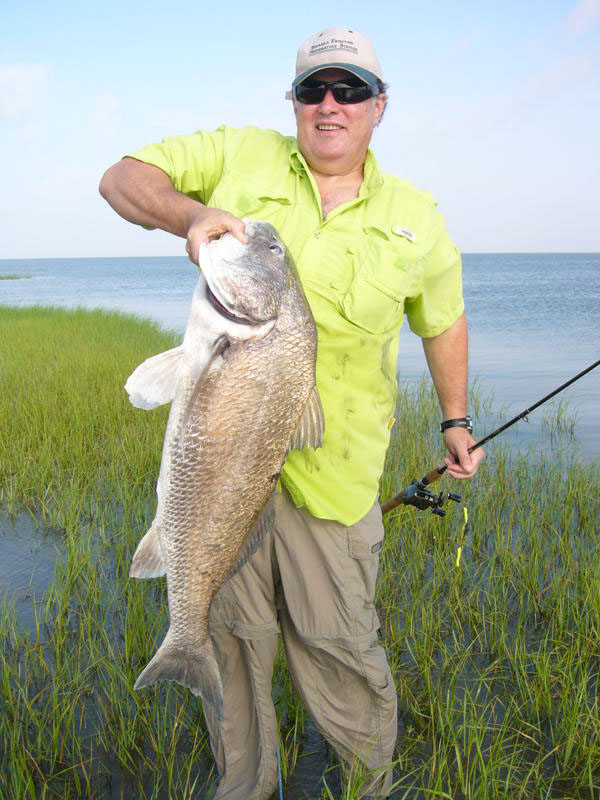 Bob Prince with a 25 lb black drum caught on a Bass Assassin wading in West Matagorda Bay.
When the wind subsided back in late June and early July it was like a light switch had been thrown, the bite really turned on. I expect that with continued favorable weather conditions this scenario should flow right on into August, although understandably with a little added heat, and provided the dog days are not too many in a row. With that said you'll want to make sure to have extra water and sports drinks on the boat and pass on the alcoholic beverages as they will dehydrate your system and could possibly lead to heat stroke.

It will be hot as Hades but my fishing tactics won't change much. I plan to leave in the pre-dawn hours and get my fishing in early, returning to the dock by 1:00 PM. Hopefully, I will be able to fish from 3:00 AM until around noon. My preference is a new moon (its dark) for a somewhat steadier bite but I also like a full moon because your eyes are able to adjust to the moonlight making fishing quite a bit easier. Always have some type of light on your head to use for tying knots, unhooking fish, signaling wade partners and, of course, to signal any oncoming boats. My night fishing will more than likely be in East Matagorda Bay as entertaining sharks during the nighttime hours over in West Matagorda just isn't my idea of a good idea.

Good numbers of fish are being brought in from both East and West Matagorda Bays the past couple of months. Bass Assassin's 5" Hot Chicken and Sand Trout have taken center stage. Both new colors have earned their keep and are also available in the Sea Shad series. I suppose these new bait colors are not only designed to catch fishermen, but fish as well. They're eating them up.

Best topwater picks have been She Pups in CRBN, CHPR, and CRRH. Another topwater bait that has been producing well is the Super Spook in Okie Shad. To me, this is a clear-water bait and great to use in West Bay over grass beds. It has proven a good choice for us lately.

I think too many fishermen just go through the same old motions and I constantly remind everybody to consider conditions and plan their trips to East and West Matagorda Bays carefully. Successful East Bay wading during the summer rush requires fishing the shorelines early while ending up on a deep reef. If you decide to drift, be sure to drift over scattered shell and be on the lookout for fresh slicks and jumping mullet. I have seen too many people get fooled by slicks that are stung out or others that came out of crab traps. Neither of these are likely to help you find a tug on the end of your line. Decent West Bay wading trips will entail locating pods of mullet and I cannot stress that enough. By August all the glass minnows will be gone and mullet over grass beds will be your best bet. If the surf is right, I'd beat out there. Even on good days it doesn't always hold for more than a few hours.

One last thing...thank God for no hurricane last year and I'm praying we are spared again this year. However, preparation is always the best plan. For those of you with camp houses and boat slips on the coast and others who store their boats locally, be sure to check the condition of your boat trailer, tires, wheel bearings, springs, etc. Most individuals who trailer infrequently, and only to and from the boat shed when they do, never think to look at their trailer until it's too late. I'm not sure the number of people out of electricity and gas after Ike due to gas station closures but I'm sure it was large, so here's a tip. Keep your boat filled at all times and consider its fuel tank an emergency supply. Most bay boats hold anywhere from 40 to 60 gallons of gas and offshore boats hold even more. That's a big safety net to run generators and vehicles just in case you need it. I hope we don't experience any hurricane activity this year but August-September is the normal timeframe. Be prepared!

Until next time; Good fishin' and God bless. -Capt. Bill