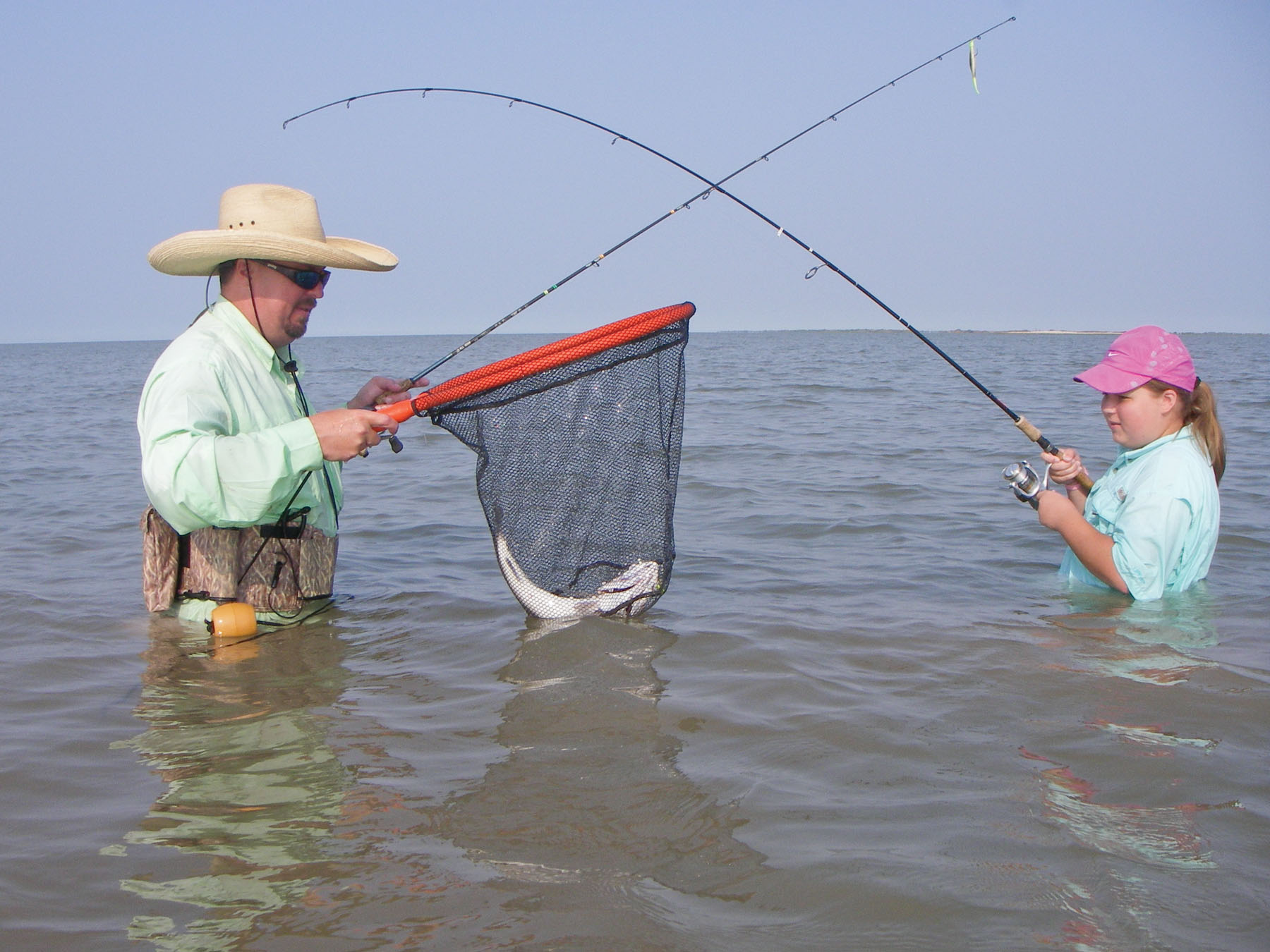 Ron Angst and daughter Hailey team up to land a nice speck.

Hello fellow anglers, it looks as though summer's dog days showed up a tad early this year. Hopefully by the time this story hits the newsstand, we will have received some much needed rain. Recently, our local parched lands collected only about 3/4 of an inch while neighboring areas just a hop, skip, and jump around the corner got nearly twice or three times that amount. Overall, our Matagorda Bays are holding up well despite the lack of rainfall although steadily increasing salinity is evident.

Shad and mullet have been the most visible bait in both East and West Matagorda systems. Missing are the shrimp which is the food source for most all swimming creatures lurking in our waters. I'm sure most of our shrimp population high-tailed it deep into marshes and back lakes searching for the right salinity levels and I hope they found it. Normally, this time of year, we are seeing a lot of shrimp mainly on the mud bottoms of East Matagorda Bay while wading. My point is that the lack of shrimp could have a negative effect on the ability of our speckled trout fishery to thrive.

Shrimp productivity not only directly affects your average fisherman; it is also a mainstay for local bait camps. Matagorda has two bait camps Rawlings on Beach Road and Russells Bait & Tackle at the Matagorda Harbor. Russell and Brandy Hicks operate one of the finest bait camps on the Texas Gulf coast. When you walk in, expect to find the place clean and well-stocked with tackle, drinks, ice, offshore bait, shrimp, mullet, croaker, etc. The daily hours are long, and they are typically open seven days a week. Owning and operating a bait camp requires a unique individual. Most fishermen fail to realize what goes on behind the scenes for a bait camp to run efficiently.

For instance, as I was rolling into the harbor after a long day of fishing last month and the shrimp boat was just pulling up. The parking lot was filled with trucks and trailers. Russell was trying his darnedest to bring in some live shrimp for his customers. I walked over as he was dipping what shrimp he had been able to catch from the boat tanks. His face told the story as he subtly remarked, Wheres the shrimp? I replied, They will come, we just need some rain. We're in a bad cycle right now. As I spoke those words, my heart began to sink understanding full well that no one knows what the future holds. What comforts me is the fact I know who holds the future.

So, the next time all you fishermen are hurrying to get on the water, standing in line for bait, etc., be patient, wait your turn, and take into consideration all that goes on behind the scenes to provide your fishing products. Running a bait camp is nearly a 24/7 undertaking and the focus is on providing for the needs of you the fisherman.

As far as area fishing goes, finding a stable pattern has been somewhat challenging lately. Where you caught fish the day before may not be where they are today. You just need to keep moving from spot to spot until you locate a few fish. My best bet will be to wade the reefs and drift the deepest waters over mud and shell in East Matagorda Bay.

August fishing is normally a little more challenging than other months because of the heat and slower tides. We typically see a lot of slack tide days in August. I have already checked and am preparing to spend time fishing around cuts, passes, spoil banks, and off the Intracoastal Waterway (ICW). Moving water should be the key. That's why I mentioned the cuts and passes along the ICW. Those desiring to beat the heat might try fishing at night... the choice of more and more anglers each summer. Remember, fish have no concept of day or night; their seers and smellers work just fine either way. Maybe Plan B or C might read surf fishing... who knows.

My go-to baits will not change much. Bass Assassins in Roach, Bone Diamond, Chicken-on-a-Chain, Hot Chicken, and Fire Tiger will be the frontrunners. When I throw topwaters they will be MirrOlure She Dogs and She Pups in various colors. Remember whatever you use in the bays will carry over into the surf when fishing conditions get right out there. Hope to see you there.