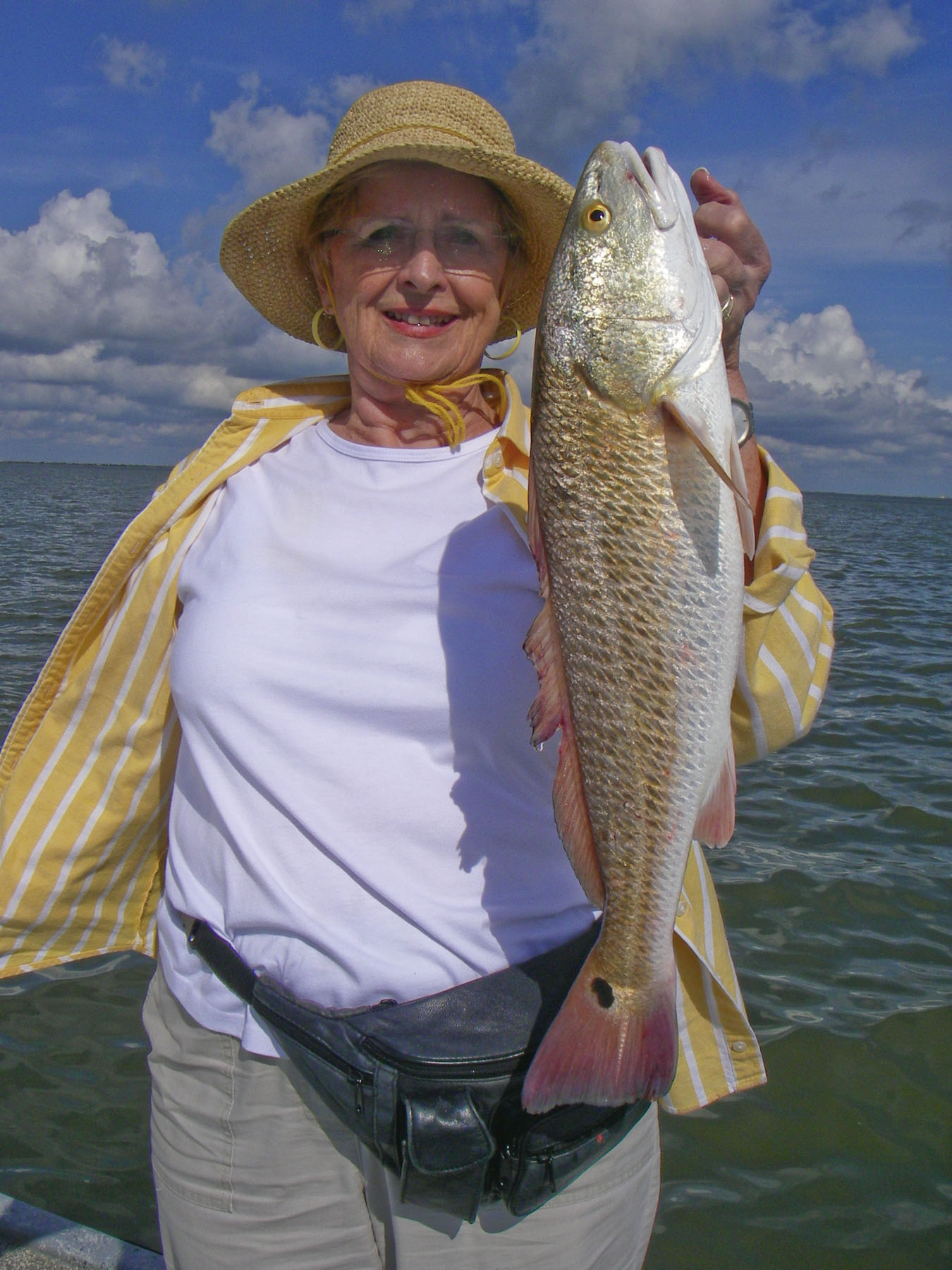 Jane Baugh drifting East Matagorda – nice redfish – hot chicken Bass Assassin.
Though sometimes light on participation, December fishing has been known to turn heads when the photos get circulated. The month's fishing patterns are largely dictated by weather and water temperature and also quite often by the final stages of the fall shrimp migration from the bays to the Gulf. Trout and reds begin feeding primarily on small finfish, crabs, and eels after the shrimp are gone. Metabolism levels of gamefish will decrease resulting in shorter feeding periods each day and sometimes only one or two good feeds per week if it gets real cold. The weatherman holds the cards and for the most part temperature will dictate feeding and activity in general so we need to consider this when planning our fishing trips.

Taking a look back at last December, my records show that fishing remained very good through the eighteenth of the month. During that period shrimp were still in the middle of the bay due to the generally mild prevailing weather conditions. Every year has its own weather signature so we just have to roll with what comes our way. One inevitable challenge faced each year by fish and fishermen alike is adapting to cold water. When fishing colder water temperatures, it is mandatory to understand the complexities taking place within the fishery. For example, as I have often stated, fish body temperature is equal to the water temperature. Therefore, to produce steady catching, our presentations will need to be in synch with the environment. A slow crawl can be the ticket on cold mornings and during periods of heavy overcast but not always necessary during warmer and sunnier afternoons, especially in shallow water. Savvy anglers will vary their lure selection and speed of retrieve based upon the general level of bait and gamefish activity that can be observed.

Picking your days and even targeting certain times of the day becomes increasingly important as December rolls along. Many times my boat will not leave the dock until midmorning, purposely delaying the start of a trip to allow the midday and afternoon sun to warm the surface waters. Mullet are an important food source for trout in December and they become very active during these daily warming periods. Any location with mullet activity at the surface, be it a cove, shoreline, or reef, deserves investigation. Wading generally soft and muddy regions with scattered shell with lots of mullet activity - is a solid game plan. Drift fishing mid-bay reefs and muddy flats can also be productive, but here again the bait activity is the primary key. I have found the bite slow at times even when the bait is active but rarely find a good bite without bait showing at the surface. On windy days when the bay goes badly off-color I like to head to the Colorado River and the Diversion Channel. Last year we found more than a few reds on windy days in the Intracoastal Waterway.

If you enjoy catching redfish, try West Matagorda Bay's south shoreline after a front. Tides should be low and the fish will be on the sandbars, guts, and in-between. When you catch it right you will be able to see the reds cruising and sometimes tailing in the shallows. What a sight! And what a fun day you can have wading and sight-casting to them.

A few lure suggestions that have been proven producers in Decembers past: MirrOlure's Catch 2000, Paul Brown's Original Corky and Fat Boy, Fat Boy floaters. Color selections should include pearl chartreuse, pearl chartreuse w/gold sides, and one of my all-time favorites, mullet color. Fish these guys slow and with a twitch for best results. I will be using Bass Assassins mainly in the mud and my favorite colors include hot chicken, roach, opening night, sweet pea and 10W40. The above baits will comprise my personal arsenal for the next several months of winter fishing; unless of course something catches my eye and I catch fish on it.

Karen and I would like to wish all great hunting and fishing and a Merry Christmas and Happy New Year. God Bless! Capt. Bill