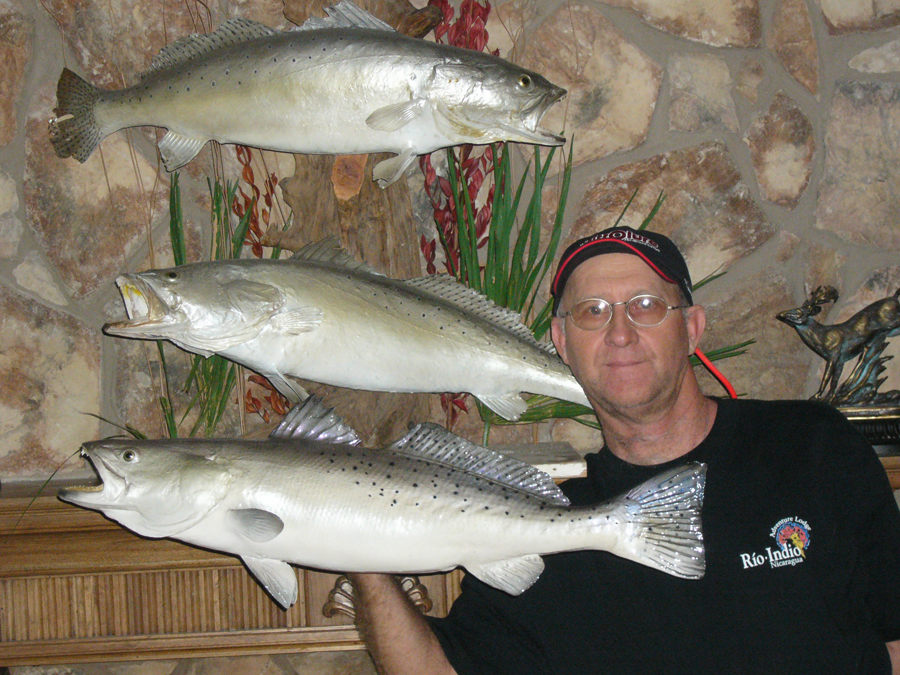 These are the largest trout Capt. Bill has taken out of East Matagorda Bay; top 32” and 11 lb-4 oz, middle 32” and 11lb-1oz, bottom 31” and 10 lb-3 oz.
Going back in my records and memories,  2006 ranks as the best fishing year experienced for at least the past several. Up and down the coast our reds and trout populations are flourishing. In fact, I believe there are more reds and trout in our bay systems than there ever have been. These thriving populations of trout and reds are doing so mainly thanks to the Texas Parks & Wildlife regulations that hit the table a couple of years ago. Allowing fishermen a 10 fish limit with trout at least 15 inches while keeping only 1 trout over 25 inches and 3 reds between 20-28 inches per day total bag catch has without a doubt pampered these two species of fish. In addition, we are noticing more fishermen using the catch and release method with their big trout than have in the past. This is a very good thing and I applaud those that have reached that level of fishing maturity, including myself.

Think about it…. How many big trout does a person need to mount over 28 inches? Let’s take a look at this. Skin mount trout to me look more original than a replica. For example, if you shoot a big whitetail you don’t get a replica made, you get the real thing. Same thing goes for me with fishing so I personally don’t have a problem with a fisherman catching a 28-32 inch trout and having a skin mount made to hang in the house, office, or wherever he/she chooses. Here again one or two big trout in a period of years I’ve come to conclude should suffice the itching. Our bays are in good shape now and if we all work together we can keep our fisheries that way and even improve them.

Let me explain why I personally won’t be mounting any more big trout. I have been fishing since I was knee high to a grasshopper with no limits on trout for the most part of those years. I’ve probably mounted at least 20 trout 28-32 inches during my fishing career. Yeah, you can call me stupid but I also know a lot of other fishermen have done exactly the same thing. Those days are over and to be honest with you I couldn’t feel any better knowing that I can catch a 30 inch trout, hold her in my hands, carefully slip the hook out, and watch her swim off with her eyes looking right back at me. Folks, that’s when my personal fishing maturity knocks at my door and says “I’m here.”

With all that said, the next couple of months have come to be known as “big trout” months. Think about what you are doing when you stumble upon those big fish.  One thing for sure if you hook onto a big trout and the lure or hook is down deep while she is bleeding out of her gills and down her sides keep her and mount her because she will surely die if you try to release her back into the water.

Fishing for me pretty much winds down the middle of December and starts back up around February. Like I’ve mentioned before, you are going to have some good fishing days in between, but those days are just not “bankable” enough for me and personally I need some time away from fishing to do things like hunting which is now a great passion of mine. Anyway, when I do get back on the water in February I will be in East Matagorda Bay wading mud and shell while looking for mullet. Normally, because of the cold water, the bite will be slow until midday when the surface water temperature has had a chance to warm up a bit. Afternoon fishing is more than likely a better bet because of that reason. I’ll usually start out the day with Bass Assassins until I get some bites then switch over to Corkies or Mirrolures. On a good sunny day with strong tidal movement, I might use big topwaters as well. Don’t forget to plan your fishing trips 4-5 days before a full or new moon and 4-5 days after for your most productive times because of the flushing of tides.

Drift fishing in East Matagorda Bay could also pay off.  Try to fish mud and scattered shell and look for jumping mullet, slicks, and off-colored to streaky clear water. Bass Assassins and the 52 Series Mirrolures will work best.  Looking for another good year… hope like the last. See you at the Houston Fishing Show in the George R. Brown Convention & Exhibit Center February 28- March 4.