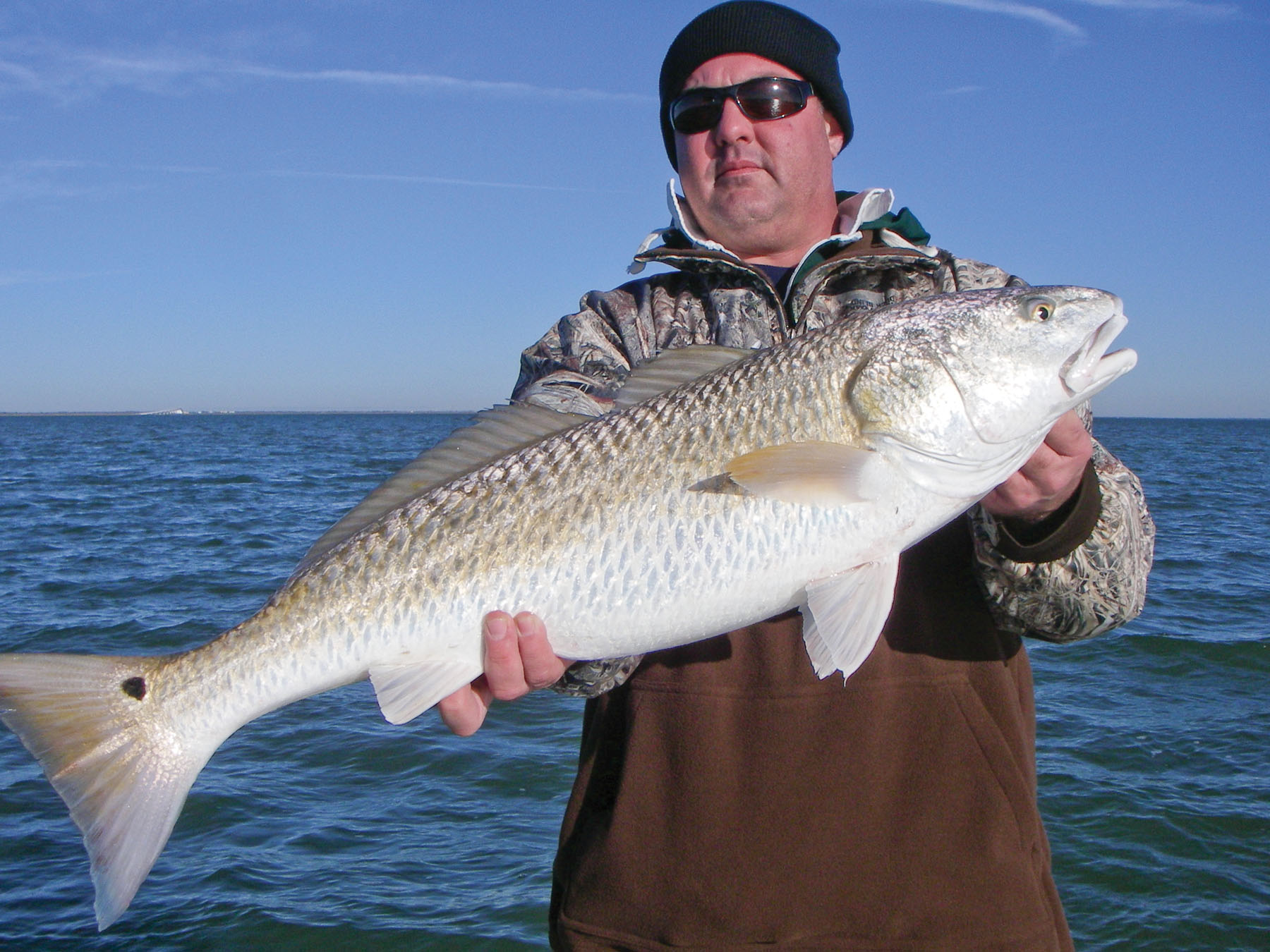 Joe Gandy with a gorgeous thirty-three inch redfish caught on a Bass Assassin in East Matagorda with Captain Bill.

February is known as a great month for big trout up and down our Texas coast. It also has the distinction of being the coldest month with the coldest water temperatures out of the whole year. February fishing requires some preplanning in terms of picking best days which typically are a day or two before and the second and third days after the cold fronts. Hopefully, we will be spared from extreme cold temperatures this February.

Within the last two months a lot of five to seven pound trout were caught by hardcore wade fishermen with a handful of eight pounders as well. From what I understand, all these fish were released. Bink Grimes of Matagorda Sunrise Lodge took out for East Matagorda Bay one afternoon in late December after a morning goose hunt. His party caught and released six trout in the five to seven pound range while drifting over shell in the middle of the bay. That picture in and of itself proves that our little bay is staging up for a great February. We have big fish on our shorelines and in the middle of the bay which is a real good scenario.

Tactics for February fishing include fishing smart and doing your homework. Personally, my focus is going to be on days when we will be getting an incoming tide in the morning or at least earlier in the day. Remember that our winter tides do not often exert that big push of water like we see in the fall or in the spring. They are usually noticeably weaker but still have a very positive effect on feeding behavior. Like I said above - try fishing before a cold front and about two days after for best results. You'll want to fish shell and mud close to deep water and, if possible, close to a cut or pass coming off Intracoastal Waterway. Also, even though the spot may have been a solid producer in the past, budget your fishing time carefully. If I have not seen bait activity or received a bite in fifteen or twenty minutes, I will be back in the boat searching for another spot. Finding mullet is the single most important thing during these colder months.

Now along with those mullet I'm going to be looking for slicks. A slick made by a trout feeding on mullet has a very distinct and very strong smell to it - extra sweet smelling. You can bet on big trout being in the area if you come up on three or four strong smelling slicks. This normally occurs while drifting as you are covering a wider swath of structure than you can by wading. When you find this, if the water depth will allow, get out of the boat and wade slowly and carefully

On your falling tides, try to fish the little sloughs and guts coming from the south shoreline. Look for a muddy bottom mixed with some shell along with baitfish in the vicinity for best fishing. You more than likely won't see a lot of mullet and they may not be active at the surface but three to four "flashes" of submerged bait in the immediate area should be a good sign.

Don't forget those polarized glasses. Fishermen get the idea that they only need good polarized lens to protect their eyes from glaring sun but that's not true. We need them just as much on overcast days in winter to find bait and also to see the fish we're going to catch.

On a really cold morning you might wait until around 10:00 AM to leave the dock and then fish until dark to take advantage of the warming afternoon sun. After the sun has been out a while, the surface temperatures will heat up a bit allowing the fish to become more aggressive. When fishing for that big girl, understand you're not after limits and you may only get a handful of bites during a full day of fishing. That's normal for a cold day in February. I have also seen February temps in the middle 70° range when the fish went crazy. We will just need to wait and see what 2012 has in store.

My bait selection will not change that much from last month: MirrOlures, original Corkys, and those awesome Floating Fat Boys. You can bet I'll also be packing my trusty Bass Assassins and the Eddie Douglas Broken Back Special. Just remember to be patient and fish slowly. See ya on the water.