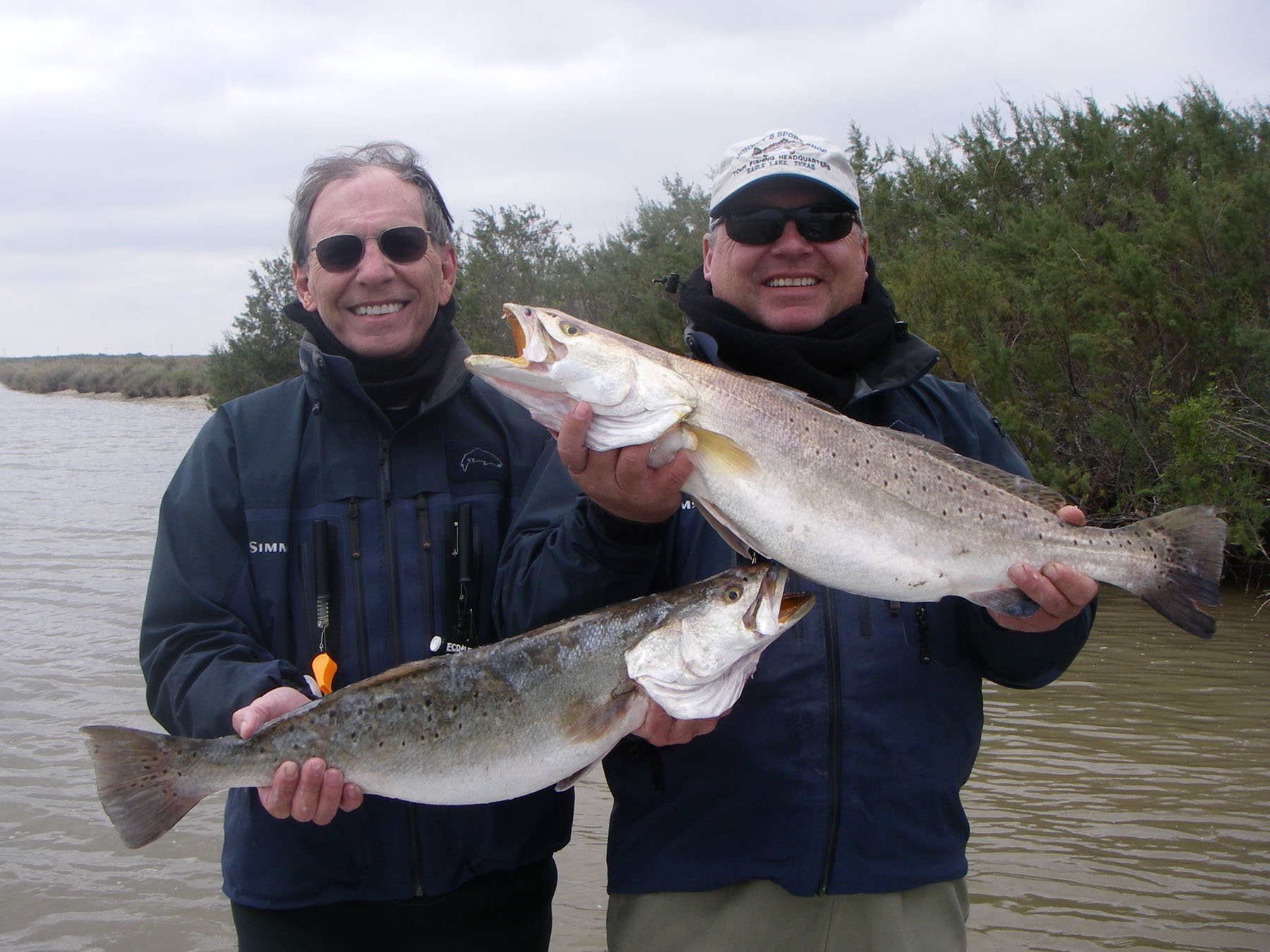 Larry Gerdes with a 27 inch trout and Ralph Aulds with a 29 incher from East Matagorda Bay.
Happy New Year! Already 2008, now that's hard to believe. It seems only a few years ago that I was carrying a .22 single shot in one hand and a red Ambassador pearl handled reel on a Shakespeare Wonder Rod in the other while jumping from pond to pond, shooting squirrels and rabbits along with catching bass on Hula Poppers and Lucky-13's. That was the life at the age of eight on a farm in Nelsonville, Texas. There were no POSTED or KEEP OUT signs because back then the farmers and ranchers weren't opposed to a youngster spending time harvesting their lakes and game. Those days are over with and only memories of the past remain. I can't turn back the hands of time or relive those peaceful days so I'll be content to be true to my roots and never forget where I came from.

January is usually a frigid month and we can almost always expect a big cold front during the Houston Boat Show. You'll see me at the show again this year with some big trout mounts from previous years on display. My plan is to do some fishing in January but, of course, that will depend on the conditions. I will be having a small surgery on my left shoulder and you may see me in a sling at the show so don't be surprised. It won't keep me down for long though and with a little R&R I'll be good as new.

Last year in January we were able to catch some quality trout in East Matagorda Bay but given the cold water conditions expect the trout eating habits to taper off and then become like vacuum cleaners when they finish their hunger strike. Make sure to slow down your presentation of any lure you are using. Mud and shell in knee deep to waist deep water will be ideal settings with focus on finger mullet if you can find them. Remember this, fish have to eat to survive and they will be around mullet. Drifting the middle of the bay over scattered shell while checking out jumping mullet and looking for slicks or streaky clear and off-colored water has paid off in past years. If you decide to drift be sure to make long drifts sometimes up to 3/4 or even a full mile if the wind direction will let you stay on the right structure. mile. If you catch 2 or 3 fish in a row be sure to mark it on your GPS and come back over the same drift.

Over in West Matagorda Bay, I'm sure the reds will be around Oil Field Cut, Cotton's, Green's, and the Middle Grounds. On a low tide fish the sandbars and guts. You might even be able to sight-cast to some of them and if lucky could possibly catch a monster trout. This is not uncommon as many fishermen while fishing for redfish have lost big trout because they were not expecting them to be in the mix of reds they had been pulling in. So when that drag starts to sing and your rod is bent over, it could be a huge trout so implant that in your noggin because it could be an element in landing a trout of a lifetime.

My baits for January won't change all that much with pink and pearl chartreuse gold-sided Corkies, 51 and 52 series Mirrolures in TTR-CH, TTR-808, and TTR-28. Saltwater Assassins to pick from can include morning glory, roach, chicken on a chain, 10w40, and chicken bone. Slurp Assassins in drunk monkey and good penny will also be prime picks. Another bait that I also throw a lot is the Eddie Douglas Broken Back, a very good winter bait for big trout.

See you at the Houston Boat Show and until next time God Bless.