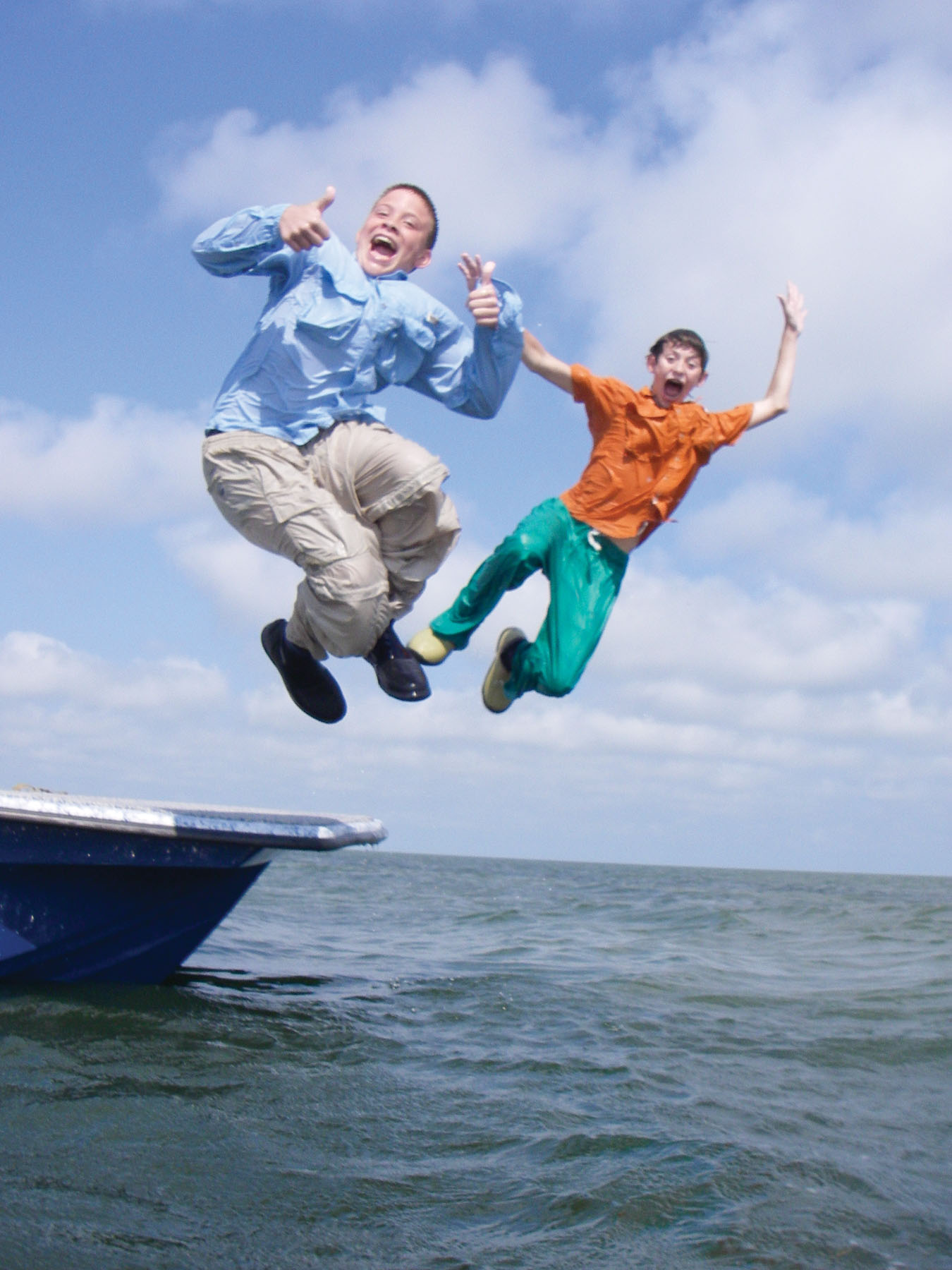 Trey Heath and Jake Ruby decided to take a break from fishing and do a few cannonballs.

Here it is the end of May - Memorial Weekend - with winds still blowing 28+ gusting to 33 mph - near gale force. This has been the scenario for the past couple of months and for this fishing guide it is getting very old. I've actually had to rebook one of my clients four different times due to conditions. Seems like a weather pattern from the dark side. Lets see what July brings... unpredictable as it may appear.

Trying to fish East Matagorda Bay has been somewhat challenging to say the least. Despite muddied waters, fishermen using hop-a-matics under a popping cork have been averaging between eight and twenty trout per day, and occasionally with a few scattered reds. Wading the reefs has been pretty much a no-go because of the dirty water and wind.

On the other hand, West Matagorda Bay has been more accommodating. Wading sand bars and grassbeds on the south shoreline, even with the wind screaming, has been a godsend. We have seen good catches of trout 18-25 on topwaters and Bass Assassins.

Taking a telescopic lens look at July at this point may be a futile effort given the weather patterns of the past several months. I feel like chunking all my records out the window right now because they haven't really been much help due to the unpredictability of the winds. Normally in July, I'm wading reefs over in East Matty. Usually I will get out there pretty early to beat the heat and back in by say 1:00 pm. Sometimes, I'll leave the dock at 4:00-4:30. If the winds are light I may even try to do a little night fishing. MirrOlure She Dogs and Pups along with Bass Assassins will fit the bill most days.

Chances are we may even drift out in the middle of East Bay over scattered shell. In the past, we have caught most of our July trout in East Bay via the drift method in the middle of the day over shell. I hardly ever wade the shorelines unless we are looking to catch reds. Trout seem to favor the deeper, cooler water during July so my primary plan of attack is adjusted accordingly.

Over in West Bay, fishing the sand bars and grassbeds has been relatively productive all through spring and early summer and I expect it will remain so during July. Also, keeping with that deeper-cooler water logic, don't overlook the well pads out in the middle of the bay. Places like Shell Island, Twin Island, Mad Island Cut, and even Half-Moon Reef should pay off. Might get lucky and even catch a tripletail fishing the pads in West Bay.

Perhaps the cards will soon come our way and the surf will get right. When and if this happens, there's absolutely nothing in this area that can match it this time of year. I recommend the same baits there as you would use in the bay She Dogs, Super Spooks, Skitter Walks, and Bass Assassins. I personally like the She Dogs in the surf because of the extra-loud rattle. By the way, MirrOlure is coming out with the She Dog and She Pup in the Okie color. Can't wait to get some I'm thinking it is going to be a great bait.

One more thing before I sign off; my hat is off to Academy Sports & Outdoors. A friend of mine gave me two H20-Xpress reels to try. I was a little skeptical at first because of the $50 price tag but thought I'd give them a try as he reported good service out of them. After putting them through the test, bottom line is best bang for the buck I have ever found. I've been using one for three months now through thick and thin and it hasn't missed a lick. For the price of $50 you just can't go wrong. The fact that it is light-weight, has a smooth drag, and can be thrown a country mile will definitely keep my attention. Great job Academy!