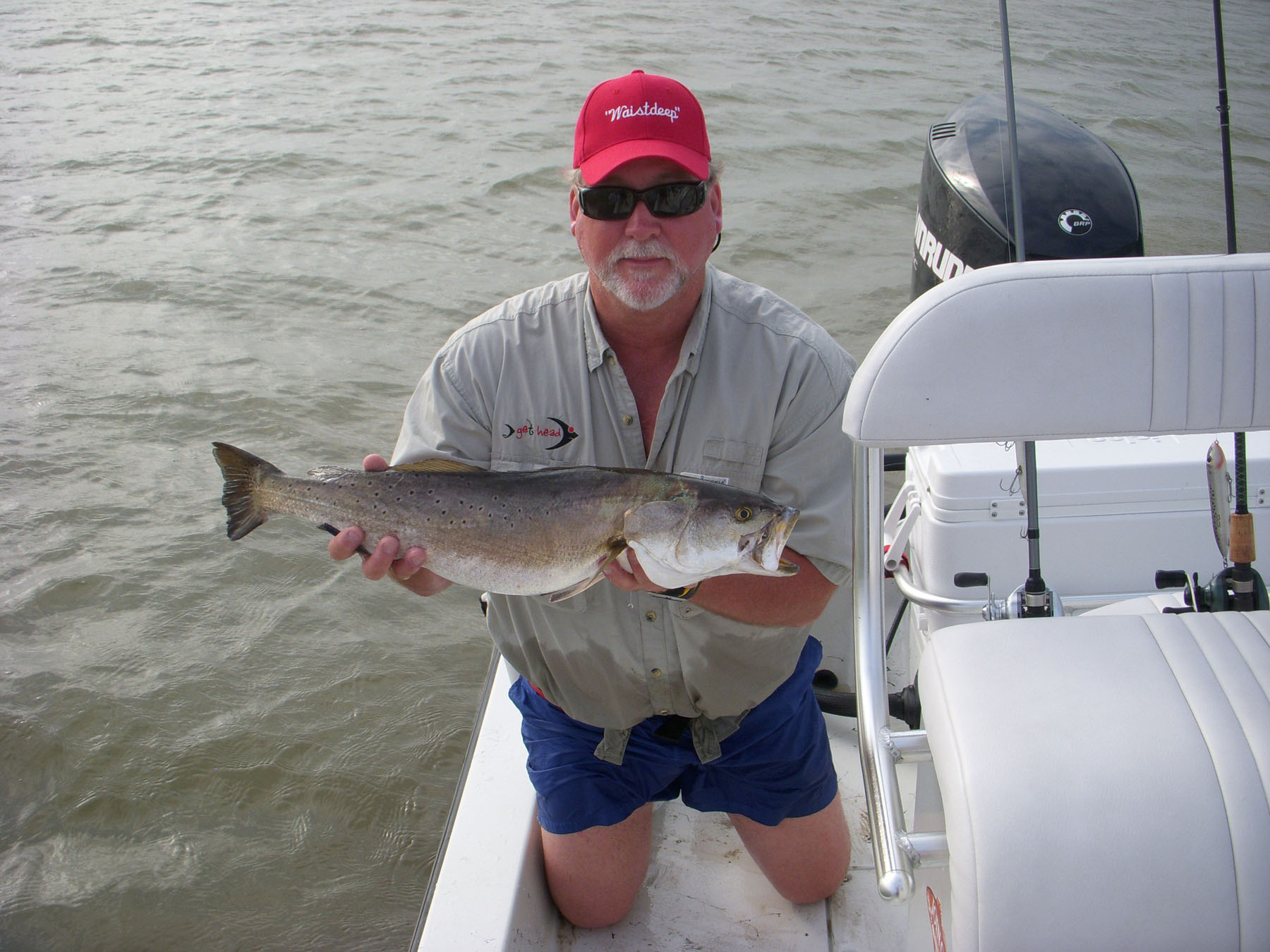 Mike Comer; Brown Cedar Flats in East Matagorda Bay, May 1, 2009.
June has sailed in and hopefully will bring cooperating winds. I don't know about you but I have just about had it with these schizophrenic winds the past couple of months. In April, they frequently blew in excess of 30 mph and from every direction on the compass. Our bays looked like muddy duck ponds minus the ducks. May was a wee better requiring us to fish mostly dirty water while throwing big topwaters and Bass Assassins under Rattlin' Corks to do any good. I believe these have worked due to the added bonus of the noise. My wife can tell you, boy can she ever, I had to cancel more trips in April than ever trying to do the right thing. It's tough when clients have been waiting to go fishing and you have to give them a negative report. I've always said that honesty is the best policy even though my back pocket has felt the pinch. Talking about fishing is almost like predicting the weather because you base your thoughts and decisions on previous records and circumstances with the end result oftentimes resembling a toss of the coin. What June will actually bring – your guess is as good as mine. If I had to look at the past two months to figure it out, I'd be looking for that coin.

For the most part, I'll be heading toward East Matagorda Bay come June while sticking to shell reefs and drifting scattered shell out in the middle of the bay. Bass Assassins and a few topwaters here and there will likely be the plan. Jumping shrimp, mullet, and shad will be my green light indicators for fishing stops. Since I'm not much for crowds, some days could see me heading over to West Matagorda Bay checking out sandbars and grassbeds. Oyster Lake will be destination when redfish are in the picture. You know if the surf turns flat and green I'll be there.

And then they camethe big sharks finally showed up in West Matagorda Bay as April phased out. Those 4-6 ft bulls and black tips shredded many a stringer and chomped down a lot of fish to boot. If you failed to load your catch in a hard, floating container, you probably know what I'm talking about. I experienced one of those delightful fellows one day knocking my five gallon floating bucket all over the place. It was a sight to see and the same thing happens every year. For the most part, these bullies will be gone soon but wise fishermen will continue to use some kind of floating device because a big shark can show up out of the clear blue at any point and time over in West Matagorda Bay.

Tripletail should be showing as well in June as these fish normally show up the same time as the sharks. In the past, I've caught a lot of tripletail in early May, winds allowing. Here again, June should be a good month for fishing tripletail if the winds don't get us.

Back in the late 1990's and early 2000's, it was fairly common to catch anywhere from four to ten trout over 25-inches with several pushing 27-28 inches. On some days you would get on a big school of trout and it was nonstop catching trout over 25 inches and a few in the 30-32 inch class fish were not uncommon. In the fall, October-November, fishing the birds in East Matagorda Bay was awesome. We caught trout from 20-30 inches under birds with most of these fish 20-24 inches. Occasionally, you would catch a monster 28-30 incher. Ask any guide that fished during this time and they will tell you the same thing.

Well, all of our croaker guides are in full swing again and catching limits every day. Our fishery is not the same as it was just a few years back due to fishing pressure from live baiters and artificial chunkers. It really doesn't make a difference what you throw. So what do we do? Look at Port Mansfield. Just a few years ago you had trouble finding keeper trout down there. They were forced to do something so TPWD went to a 5 fish limit on trout and I'm here to tell you they are catching some real good fish now.

There will be people out there that might not like my thoughts on the issue but I'm going to speak them anyway. To keep our fishery in good shapeJust Keep Five! Let that sink in and don't overreact because it is the most sensible plan in my opinion. You probably never thought you would hear me say it.