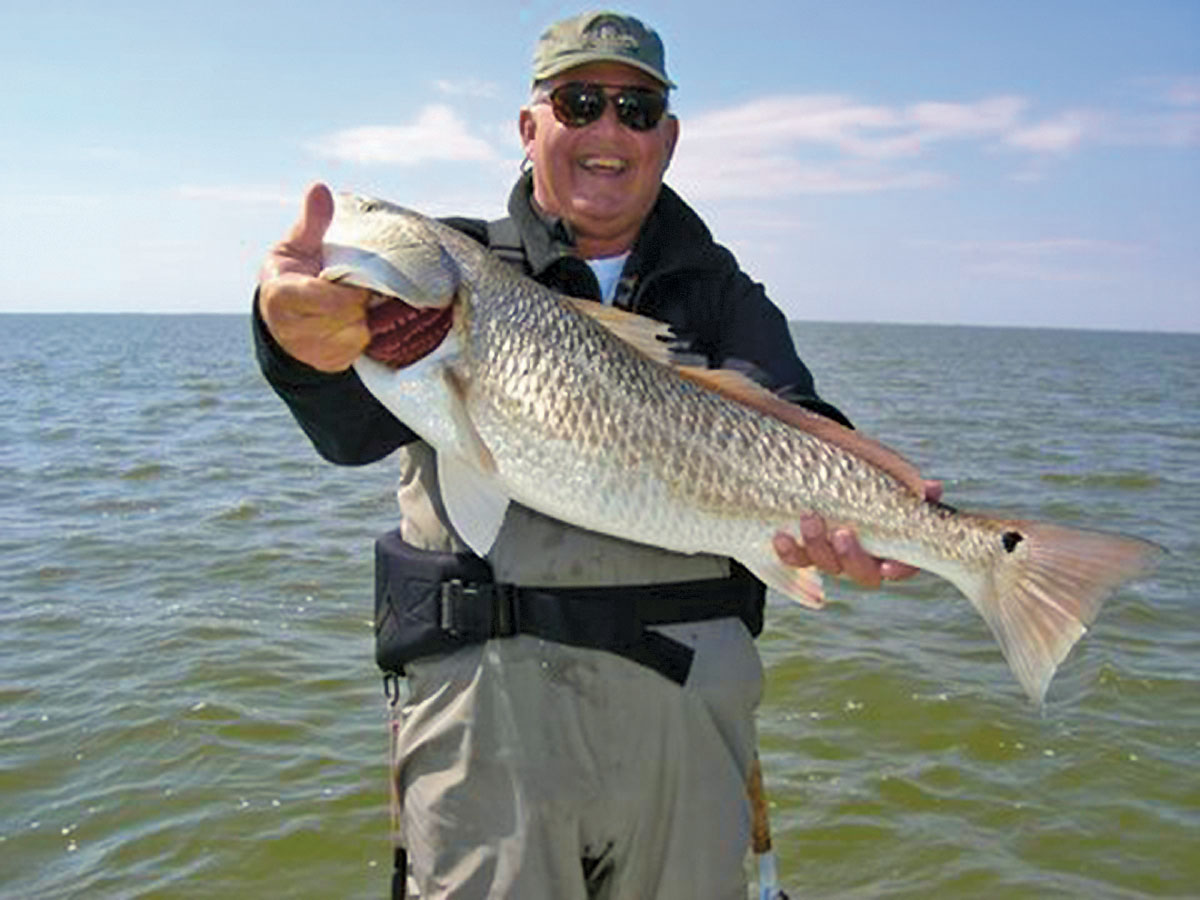 Will Ohmstede catching a 31” redfish on a Bass Assassin while drifting East Matagorda Bay.
A flip of the coin is what it seems sometimes; trying to predict what next month's fishing scene is going to be here in the Matagorda Bay System. I know that this difficulty exists most everywhere so let me just say that February proved quite successful for most of our diehard fishermen. As the water temperature continues to rise, my best guess is that we'll see even better fishing during March.

With some 70 degree weather finally coming our way during the first week in February we saw great catches pulled out of East Matagorda Bay. Water temperature from 42-55 degrees helped in setting the scenario for these solid 16-24 inchers to congregate where we could get on them. If this mild weather pattern continues through March we could be in for one of the best fishing months we've seen in years. On the other hand if the tables turn and we see a predominantly cold and windy trend, you might want to look for another way to enjoy your extra time. We'll just have to wait and see what's in store.

While you're doing your waiting and seeing, don't forget to maintain that high-dollar fishing boat. Have your engine checked out by your nearest dealer as well as your trailer's wheel bearings and do not forget about the tires. There's nothing more frustrating than having an otherwise well-planned trip with long awaited and near perfect fishing conditions going to waste because you are stuck at the dock with engine problems or because you're stuck on the side of the road with trailer trouble. Simple gear checks and timely preventive maintenance can eliminate these unpleasant complications.

By the way, I practice what I preach and my boat has been thoroughly checked out and overhauled, as well as, my trailer and tires. Ouch, not cheap but unavoidable. I've found that it makes my life a little easier down the road.

Now with my boat and gear ready to go I'm headed over to East Matagorda Bay to try out the near same tactics I used in February to see if they'll still work for March. Remember the water temperature will continue to be somewhat cold early in the month so you'll need to fish slowly. As the month winds down and our water temperature rises you'll be able to up your retrieve a little faster.

Since we'll start out the month on a cooler note, Corkies, Mirrolures, and Bass Assassins will be our best bet. If 3 to 4 days of sunshine wind up on our front porch, expect our water temperature to rise a bit and maybe we can throw some topwaters for that big bite. FYI, Bass Assassins came out with a new bait called the Slurp and it stinks, in a good way of course. You can find it in the Shrimp and 5 inch Sea Shad varieties. I haven't had a chance to use them yet but Cliff Webb and his clients down in Baffin Bay are doing well with them.

While out in East Matagorda Bay you'll need to look for your fish in mud and scattered shell in places like Brown Cedar Flats, Oyster Farm, and Kain Cove to mention a few if you are wading. Drifters can try in the middle of the bay from Half Moon Reef on the east end to the south shoreline. Also drifting on the west end by St. Mary's, and out in front of Chinquapin; all the exposed reefs on the north shoreline could pay off. Your best bet is to try and find some jumping mullet or maybe sitting birds but not ducks. Look for seagulls or diving pelicans. Diving pelicans means baitfish, which in turn means gamefish!

I receive lots of questions regarding the tides in East Matagorda Bay, and let me tell you, predicting them is not easy. It has taken me many fishing excursions to reach an understanding of how the tides within this bay system work. Lacking a direct connection to the Gulf of Mexico, East Matagorda Bay does not have tidal flow like West Matagorda Bay. On the east end, at Sargent, we have Mitchell's Cut which is not very wide or deep. Some of this flow enters directly into East Matagorda Bay and some goes into the Intracoastal Canal. On the west end, the connection to the gulf is through the mouth of the Colorado River. The mouth of the Colorado is heavily silted and very shallow; so shallow that you can wade across most days when the tides are low. This is a sad thing but we hardly have time for it here, that'll have to come in another chapter. From the mouth of the river to the first cut into East Matagorda Bay, which is called the Gulf Cut, is about 13 miles, and this by way of the Intracoastal. So you don't have a great push and pull of water into East Bay from this source either.

Adding still more confusion and interruption to the natural flow we have the Matagorda Locks on the Intracoastal Canal. If the locks are closed you will get a stronger push into East Bay. On the other side of that, if the locks are open East Bay receives less. Now throw in the barge traffic coming and going and displacing huge amounts of water and it won't take long to figure out that predicting the tide in East Bay can be a real challenge. I have been at the Gulf Cut countless times and seen the tide pouring into the bay. In a matter of minutes the flow would suddenly slow down and come to a halt; then in as few as five to ten minutes it would begin running in again. This my friends happens too many times to count.

As far as predicting tidal times, my best guess is that we are about 45 minutes to 1 hour difference to the Freeport Jetty tides to Mitchell's Cut and maybe 1 hour to 1 hour 15 minutes to the Matagorda Jetties. As I mentioned, I'm just putting my experiences to trial here in making these comments. I'm not sure it is scientifically possible to get it on the money based on all the variables.

Until next time... God Bless the Fishermen,
Capt. Bill