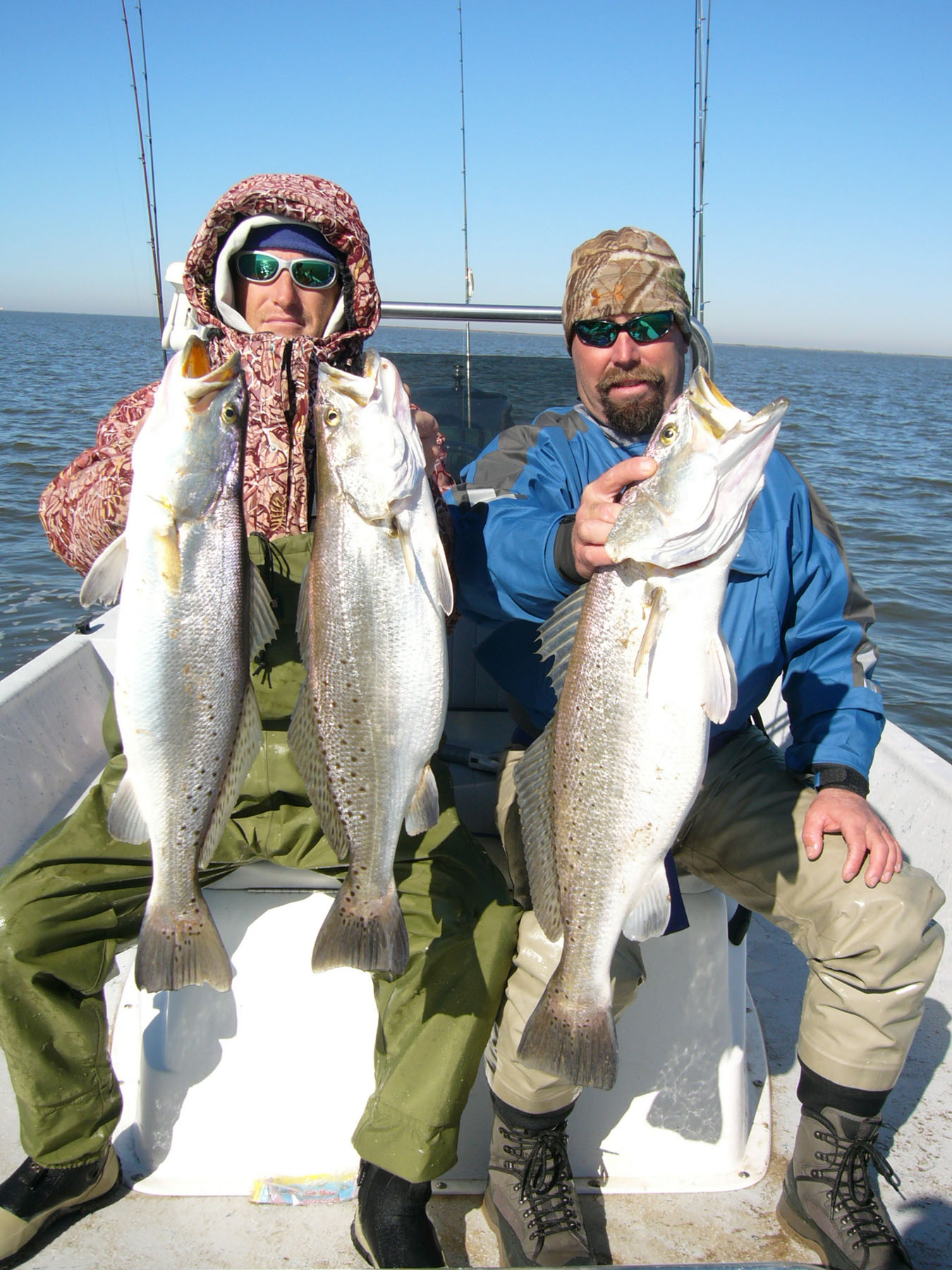 March fishing around Matagorda will remain much the same as we saw in February. Last year Brett Caron, Glenn Hornsby and Aaron Loomis hit it big fishing a cold day with Capt. Bill.
For the most part, March is the kick-off month for fishing in our neck of the woods. Hunting season has pretty much dwindled except for exotics and this is the signal that most outdoorsmen will be bringing saltwater fishing back to center stage. For many anglers, Dave Holder's Houston Fishing Show helps get everything started. Fishermen can view what's new in saltwater for 2008. There's always a ton of tackle, guides from all over the coast, boats, motors, clothing and the seminar room to wet the whistle of those anxious to get back on the water. This is an excellent time of the year to gear up, clean up, and tone up all your fishing paraphernalia.

Like it or not, spring cleaning is a must if you desire to make the most of each day on the water. Take time to go through tackle boxes and replace any rusty hooks and split rings on your lures. Throw away old plastics that have melted in your box or become discolored and lay in a good store of new ones. This is also a good time to send off all reels to a reputable establishment to be cleaned. We have some great service centers and I'd like to list a few of them for you to consider: Johnny's Sport Shop in Eagle Lake, David's Tackle Box in Rosenberg, The Tackle Box in Victoria and Fishing Tackle Unlimited in Houston.

In addition, go through every inch of your boat making sure all latches, screws, flares, and all safety needs are in order. Trailer maintenance is a grand idea as you don't want to get on the road and have a breakdown. Invest time to check your tires, springs, bearings, straps, and last but not least your license plate sticker date. Another important item to look over is your motor especially if you did not winterize. It wouldn't even be a bad idea to haul it in to your dealer and have them look it over. Doing the above may not completely exonerate you from problems as you head to the water but should get you off to a good start.

I'll let you in on a little incident that happened to me several years back before my guiding days. It was during the 1970s and I owned an 18 ft scooter with a 70 hp Mercury. My East and West Matagorda Bay fishing season basically involved the months of April through October. During November through March I hunted ducks, deer, quail, and everything in between. At the time my boat was only about 3 years old and I hadn't experienced any trouble at all so I was fairly confident in my equipment.

A good friend of mine named Ricky from Bellville and I decided to head on down to Matagorda for our first fishing trip of the year, actually it was to be a three day adventure. All the preparations were made and all our tackle, food, drinks, etc., were packed. We hooked onto the boat and off we went. Ricky and I were really excited and with great weather conditions predicted and we joked about who would catch the most and biggest.

I believe we were somewhere between Wallis and East Bernard when I looked back and noticed smoke. At first glance I thought it was my tire but to our dismay it was actually a damaged axle. We hobbled along at a snail's pace and managed to pull into a farmer's house. Luckily he was accommodating and even had a workshop. He allowed us to use his welding equipment and graciously offered to trek into town and buy new bearings for the trailer. Somewhere in the vicinity of 5 or so hours later we were headed out again toward Matagorda.

We were somewhat frustrated but knew we still had plenty of time to get to Green's and Cotton's in West Matagorda Bay to do our floundering that night. We pulled into Matagorda and hurried down to River Bend where we launched the boat and proceeded on our journey. Ricky and I didn't get too far before a buzzer went off and I had to shut down my motor to a crawl. With a hot motor it wasn't too hard to figure the source of the trouble; we had a busted water pump. At least the tide was going out and aiding our frustrated paddling back to the boat ramp. We loaded the boat and headed home.

Our next disappointment came between Bay City and Wharton when we were stopped by a highway patrol officer. I guess the Lord had pity on us that day, the officer was very kind. He had pulled us over because the light on our license plate was out. Knowing that it was working when we left Matagorda, I went back to check. The officer and I began wiggling wires and learned it was only a bad connection. His sharp eye also detected that the license plate had expired.

A little more grace got us through that episode with only a warning ticket, whew! You can only imagine how happy I was to get home that night in one piece. That whole episode taught me a very good lesson about equipment maintenance. I've learned through my many years on the water that a little preventive care is worth its weight in gold.

March fishing around Matagorda should be a fair repeat of February. I've been laid up a bit due to shoulder surgery and a good case of the flu but have been keeping up with fishing patterns. Our trout should continue holding on mud and shell. Hopefully, the last two weeks of March will bring a warming trend but don't get tricked into thinking we've seen the end of cold weather. We're sure to see a few more cold fronts. Pick your times to fish before and after the last of these cold fronts and you should be better off. Also the bite should be best from midday to dark because of the water temperature. Allowing the sun to warm up water surface temperatures and activate the bait could pay off.

Choice baits such as Bass Assassins, Mirrolures, and Corkies will remain the hot picks. In West Matagorda Bay the glass minnows should begin showing in the usual places. If I remember correctly last year they began to show up about the last week of March along with a few big bull sharks. Best tactics for fishing West Bay include incoming tides, shoreline guts, and sand bars. On a low tide the reds should be found in greatest number in the shallow guts. Until next time - God Bless; and maintain that equipment!