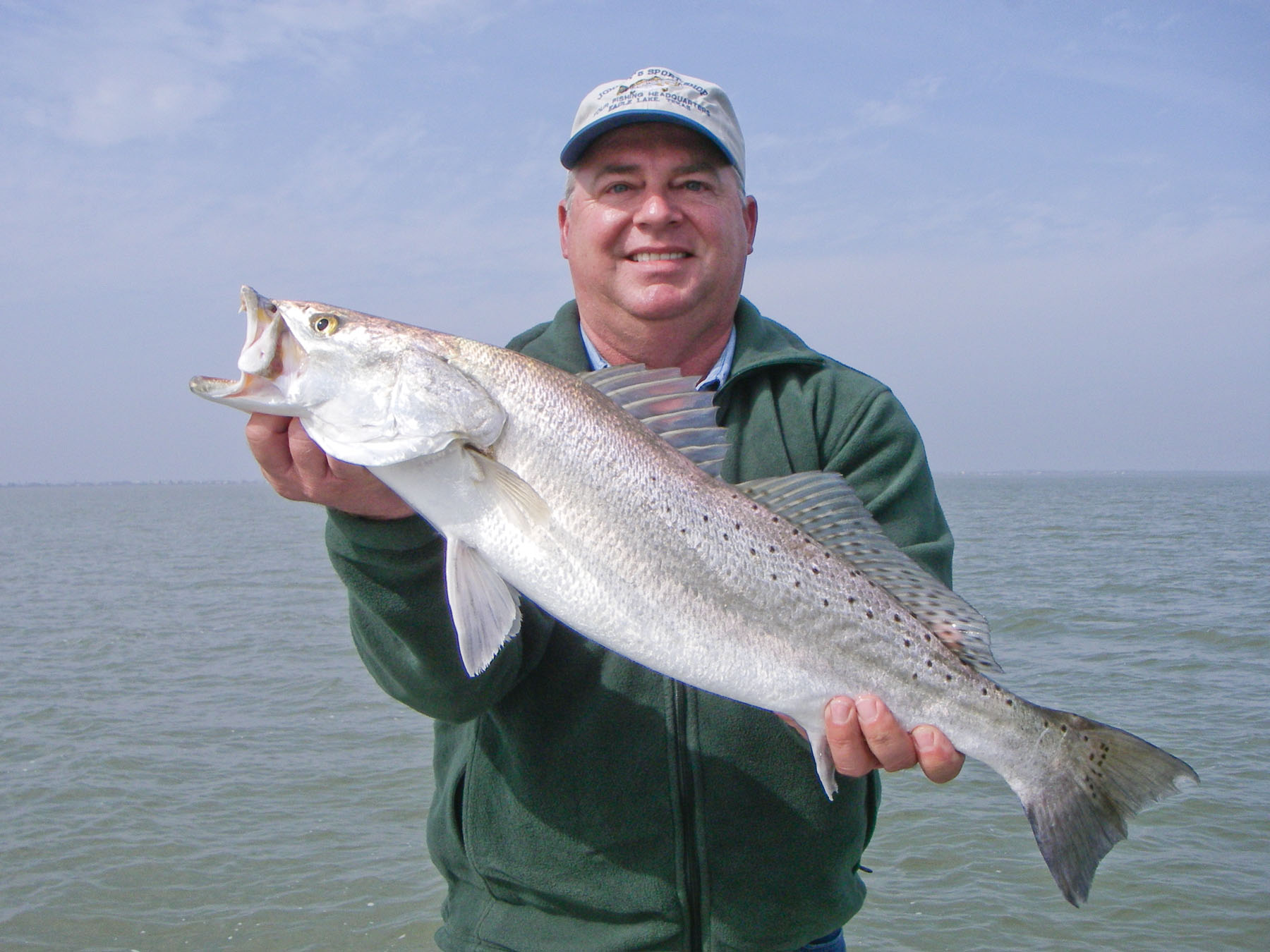 Our 2012 fishing season started out with a bang! January was a great month with a lot of 3-5 lb trout caught in East Matagorda Bay along with a few 27-29 inchers caught and released. Warmer than usual temperatures were noted leaving questions as to what the rest of February and March will look like. In fact, East Bay water temperatures were documented on January 24 as pushing toward 75° which is awfully warm for this time of year. Since we write our articles to print a month ahead of time, it can be a little tricky predicting upcoming fishing patterns. If, in fact, the warmer trend continues, March should be extremely good.

East Matagorda Bay's water clarity has been almost too clear in most cases. As a matter of fact, I don't remember it ever being this clear. We have been trying to find dirty, streaky water to fish out in the middle of the bay. Along that same note, not as many fish have been caught wading because of the clear water; however, there have been some big mamas brought in using MirrOlures and Corkys by the guys that were there at the right time. For the most part, fishing over scattered shell with a lot of bait fish in the area has proven to be the best case scenario for catching fish.

Hopefully, March will allow us to wade fish the shorelines and reefs, all of this will depend on water clarity. If you happen to be wading chest deep and can see your feet, more than likely you're not going to catch anything except a few reds. March could be cold and windy, so we'll have to follow the weather to plan our fishing trips. If, by chance, this is the case, try to fish 2-3 days before a cold front hits the coastline. If you choose to wade fish, look for mud with a little shell and plan to be close to some deeper water in the area. Wading reefs will pay off as well. Drifters will want to be over scattered shell in 4-6 ft of streaky, off-colored water when it can be found. It will be very helpful to have an abundance of mullet around, as always.

I will be using 52M MirrOlures in the 808, Catch 2000 in the 808, an assortment of Corkys, and of course my trusty old Eddie Douglas Broken Back Specials. As far as Bass Assassins, you might try Hot Chicken, Chicken-on-a-Chain, Plum, Woodpecker, Chandelier Isle, and the Panhandle Moon all in the 5-in shad. Also, Bass Assassins has come out with something called the Armed Assassin. I haven't seen one yet but have heard it works and there will be one displayed in the Bass Assassin booth at the 37th Annual Houston Fishing Show, George R. Brown Convention Center, February 29th-March 4th. They have also come out with a new chicken 5-inch shad called the Slammin Chicken and we will have some of these at the show, as well. With the upcoming fishing show and spring breakers, March looks to be a very busy month.