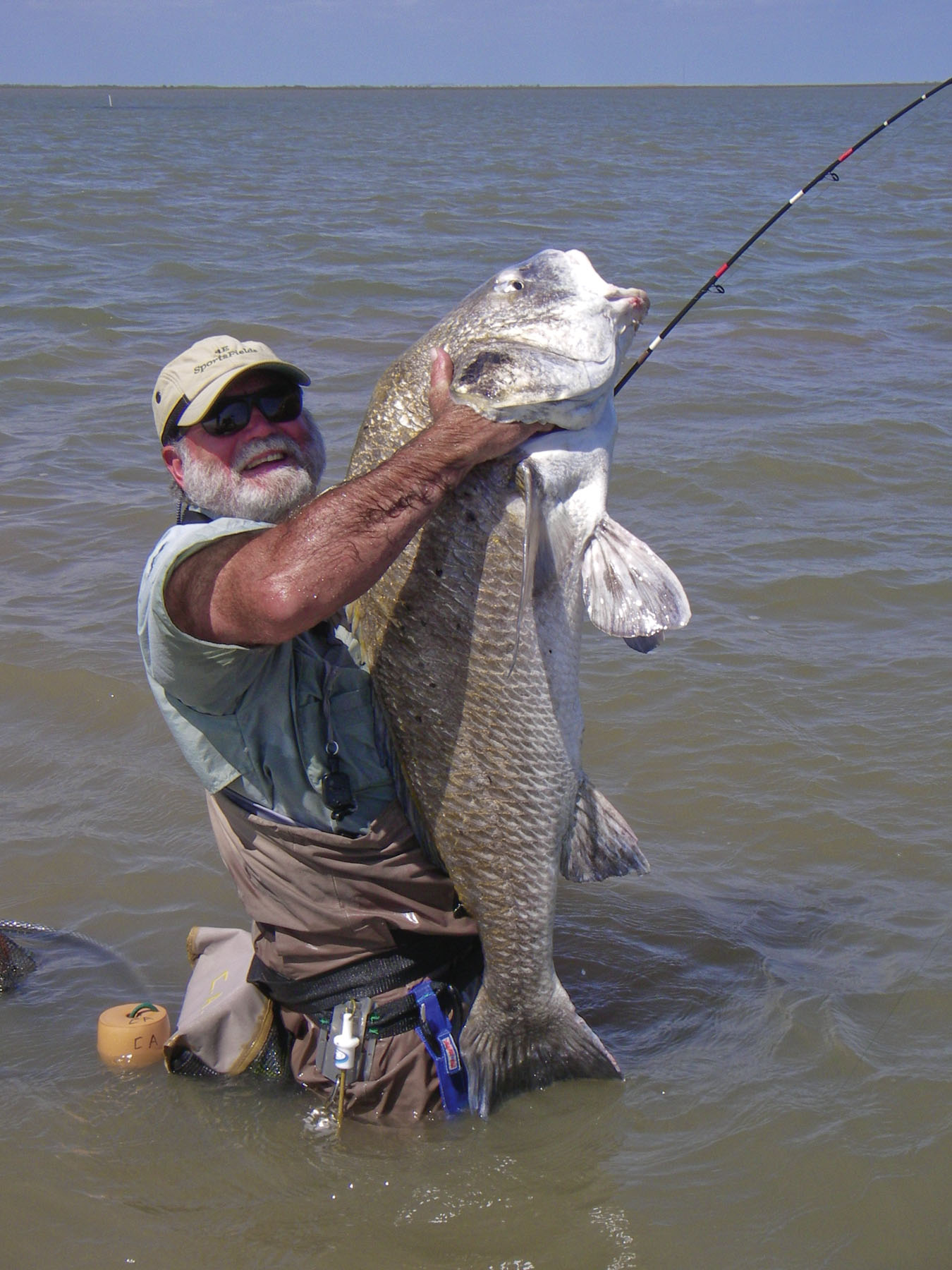 Charles Roberts; 40-45 lb. black drum (estimated) caught and released - West Matagorda Bay April 06 2011 - Bass Assassin.
April showers bring May flowers, and as far as fishing goes we should see some seasonal beauty there as well. We'll find our fish becoming more aggressive along with the rising water temperatures enabling us to wade wet. What a relief not having to wear waders. I'm sure a lot of fishermen, like myself, found some April afternoons when wet wading was comfortable but the waders were still needed most mornings. Even with cooler morning temperatures in the first ten days of the month, April has been giving us good fishing in both East and West Matagorda Bays.

An abundance of trout and reds have been caught recently by anglers drifting the middle of East Matagorda with Bass Assassins rigged under rattling corks. An equal amount of fish hit the fish cleaning table for waders working the shallower mid-bay reefs. Over in West Matagorda Bay, the glass minnows began to show along the south shoreline about the 10th of April and as always fishing the incoming tide has been paying off. Most all have been solid fish in the sixteen to eighteen inch range and there have been lots of reds running those same shorelines.

May will find me fishing both East and West bays depending on the conditions. I'll try to stay in East as much as possible but if it starts getting crowded or the wind becomes a factor I'll run over to West Bay and it won't take me long in my new twenty-five foot Dargel HDX Cat. I am very impressed with the way this boat takes rough water while at the same time able to run in one foot, plenty skinny for my wading purposes. I applaud Dargel for constructing a boat that has a great ride and can also run shallow. Cleve Ford, owner of Dargel Boats, did his homework. A lot of engineering went into the hull design and it has performed very well for me so far.

Hitting the peak of the action on West Bay's south shoreline usually means being there on incoming tide. When focusing on trout I'll be wading the sandbars and deeper grass beds. Your redfish will be found in tight, closer to the shorelines.

If topwaters are your cup of tea, May is probably one of the best months of the year. It's a lot of fun seeing them explode on a lure but you need to be extra careful while handling a thrashing fish. Too many times I've watched smiles turn to frowns. One quick headshake is all it takes to bring tears to even a grown man's eyes. I witness this very same routine every year as I've had a lot of practice pulling hooks out of fishermen's hands and other places I'll not mention. I became a guinea pig for my current hook removal method while fishing one morning when suddenly a Corky slammed into my hand. Capt. Jimmy West from Galveston came to the rescue and showed me how to use a strong piece of fishing line to remove the hook with less pain than other methods. I'm not going to lie and say that Jimmy's procedure is painless but it works for me and I have since removed countless hooks from others.

Fishing topwaters effectively requires lots of patience and expertise that comes with practice. One of the greatest reasons few truly master it is because they can't stand watching their buddies land fish on other lures while they are figuring out the retrieve for the day. Some days the trout will want a fast mover and some days they'll hit it on the pause. Other days they will prefer it slow and steady. You have to be willing to experiment to get good at it. On windy days I usually go with a She Dog or full-size Spook. Calmer days find me throwing the MirrOlure She Pup, Spook Jr., or Skitter Walk. Each one of these baits has its own rattle tone.

When you finally hit pay dirt and hook your first fish all the rest should come easy. Personally I like bone colored lures and here lately I've been doing well with the Heddon One Knocker in Okie shad. I often change out the rear hooks and replace them with ones dressed in chartreuse and white feathers. These dressed hooks work well equally well on Corkys. I know it may sound trivial but sometimes it's the small details that provide the edge you need.