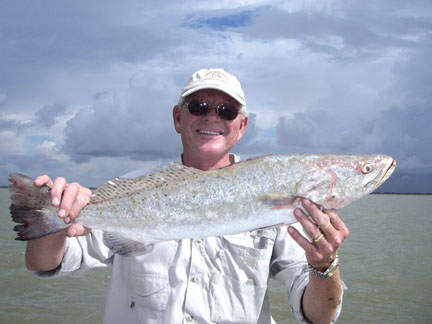 Joe Mingus caught this 28
Projecting fishing trends can be somewhat challenging and quite often risky business, especially when Mother Nature starts throwing curve balls. However, history has a habit of repeating itself.  With that said, my records and tenure as a fishing guide play a huge role in predicting upcoming fishing patterns.

For hardware fishermen, keeper trout were few and far between during September and the early days of October. Actually, this period was one of the slowest I have seen and I was certainly thankful for the numbers of redfish we caught. Croaker guides, as would be expected, managed to bring in daily limits with excellent big trout catches during most of September.

The combination of equinox tides and a low pressure system out of the gulf raised our water level nearly a foot and a half and this always changes the fishing patterns. As I said above, trout action has been slow and I’m hoping our fish have scattered and are up in the marshes.  We will soon know the status of our trout fishery when the tides drop to normal.  A drop in water level of this magnitude always flushes a lot of shrimp and baitfish from marshes and the trout should be stacked in the marsh bayous and drains. Time will tell.

We should see a lot of mid-bay bird activity during November as the shrimp make their way to the Gulf. Reds have been plentiful in back lakes along with a few keeper trout and I expect this will hold until cold weather and falling tides run them back to the bays later in the month. Topwaters and the Eddie Douglas Broken Back proved effective for redfish and also big trout towards the end of September.  I personally caught and released two thirty inch trout.

With the recent lack of rainfall, the Colorado River has been providing some opportunity especially for those who enjoy fishing under lights.  Lots of small trout and a few keepers along with decent numbers of keeper reds have been common.  Live and cut bait has been the ticket for bull reds along with a few slot reds for those fishing the Matagorda Jetties.  Decent numbers of solid trout have also hit the fish cleaning table from that area.

Historically, November has always provided some of our best fishing. Drifting under birds along with some excellent Colorado River fishing is the game plan.  Of course, you can rule out the river should we receive an abundance of rain.  Personally, a 9-10 inch rainfall would be just fine for me after experiencing a long-term drought.  We are way behind schedule here with only fifteen and a half inches since December 2008.

When drift fishing, you may want to consider keeping a rod loaded with a topwater and another with a 1/4 or 3/8 ounce lead head jig and soft plastic.  When the action gets rolling, the topwater can be a lot of fun and will sometimes produce the biggest trout when worked along the edges of the activity.  The soft plastic is always a good producer and the heavier jigs will often be helpful when trying to reach the better fish.  Be a good sport and respect others working the birds.

For November lure selection, this is the month when the fish begin feeding like crazy and getting fat for the winter.  Just about anything you chunk should be effective. Time will reveal the health of our local fisheries and I am hoping for a good report.  I’ll be out there wading mud and shell while throwing top waters, Bass Assassins, Corkies, and the Eddie Douglas Broken Back Special.  Drifting areas with that same mud and shell bottom under birds is another option.

Here’s wishing all a great deer season and a blessed Thanksgiving.  Take care and God Bless.