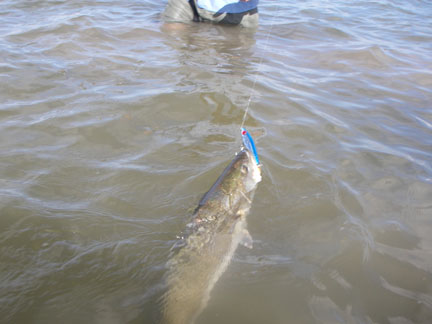 Adrian's 26 1/2
October and November are without question two of the very best months out of the entire year for fishing here in the Matagorda Bay systems, especially if chunking artificials is your cup of tea. The highlights of this fall season are cooler water temperatures, higher tides, and migrating shrimp. I say it every year at this time; those outdoorsmen who opt to hunt rather than going fishing in October and November may well miss out on some of the most outstanding opportunities of the year. With the hunting seasons open in many states including here in Texas, there will be a lot less traffic on the water and that always makes for better fishing. Take your pick, fish or hunt, and if you choose fishing, expect the trout and redfish action in Texas coastal waters to be in full swing.

My favorite bay to fish in the fall season is East Matagorda and, as I previously mentioned, we will have a shrimp migration that will trigger a lot of bird activity. With our higher tides giving this bay system a good flushing, these shrimp will be on the move to the Gulf of Mexico, especially around the full moon. Look for bird activity anywhere in East Bay from the Old Gulf Cut to Boggy Cut and all the way to Drull's Lump as prime areas to find diving gulls working over shrimp that the trout and redfish are pushing to the surface.

Wading the reefs and the south shoreline early in the day is a solid plan. Then long about mid-morning you will find me looking for gull activity in the middle of the bay. Bass Assassins will be my prime baits but I won't overlook topwaters under diving gulls. Topwaters will often produce bigger fish. You'll catch more fish with plastics when the action is hot and heavy simply because most people use treble hooks on their plugs and it takes longer to get two sets of treble hooks out of a fish's mouth compared to a single leadhead.

My advice would be to take the treble hooks off and replace them with single hooks. You'll still catch fish and won't injure them near as much plus you'll also enjoy a safer and quicker release. This setup will give you a quicker casting ability while working gulls and save time. Some fishermen will pass on the birds, hunkering down for the big momma while wading shell and mud. Here are a few points to ponder while fishing for trophy trout.
Trout, at least to me, seem sensitive to bright sunlight; so on a clear, sunny day fish early and late.
Most of my big trout have been caught four days before and after a new or full moon.

Best weather for big trout is an overcast day with drizzle or fog, usually before a frontal passage.
Wear a good pair of polarized sun shades because with lower angles of sunlight the glare is really bad in the fall months.

Action in West Matagorda Bay will be close to the same as East Bay with the exception that trout tend to be smaller here. You'll probably get your limit of 16-17" trout but you will have to work your way through catching a lot of small trout to get there. It can be a lot of fun with some hot spots to check out from the Twin Islands to Shell Island and on down to Mad Island Cut for plenty of bird activity. Some big redfish have been caught right outside the Diversion Channel on those small reefs to the northwest. Oyster Lake and Crab Lake off Intracoastal Canal will be producing trout, flounder, and some big reds as well.

If a big front happens to cross our path and we can't fish the bays, we will retreat to the Diversion Channel and also to the upper Colorado River if it's not fresh. The river has saved us many times from cancelled trips and proven a viable location when forced from the bays.

Like I said earlier, past experience has proven that fall is prime time for fishing and my personal favorite. It may be yours as well so until next time; good fishing and remember to keep those Shimano reels cleaned and oiled. God Bless.