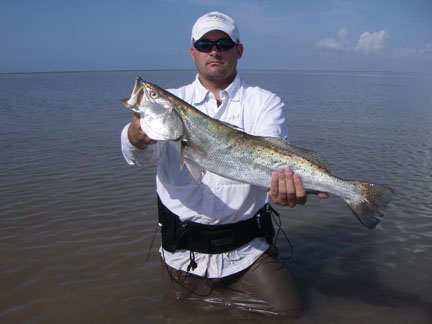 Travis Fleetwood with a 28 1/2
September, in my words, is a transitional month that carries us from summer to fall. I know it may not seem like fall arrives in September because of the continued hot weather but, my reasoning is based on the kickoff of dove season in the north and south zones and also the opening of archery season for deer which comes on September 26 this year. Many outdoorsmen can be found at a hunting lease round about now and I hope I'm not far behind them.

September can be a good month for anglers seeking trout and reds. Over the past few months we have been finding unusually abundant bait in both East and West Matagorda Bays and this will be a good thing as we head into the fall months. Unfortunately, we experienced some extremely low tides the latter part of July and well into August combined with persistent south-southwest winds that hampered our catching. Nonetheless, a good supply of baitfish could be found for those who endured and these are always one of the primary keys for good catching. It's just harder to catch fish in muddy water and that is exactly what we had. I'd rather tell a client upfront what the obstacles will be and rebook for a better day than to struggle the entire day to catch only a few mediocre fish.

Bull tides are not uncommon during September and if we get them they can give our bays a much-needed flush after a long, hot summer. In addition, we could get something tropical that would bring us some much-needed rain. So far, since December 2008, we've only received a mere 13 inches of rain here in Matagorda. A drop in the bucket compared to what is required to maintain a healthy bay system. Our bays are somewhat salty, especially East Matagorda Bay, and I'm praying we will be receiving some in the very near future.

My records indicate we may experience a few cool fronts moving through sometime around the middle to the latter part of September which will trigger shrimp migrations and bird activity in both bay systems. As a rule of thumb, when the teal begin arriving to the coastal marshes, good fishing will follow. Every year can be different and the pattern may vary, but I hang my hat on the teal as a good indicator. Sometimes the entire month of September provides great fishing or perhaps the middle or latter portion may pan out better. Whenever fishing does take off it will normally hold right on through to mid-December. I'm mainly talking here about working the birds in East Matagorda Bay.

Wade fishing should improve steadily as we work our way further into September and wade fishing is a totally different animal compared to working the birds. This time of the year my normal routine may be to wade from daylight until around 10:00 AM or so and then head out to the middle of the bay to start drifting the deep, scattered shell while keeping an eye open for bird activity in the area.

Top picks for baits this go round will be my tried and trusted Bass Assassins' 10W40, Roach, Pumpkinseed, Strawberry & White, and Chicken-on-a-Chain with the 5" Roach coming in at first place for the best plastic bait producer this year. As for topwaters, it's been the pearl, trout, and pink Skitterwalks along with the redfish and trout pattern Super Spooks. These have been best picks and I like to throw in a sprinkling of the floating Corky lures as well.

Both East and West bay systems are in good shape as far as the supply of baitfish and I believe our gamefish are out there too. It's just some bad winds and low tides have hit us this year and it's not just us- it's the same for most bay systems. Positive thinking will always get you over the hump and we'll get over this one and those to come. Let's look for some great fall fishing with awesome catching. Take care and God BlessCapt. Bill