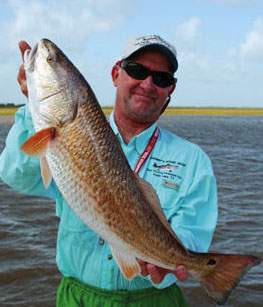 Capt. Bill with a 27-5/8” redfish that weighed 9 lb 12 oz.
With the dog days of summer soon to be behind us, September arrives hot as a firecracker but with the promise of cooler evenings and mornings as the days slide by. The opening of dove season across the north and south zones will put many outdoorsmen on the road to their deer camps to harvest a few of the feathered delicacies and tidy things up in prepare for the coming season. Teal and hummingbirds will be numerous on their migrations, adding to the magnificence of the beginning of the fall season. There will be markedly fewer boats lining up at the launch ramps each morning and diehard saltwater anglers will be able to relax and enjoy less crowded fishing they haven't seen since way last spring.

Rainfall levels have pretty much returned to normal following last year's horrible drought and this generally indicates good fishing and hunting will be headed our way this fall and winter. September has always stuck in my memory as a great fishing month, provided of course we have no hurricanes and the summer heat does not linger too long. If September brings in some particularly cool days, fishing prospects will rise as our shrimp will begin to move again and bird activity will again point the way to solid catches. We normally expect bird activity during October and much of November but I have seen it very good as early as 20 September.

East Matagorda Bay
September will find me hustling all over East Matagorda Bay. Wading should be very productive along both the north and south shorelines and also some of the shallower mid-bay reefs. Drifting the deeper reefs and areas known to hold scattered shell, along with keeping an eye out for slicks and a few birds picking up shrimp every time the trout push them to the surface will be my game plans.
When baitfish and shrimp begin to move, you can expect your gamefish are going to follow. Just because you found them in a certain place yesterday or last week does not mean they will be there in the morning. You have to keep both eyes open for all the signals and be prepared to make adjustments to your game plan if you want to stay on the fish. Signs will be everywhere and some will be subtle such as gulls or pelicans simply resting on the surface (not actively feeding) in the middle of the bay or gulls and terns hovering over shallow water where a school of reds and sometimes trout will herd bait right up against the shore. One thing is certain, if we get good early fall fishing weather, East Matagorda can deliver some mighty exciting fishing.

West Matagorda Bay
Bird activity will also be a possibility over in West Bay. I often make the run to Oyster Lake for reds and a few trout but places like Shell Island and Twin Island might also be good choices. Check out the south shoreline from Cullen Ranch House all the way back to the Diversion Channel keying on active mullet and shrimp as you wade the bayous, guts, and points. If the Colorado River goes on a big rise Oyster Lake will be the best bet. Over the years I have witnessed incredible bird activity in the Diversion Channel during the early fall season when everything comes together.

As far as baits, I will be throwing my favorite She Pups and She Dogs, as well as lots of Bass Assassins. Additionally, the early fall season is when I start to break out the Corkys, now produced by MirrOlure. Many fishermen believe these lures aren't effective until the winter months but I beg to differ with that theory. You could be missing out on some great opportunity by not throwing these baits in September. The pearl chartreuse and chartreuse with gold sides are my personal favorites.

To sum it all up, when the wind wasn't blowing 30+ we enjoyed good catches through late July and thus far in August. Live bait fishermen out-produced those of us chunking lures but that's standard stuff for summertime. Surf activity has been fair to good with the exception of a few shark encounters but we have managed to work around them. Myself, I'm just waiting for cooler weather with hopes for some good fall fishin.

Until next time; Good fishin and God Bless - Capt. Bill