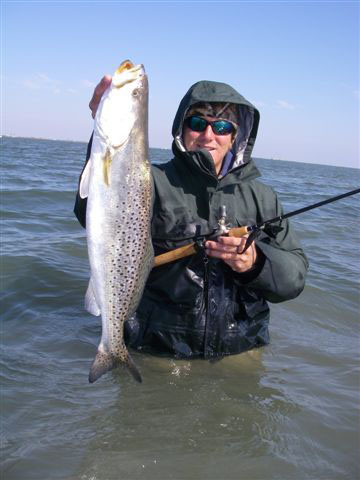 C.R. (Cliff Jr.) Webb with a fat C&R Baffin trophy.
The conditions have been perfect. I've been all over Baffin Bay and the water is clear everywhere. The water temperatures have finally warmed up and hit seventy degrees last week. The top water lure bite has really turned on.

I've been going to new fishing areas and they have been paying off. The trout are coming in; any area that is quiet and uninterrupted is working.

We've had perfect weather. There were only a couple of days all month that we were not able to fish and that is exceptional for this time of year. My clients have all been trophy trout fishermen, wanting to catch that one big trout. The majority have been catch and release.

A lot of fishermen aren't even carrying stringers. There's been days that I haven't had ice for the cooler or have to filet a fish. We just take a picture and release her. I have definitely been in my element, there's nothing better than to catch trout and let them go.

Skeeter Wollam and his son Aaron came down from Palacios. Skeeter's been fishing with me for the past sixteen years. He also invited my son to go with us. We had a heck of a father - son day.

We went south to a spot where I had been catching big trout all week. As soon as we got out of the boat I noticed the bait was really flipping in one small area. We fanned out a little and surrounded the bait. Skeeter gets the first big thump on a Corky. It was his first big trout of the day. It was twenty-eight inches long. We all stayed within fifty yards of each other and caught nine big trout and a couple of bottom feeders, (redfish.) Skeeter was on, he caught five of the nine on that wade and they were all released. I think it was his best day of catching big trout. There's nothing like fishing with family and friends it was a great day on the water.

My good ole fishing buddy Greg Woodard came down along with his nephew, Everett.

Greg has been down many times and he has mastered the finesse of working different lures. He cast a pink Corky and caught a huge trout that weighed eight and one half pounds, she was released. Everett was impressed with what his Uncle Greg could accomplish on an artificial lure.

I was impressed, too.

My son has also had some remarkable days this month. He had a group of wade fishermen and in the group; Mike Walters was doing something right. He caught the two largest trout. One was twenty-nine inches and then he caught another one that was thirty and one half inches. Mike had a memorable day to say the least.

One of the reasons we have such good fishing today is because of the conservation efforts made by Texas Parks and Wildlife back in the 1960's. When my dad, Carl Webb, came to Corpus Christi in 1963 as a game warden, one of the first things he was asked to do was to stop illegal gill netting in Baffin Bay and the Laguna Madre. There were seventy-three active commercial netters. During that time we rarely caught a big trout on rod and reel. Just small schoolies, the size that could swim through the nets. In that first year he removed two hundred and thirty thousand feet of gill net! Texas Parks and Wildlife made a difference back then, and we are seeing the payoff today in the numbers of fish.

Baffin Bay is now experiencing more pressure from more fishermen than ever. We have to realize that it is not an endless supply, we have to appreciate what we have and do our part so there will continue to be fish for years to come.

I expect April to bring more good fishing. The winter was cold but luckily it didn't freeze and kill any fish. All the shorelines will continue to load up with fish and we should get a good number of trout in the land cut.