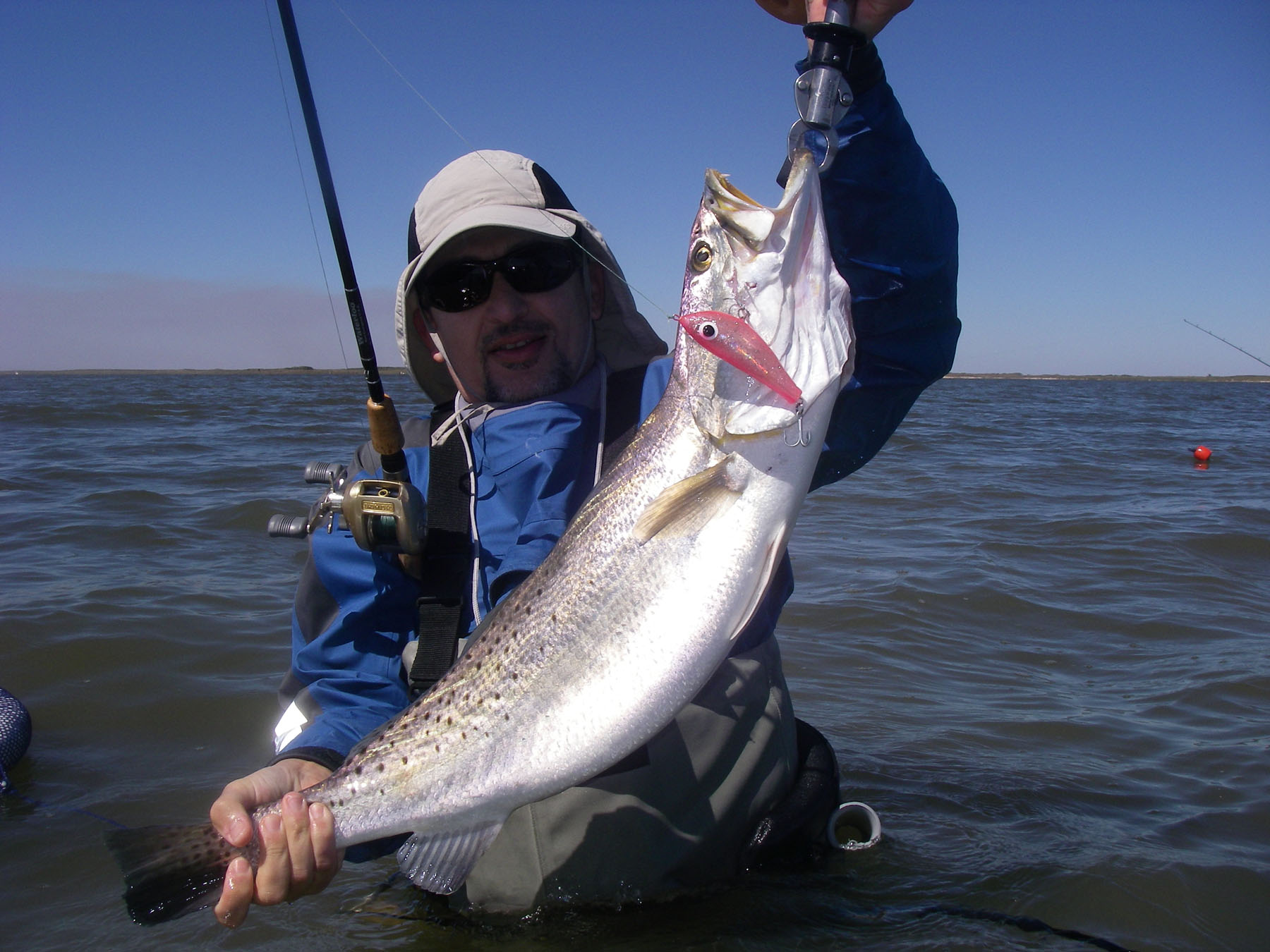 Dr. Mario Perez.
This time of year there is a lot more windy days than there are calm days. The key is to fish the lulls in between the winds switching. As the cold fronts approach, the southeast wind will race in at forty-five mph. Then the winds will switch to the north at forty-five mph. And we hope it blows through and have a day or two before the southeast wind picks up again. That is exactly what happened this week on an incredible trip that we had.

On Monday, we tried to fish and the southeast wind was howling. We just got blown out of the water. By Tuesday morning the wind had switched and a front came in with gale force winds from the north. It was blowing fifty mph all day long. The water was so stirred up the whole Laguna looked like chocolate. I had to cancel fishing for that day. The following day, I had four fishermen come down and they were game to give it a try. Even though I told them that the water was still dirty. I said, hopefully. We can find some protected area with fishable water. The good thing is the cold front had dropped the water temperature down and it should turn the big trout on.

So, on Wednesday morning it was still blowing out of the north at about twenty, not too bad. We headed down south along the east shoreline which is normally clear and it was as muddy as could be. It didn't look too good. But, I had one place in mind and the forecast was for the wind to continue to die down during the day. Sure enough I found a little area of fairly protected shoreline in Baffin Bay. We stepped out of the boat and began wade fishing. At about eight o'clock we had our first good trout, it was about seven pounds. I told the fishermen, "This is looking very good. The wind is starting to lay a bit and the water is getting clearer. There is a lot of bait flipping in here and we've already caught one big trout and there are probably more. I think we are going to do something big." And from about eight-thirty on, we all caught and released big trout for six hours straight. It was unbelievable. We caught a dozen trout that weighed more than seven pounds. Everyone caught a trophy trout and released it. I looked around and tried to take pictures of everybody and three of the guys were hooked up with big fish at the same time. You know it's good when three out of four were fighting a big fish. These fish were coming out of the water and headshaking, making all kinds of noise. The wind calmed to five to ten mph and this really made the aerial displays beautiful. I was truly enjoying watching and taking the pictures.

We were all standing about ten feet apart and Rene Garcia had reeled his Corky in to within ten feet away and was getting ready to bring it up to make another cast when a giant trout ran between Dr. Mario Perez and Rene and crashed the lure right on top of the water and almost jerked the rod out of his hands. The fish threw water all over both of them and peeled out the line. A few minutes later he landed her, I took the picture and she was released.

Dr. Perez caught one about nine and a half pounds and she was more than thirty inches long. I asked if he was going to keep her and he said, " No, I'm looking for ten pounds and I've got one on the wall that is thirty-one inches long. I'm going to turn her loose." I thought that was excellent and he put her back in the water. Then, Pat Alba caught three seven-pounders in a row and one that was more than eight and released them, too. These guys were great! They just kept a few of the smaller trout.

I'm standing in the middle of these guys watching and I threw out and made a long cast with a Fat Boy Corky. I worked it back a few feet and I felt a big thump. I paused for a second and the line got slack and I reeled up the slack and set the hook. This fish came straight up out of the water and started jumping like a tarpon. I knew it was a big fish. It came toward me and I brought the rod tip down and reeled like crazy. Then she stopped and turned and I could see her shoulders. She was more than ten pounds. You just don't see that kind of width from the back very often. The first time she came by me, and I saw there was no way I could grab her with my hand, I played her until she wore herself out. The next time she came by I grabbed her by the base of the tail and turned her over and she froze. Pat was there with his Boga and snapped it on her bottom lip. I had to raise my arm straight and stretch to get her out of the water and the Boga read more than ten pounds. One of the best big trout fights that I've had in a long time.

This was a rare situation when all the big fish decided to eat at once. I think because we had two days where the water was so stirred up that they just didn't eat. Then the cold front dropped the temperature a little and they decided they'd better eat. All the fish we caught were just gorged with mullet and shad. They were regurgitating when we reeled them in it would make a big slick around you. They looked like footballs, where you had to put two hands around them to hold on. I could not believe how heavy these fish were. Life is good, and it doesn't get any better than this. I'm in my element now. I could see them, I could smell them and there were slicks all over the water. This was like the old days. It reminded me of fifteen years ago standing in this same place, when days like this were common. But, I haven't had one like this in a while. I told the guys you just happened to hit that magic day where everything lined up and the big fish were on the feed.

As I'm writing this article on Thursday, the southeast wind is already up to thirty-five again with gusts to fifty mph. It was a short window of opportunity that we had with one calm day between the wind storms. Typically in the springtime, we get used to fishing in the wind. But you sure don't want to miss those days in between. We've still got a good month of fat trout in front of us. With some warmer weather and calmer days the top water lure bite should pick up.