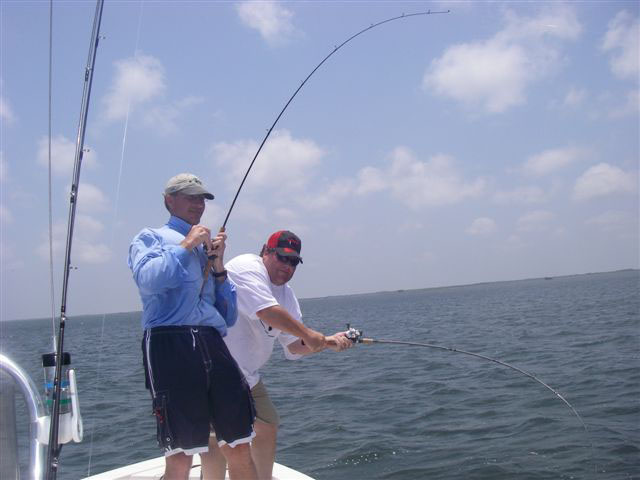 Mike Haring and Robin Shiver with a double hook up.
The trout fishing in the Laguna Madre has slowed down quite a bit. The hotter the weather gets the harder it is to catch trout, especially on artificial lures. The water is off-color and dingy. It's still green but, there's not much visibility. We've had a lot of rain which is pouring freshwater into the bay systems. This is bringing the tides up high and pushing water into all the inlets that are normally dry. For the most part this is healthy for the bays, making it good for the shrimp and crab harvest, but it will scatter the fish and it may take a while for fishing to improve again.


I had a memorable fishing trip with thirteen year old Dylon Martin and his family. This young man had one thing on his mind and that was to catch a big trout, my kind of angler. He was entered in the CCA Star Tournament and hoped to win a college scholarship. I could tell that his father had spent a lot of time fishing with him, his technique was right on and he was attentive to everything I said.

We were both on the bow of the boat, drifting in about two feet of water and I spotted a huge trout, as least thirty-inches long, she was lying in the grass. I pointed her out and Jason reacted perfectly. He didn't get nervous or loose his cool and he made an impressive cast right in front of the trout, but she didn't take the lure. That's when you just shake your head, knowing that you did everything right and it just didn't happen. It didn't faze him though, he worked hard and stuck with it all day and he caught and released dozens of trout but not the one he needed. I know he'll continue trying; he's got the patience that it requires.

Recently, I had the opportunity to try out some new lures with my good friends and sponsors, the owner of Bass Assassin, Robin Shiver and Mike Haring the owner of Mainstream Marketing. They wanted to try out the new scented baits Robin has named the Blurp. The last couple of times when they were here it was springtime and the trout fishing was really good. We had great action catching trout on the scented shrimp baits. Now, it is later in the year and the heat has shut the trout bite down. Luckily, they said that they also like to catch redfish and I felt we could target some reds and do well, especially with the Blurp.

Early that morning I was running down the King Ranch shoreline and got close to a school of redfish, they were spooked and made the water surface ripple. So, I shut down and positioned the boat in casting distance of the school. We cast the Blurp baits in front of the school in the direction they were heading. As soon as the redfish came close enough to the lures they keyed in on the scent and hammered it. On the first try we hooked up on three reds that were all heavy, up to thirteen pounds. We got those aboard and release and then headed out after the school again with the trolling motor. The key was to cast in front of the school and let it sit. If you moved it the reds would spook and they wouldn't hit it. Robin really put the heat on those big reds. He was using my Waterloo Rod, the 6'6" HP Slam Mag with twenty-pound test Power Pro braided line. He's used to horsing in big bass and he had that rod bent double. He said he was impressed with how strong the rods really were.

With the summer heat continuing, look for the fish on the deeper flats along the edge of the Intracoastal Waterway and other channels. On the calm mornings, look for the redfish tailing on the edge of the channels. Work the drop offs with the trolling motor casting toward the edge. Try your topwater lures early in the morning and then as the day heats up switch to the Salt Water Assassin. I like the five-inch Shad and bounce it down the deep edge. Work the channels top to bottom to find out if there are any fish hanging off the edge.