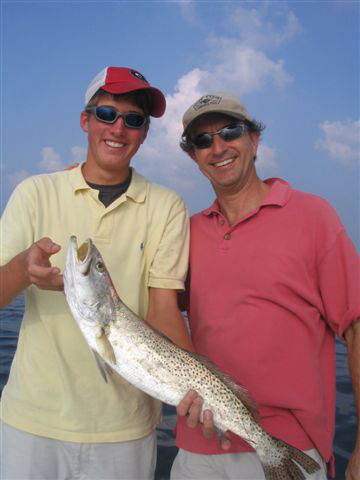 Rob and Ryan Holliday during a good trip with Capt. CR Webb.

These last couple of weeks we've had some cold fronts and the water temperatures are finally starting to drop. The water clarity has been good which helps when using lures. I've seen birds working the south shoreline in Baffin Bay.

I've noticed that the larger the flock of birds the smaller the fish. I'm finding the larger fish up shallow on the shoreline with small groups of birds around them. Say, ten to fifteen birds and some of them sitting in the water. It's real easy to spook these big fish off, so shut down the motor way before you get near the birds and drop the trolling motor down and begin at a very slow pace toward the birds. Keep your drift anchor ready in the boat. When you ease up enough to make the birds fly, position your boat where you can drop the sea anchor and drift right through where the birds were. Make your casts in this area and drift all the way through before you fire up your motor.

This last week one of my good friends, Bryan Kost and his long time friend, Scott Weems from San Antonio came down to fish. The conditions were not that good. We had just had a lot of rain and the tide was extra high with a lot of fresh water runoff. The fish had been spread out everywhere. We had a strong southeast wind, so I decided that we would make the run down to the Land Cut. We worked the edge of the dropoff with the trolling motor and drift anchor; casting toward the shallow edge.

We fished topwater all morning and there was some action, just not a lot of hookups. It was really windy with high atmospheric pressure on us. All during the day we saw a bunch of jackfish just tearing up the water behind us, they were after mullet. These jacks fed constantly and looked to be 15 to 20-pound class as they rolled and exploded on the surface.

Eventually, Bryan and Scott decided they'd like to give the jacks a try and cast right into the frenzy of blow ups. They both hooked up immediately and their lines just started screaming. I pulled the sea anchor and got on the trolling motor; following in the direction they were going, hoping I could keep up and get the fish stopped before they could strip the reels completely bare of line.

I noticed that both of their lines were going the same direction and they were close together. I said, "Hey, these fish are following each other around". Come to find out that the same fish had taken both of the lures. He had eaten both plum chartreuse Bass Assassins. After several minutes of rodeoing we finally got him in and he was a monster. With their curiosity satisfied, Bryan and Scott announced they'd had enough jackfish for the day. We spent the rest of the day targeting some nice trout on top water.

The next day, Mike Black and his son Clayton were onboard. They came down for two days of fishing, which is a good way to do it if you are able. This time of year the weather changes daily and we had a dense fog that morning; the pea soup kind where you can't see anything. You can't tell where the water stops and the sky starts. I finally got down to my destination, about thirty miles down south of Marker 37. When I turned off the motor the fog was thick and it was very calm; like a mirror. I really couldn't see the shoreline, but I could hear it. I headed to it with the trolling motor.

I could hear all the pops and slurps and slaps of fish activity working up the surface, the fish were hungry and feeding. As I continued easing toward the shore, sure enough there were baitfish everywhere. We began by casting topwater lures and bite was immediate; we caught one after the other. The three of us caught over sixty fish, mostly trout in the twenty inch range and redfish that were twenty-eight inches and larger. We cast topwaters out of the boat all day. The fog stayed on us until about 1:00 p.m. and the fishing stayed hot until then. It was one of the best days so far this fall fishing season.

On their second day the weather changed; it was bright and sunny with light winds. We used topwaters early, the fish were blowing up on them, and the action was good. We had a few good hookups, but not like the day before. I'd rather have a foggy day over a sunny day anytime.

At the end of the week a couple of great fishermen came in from Houston. The southeast wind was blowing hard, which is normal before the approaching cold front. I knew it would be challenging; that's what makes it fun. This time of year no two days are the same. We worked hard and I tried every pattern, shallow grass beds, shorelines, deep rocks, shallow rocks and drop offs into channels. After fishing all day we managed to have some decent fish. John did catch a nice twenty-five inch trout. He sent me an email to say thanks for all the hard work and here's what he wrote, "A reminder - it's called fishing, not catching, and we're anglers."

More cold weather is on the way and it's going to improve the fishing as the fish begin their move to the deeper waters. The Intracoastal Waterway always pays off in December. Work the lure a little slower and if it's real cold weather, work it even slower yet. During the months coming up, the trout will begin to gorge to get their winter fat. Soon the trout will be their heaviest of the year. I enjoy winter trout fishing, it is some of the best.