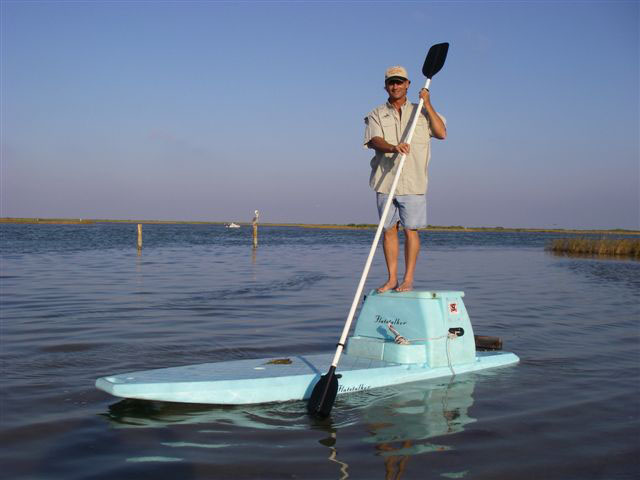 Good friend Roy Sanders on a Flatstalker.
I wish I could report otherwise but trout fishing has been pretty spotty around here; I've only had a few good days. This might be attributable to the amount of freshwater that entered our bays this year and the high tides that remained for such a long time during late summer and well into the fall season. The fish have been scattered. The better fishing has been in the upper Laguna Madre where the water has been fairly clear. The best days came right after the first cold front. It blew in with a strong north wind that lasted for three and a half days and dropped the water temperature fifteen degrees. This sent the fish to the deeper channels and the Intra-Coastal Waterway. This is what we've waited for, the first big front and the good fishing that follows.

It happened to be the second day after the front; Dr. Wayne Laster and I went out and the wind was still blowing about twenty mph, it was overcast and felt pretty cold. The current on the ICW was moving fast. There were birds feeding on the channel and the baitfish were on the move. We fished along the edge of the drop-off throwing Saltwater Assassin's five-inch shad in plum with the chartreuse tail on heavy leadheads. The action was good and we caught several trout. Then about ten or eleven o'clock the sun came out and the wind died a little. The fish moved up in the current on the edge of the channel in about two and a half feet of water and that was our signal to switch to the small Super Spook. We started working the edge and caught trout and several redfish. The first good trout was six pounds and twenty-seven inches long. The next fish I caught was twenty-nine and a great one to photograph but my camera had been sitting for so long that I didn't realize the battery was dead. To be honest I wasn't expecting such a big trout so she was released with no photo being made.

The next day, I had Joe Hoogendoorn, Joe Rodgers Jr. and Joe Rodgers Sr. I call them the three Joes. We did the same thing along the ICW and it was just excellent. We caught good trout that were twenty-three to twenty-five inches along with some reds that were twenty-seven inches long and weighed up to eight pounds. Everything was caught on the same plum and chartreuse Saltwater Assassin shad lure. One of the keys to working this lure in the strong current of the channel is to use the trolling motor and stay close to the edge. Try to move the same speed as the current; make short casts with the quarter-ounce leadhead and throw parallel to the edge rather than across the channel. It also helps to locate small bends and channels that intersect the ICW, places where the current slows down some. Slow down, maybe put the Power Pole down and work these areas well. The fish will gather up in these little eddies waiting to ambush bait moving down the edge. The three Joes were very good at this and had a great day.

I have been covering a lot of water recently from Corpus Christi Bay all the way down south to the Port Mansfield Jetties. The water clarity has been good from Corpus Christi Bay down to Bird Island allowing us to work sand pockets in five to six foot depths. The water color starts to get bad in the Middle Ground and around Baffin Bay it has been poor. I believe the fish are in there I'm just not able to target the structure that I want to because I can't see it. The water gets better at the south end of Yarbrough Pass and into the Land Cut and we have been finding better fishing there. At Port Mansfield the water conditions were beautiful. The channel was alive with fish. We could see baitfish, stingray and drum moving down the edge. Over in the flats there were tailing redfish everywhere. That covers the Laguna Madre.

Now for something new. Longtime friend Roy Sanders has come up with a new tool for sight-fishing that he calls the Flatstalker. It's along the lines of a kayak except, it is flat and stable enough that you can stand on it and pole around and even stand up on the console. The big advantage to me was the low profile. It puts you right in the shallow flats quietly with no splashing or crunching over shell, it also helps to get across soft muddy bottoms without killing yourself. I was amazed how well it poled and the fish don't even know your coming.. With one stroke of the push pole you can easily glide twenty to thirty feet. Drifting with the wind is easy too. When you see a fish you can just dip the paddle, swing it sideways and slow down to make a cast. It lets you reach areas that you normally can't. Some of the back bay sloughs have mud that is hip deep and virtually impossible to wade. The Flatstalker lets you get over the mud and near the shore where there are good grass beds loaded with fish.
The Flatstalker is now available with trolling motors and floundering lights and they are versatile enough for duck hunting, too. It's amazing where it will go and how many new fishing opportunities it can present for you.

There will be more cold fronts coming. I'm hoping these will eventually clear up Baffin Bay. I'm looking forward to good winter fishing.