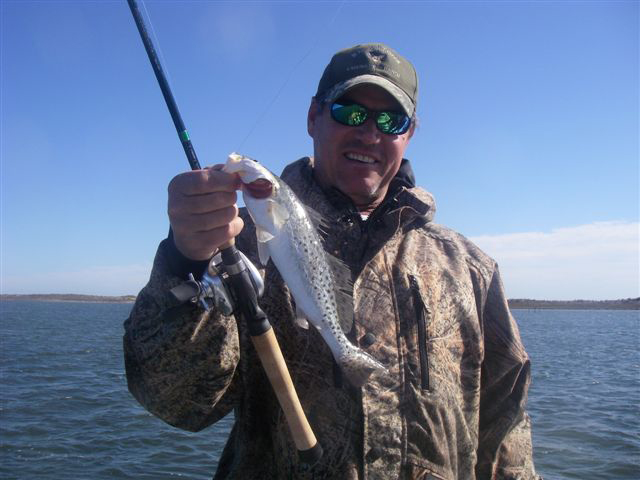 This is the one that was swallowed and then spit out right at the net.

This time of year with cold fronts coming through regularly, the water temperatures drop and the fish move down deep to grassbeds or muddy bottoms. Then a little sun light will come through and warms up the flats and the fish will move up shallow. Be flexible and prepared to fish all depths of water. One day you will be fishing the deep channels, the next day it will be five feet of water on the edge of a channel, and then the third day you'll be wading in one foot depths.

Last week I had a very nice couple come down from Minnesota. The weather was cold and misting rain. The air temp was about 40 degrees. I told them to be prepared for the weather. Being from Minnesota, I thought they are going to think this is warm, it's only forty degrees. Well, they said they had never been so cold. I had to lend them my extra jackets. We've got that damp cold and you add the wind and it goes right through you.

They did not want to wade so I found a deep channel maybe a half mile long that had some nice fish in it. We cast the Bass Assassin "SLURP" and just bounced it off the bottom a couple of times and let them sit still and the trout would hit it. They would actually pick it up sitting still. If you moved it too much you wouldn't get them. It was continuous action. We caught and released a lot of trout some were too little but most were good size and even some five to six pounders. The gentleman was a fishing guide in Minnesota, he said, on a good day they would catch three fish. So they were ecstatic with the kind of action we had.

The next day the guys from Academy came to shoot a TV Show. They said that they couldn't wade with the camera equipment which left us no choice except to stay in the boat. Everybody knows that for drift fishing you need some wind; we had just enough to move the boat- no more. If there hadn't been that little breeze we'd have had a long day inching along with the trolling motor. We fished hard all day long throwing Bass Assassins and we caught fifteen fish, all good trout up to six and seven pounds. I knew there were some good fish in this area by the way the baitfish moved and all I could think all day was if we could wade we would hammer them. We were lucky to catch what we did out of the boat and get the show done. It should be on the Outdoor Channel in March.

The next day my good friends from Houston came down; Greg Woodard and Scott Cannon, our nickname for Scott is "Sea Biscuit" because he wades like a race horse. He can really cover some ground. These two guys are excellent fishermen and they came prepared. We went back to the same little cove. It had really been a grind the day before with that TV show so I was pretty tired, and moving kind of slow, Sea Biscuit was a hundred yards away before I got out of the boat. Greg had already hooked up with a good trout and I saw Sea Biscuit hook up too. As I started wading I looked back at Greg who had just landed a twenty-nine-inch trout. I walked to Greg to take a picture. After that I headed toward Sea Biscuit and asked how he was doing. He said, "Oh Man, I've got to go back to the boat and make a phone call" and he wades back to the boat and left me standing right where he was and I cast my Bass Assassin and caught this beauty, a thirty-one inch trout. Sea Biscuit said, "I can't believe I walked off and left that trout." That's the way it happens sometime. Murphy's Law -- as soon as you leave they are going to bite. The same thing happened to me, too. Several years ago Jay Watkins and I were working a spot for hours and I had caught only one fish and it weighed eight pounds. Natured called, so I walked to the beach and that's when Jay hooked up with a double digit trout. I knew it, just like that big buck, as soon as you get out of the deer stand that's when that big buck is going to walk out. It's hard to stop because you know that one more cast could be the big one. Sea Biscuit did take a great photo for me, Thanks Scott!

A couple of days later I had some good fishermen come down who had a combination of trips from the Coastal Conservation Association. They had just fished with Jay Watkins and Bill Pustejovsky and I was their last trip. These guys had already fished with the heavyweights so I was hoping we could have a good day. It started out kind of slow; we didn't get a bite at the first place we stopped, the second place we caught some really nice fish. We were all catching two pound trout talking about catching a thirty-inch trophy trout. One of the gentlemen who raises deer was saying that for enough money you can buy that trophy buck; but you can't buy a trophy trout you have to catch them. They are true trophies.

That's when his rod just bowed up. He's got a big fish on, I could tell from the way the fish was fighting it was a big trout. She would stop and make that head shake and she came around to the back of the boat and we could all see her, she's a thirty-inch-plus monster. I grabbed the dip net and I'm ready with it and she comes around again; what looks like a black banana comes shooting out of her throat and the fish goes off one way and he reels in this fourteen-inch trout as we watch the huge fish swim away. He had actually hooked the smaller fish with the leadhead and the big one swallowed him whole. She spit him out right at the net. All she did was have it down her throat and she was not hooked. All we have is a picture of the trout that was swallowed. There are two big gashes on this trout as he was sucked down. Then we let the little one go, he'd had a rough day. He said "No one is going to believe this," but this does happen, especially this time of year when the big trout are targeting a big meal.

This is one of my favorite times of year. Match your lure to the bait. There are a lot fewer shrimp and perch in the water. All I'm seeing is big mullet, so I concentrate on casting big topwater lures and slow sinkers. I'm throwing the new X-Rap Surface Walker from Rapala; this thing weighs an ounce and a quarter. I'm also throwing the big Corky's that weigh over an ounce. You've got to throw these lures with a rod that has some backbone. I'm using the Waterloo 6'-6" Ultra Mag. It's got a good stiff backbone and I can chunk these heavy lures far and then when I get a bite with the big trout I can crank back hard and get some hooks into them. This rod has just enough give too. When the fish starts throwing his head, it doesn't throw the lure out. Your drag system on the reel has to be perfect. It will make a difference. This is for monster trout, we're not talking about a lot of hits, just the one or two big ones a day, when the trout are keying in on the giant mullet.

February is always good and March should be explosive. We start getting powerful southeast winds in between cold fronts; this puts lots of oxygen in the water on the shallow flats. The trout still has the winter fat around the tail and backs, plus the chance of having just eaten a mullet weighing a pound, and even the beginning of roe production. The fish are possibly at their heaviest weight of the year. You've got a good chance of catching your trophy trout this time of year.