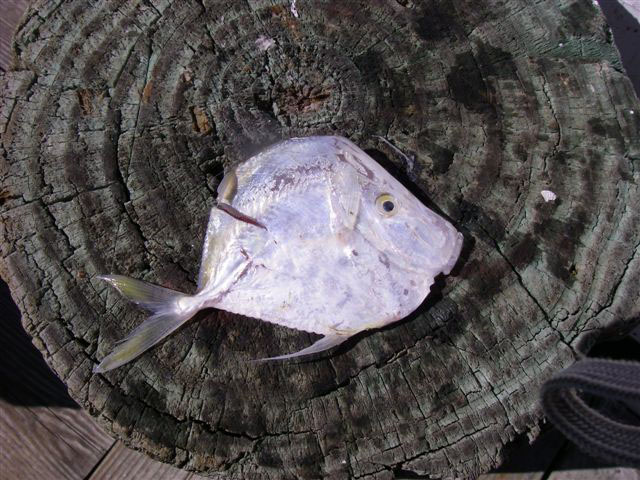 A rare specimen for the Upper Laguna that we removed from a speckled trout’s stomach – a look down fish.
Some like it hot, and some like it cold. Cold weather means big trout and I'm liking that. The colder the weather, the better the fishing. The water temperature is staying in the low sixties and upper fifties, which I really like for trout fishing. The consistent north winds have pushed clear water in along the west shore and south. In Baffin Bay, the water is still dingy and off-color, making a day of fishing down there difficult. But, the fishing on the north end of Laguna Madre has turned on recently.

I had a unique trip with a longtime friend, Steve Pollard, along with his young son Alan. I met Steve about twenty-five years ago in Mexico. Every year I travel to the Pacific coast of Mexico and look up Steve to get all the info on fishing. He's taken us to some great river mouths and beach fishing all along the coast that we definitely wouldn't have found without him. It's great to have a knowledgeable guide.

The first trip he took me on was offshore in a twenty-four-foot panga. I caught my largest fish ever; a seven-hundred pound black marlin. There were no fighting chair and no fighting belt. All I had was a towel for the butt of the rod. After about three and a half hours I finally had the fish alongside and she was almost as long as the boat. What were we going to do with this fish? Steve was ready to go overboard and tail rope the monster. No, no, I said, don't do that. I'm happy just to release her. It was an unforgettable experience. And I have it on video, thanks to Steve and friends.

So, when he came up to visit his family and called to go fishing I was glad to take him and his eight-year-old son out for the day. The prior week the fishing had been slow, it had been warm and the southeast wind was blowing hard as it does before the cold fronts. The water was really stirred up and the visibility was terrible. I could see only a couple of inches, but I had something we could try.

I rigged our rods with the Saltwater Assassin Kwik Cork, along with a leader about eighteen inches long and then tied on the secret weapon worm, the Texas Assassin 5-inch Shad in Avocado. This lure had been working all month, whether tied direct or under the cork. We began drift fishing in dirty water about three feet deep. The first fish we caught was a twenty nine-inch redfish. Steve tagged it and they were happy that they were going to have it for dinner. They were looking forward to BBQ-ing it whole. That is the way they do it in Mexico, nothing goes to a waste.

We were drifting along at a very good pace; the wind was relentless. Then, I stuck a heavy weight. It bent the rod and took out drag. I let Alan reel this one in. He had a long fight on his hands with his biggest redfish ever. It was thirty-three inches long. We took a picture and let her go. You could tell by the look on Alan's face that he was not really happy to release this huge redfish. He didn't quite understand; in Mexico a fish that big would feed a lot of people. Catch and release is not very popular in Mexico. So, he got a lesson in conservation, he's a great kid and speaks fluently in both English and Spanish. Who knows, maybe someday he'll be a leader in conservation.

The next day the cold front came in blowing hard north winds. The weather changed from hot to cold in just a few hours. The cool weather felt good and the sun was shining bright. I knew the fishing would be good. I didn't have a trip so I asked my wife to go. There was such a temperature change that I felt the fish would go deep to the channel of the Intra-coastal. We worked the trolling motor along the edge and the action was good. We caught about fifteen trout in an hour. Then, Carol showed that she had been taught well, and sticks this twenty-seven-inch trout that weighed six pounds. She worked it to the boat perfectly using her favorite Waterloo HP Slam Mag rod. She was thrilled. She is always showing off by catching the biggest fish. We were using the Saltwater Assassins' five-inch Shad in limetreuse. This lure works like a charm on bright, sunny days and cold water.

I saw the Texas Parks and Wildlife biologist the other day he said that all the net samples were in and the trout numbers were way down due to all the rain. But, for the first time ever in the Laguna Madre they caught several small tarpon that weighed ten to fifteen pounds and also caught a couple of snook. Since the opening of Packery Channel we're seeing different species in the Laguna. The other day while cleaning a trout, I found something that I've never seen in a trout before. I took a picture of it. It is a lookdown fish. They are in the jack family. Packery Channel is bringing in unusual things and helping with the water exchange from the gulf.

The cold fronts are coming in consistently now and it has helped to keep the water clear and the fishing good in the upper Laguna Madre. I'm hoping more cold fronts will eventually wrap the clear water around the north shore of Baffin Bay. I'm looking forward to some cold water wade fishing, anticipating fat winter trout.

It's 2008! I'm proud to announce the twenty-fifth anniversary of Cliff Webb's Guide Service. That's a milestone, twenty-five years in the fishing business! When I think back, I am very grateful. I wouldn't have made it without the great clients that I've had. We've gone through some tough conditions through the years. Like the brown tide, red tide, two fish-killing freezes and these people would continue to support me through bad fishing as well as the good. I am very fortunate. We should celebrate. Let's go fishing!