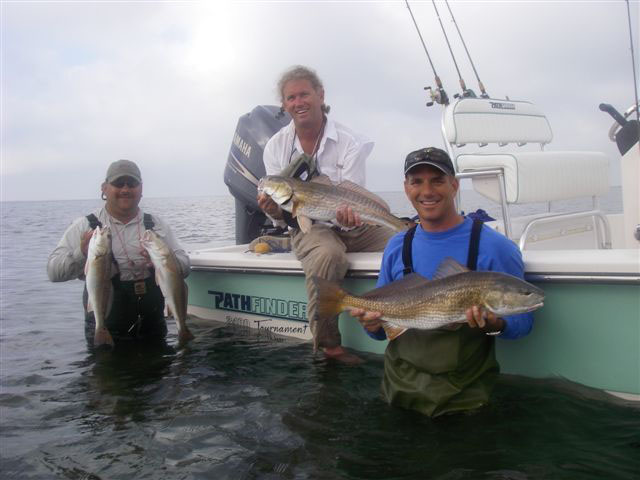 Joel Soriano, Brett Carter and Mike Weaver got into some nice redfish.

The fishing has been excellent. We've had a good wave of big trout caught by everyone, no complaints. This is the payoff right before the weather gets too hot and the trout bite slows down.

We finally had a few days of a much needed rainfall. We had several inches of runoff into the bays. This along with the full moon pushed the tides high by a couple of feet. The water is not quite as clear but, the conditions are still really good.

This saying, by one of my good old fishing buddies, Chatter Allen, has never been truer, "Fish are where you find them." The guys would ask Chatter, "Where are you going to fish?" he'd say, "Where I find them." One of the many things I learned from the old fishermen is to fish the signs - not the spots. If you fished the same spots as you did last year at this time you would be disappointed. At least, that is what I've found. The fish aren't always in the same spots as they were last year at this same time.

You've got to look for the right signs. The right baitfish, the right bottom and structure, and the right water clarity. I look toward the shorelines to locate the mullet. I'll see several miles of mullet but, not the right size, usually too big. Then, I'll see the right size mullet, six to ten inch sizes. That is a dead giveaway for trout. Next, see if there's any structure around for the trout to hide in. Look for a little uneven bottom, ditches or holes or grass beds or rocks, something that will give the trout a place to hide. I've seen trout just hang in grass beds totally covered and you can hardly see them and they wouldn't move.

Early in the mornings at first light I'll ease up on the shorelines and see the big trout making wakes as they feed right on the water's edge. They are able to pin the mullet down in the shallow water. As the day progresses the fish move out to deeper structure. The trout will hang deep in the structure of channels and watch the edge for anything to fall off into their hideout and ambush it. Always look for baitfish and look for structure.

A perfect example of the bait drifting over structure and being ambushed by trout was on a recent trip. We were wading a shallow flat behind some rocks. The baitfish were bunched in tight circles and heading toward the outside rocks. It was like an old Western movie when you tell the boys to, "head 'em off at the pass." We waded to the outside rocks where the baitfish were going. This was in the middle of the morning and we could see the dark spots made by the grassbeds and scattered rocks. We were standing shallow and casting toward the deep structure. We knew there would be big trout in this area ready to ambush this bait. Sandy Saxe caught and released the first big trout; it was 29- inches. Joe Peddie stuck another good one in the six-pound range. I caught and released another trout that was twenty-nine inches long. I was casting a small gold Rapala with a jointed tail. It had been customized by ED'S LURES. Johnny's Sport Shop in Eagle Lake gave me a couple to try and they were hot. We wade-fished all day long for two days and caught and released dozens of good trout and a few reds. But, we didn't catch any trout larger than thirty inches, which is what the guys were looking for.

The next day I fished with Dr. Wayne Laster. We went to the same spot to fish the rocks and grass beds. Since we were drift-fishing, we worked out deeper with the trolling motor in water depth of five to six feet around the rocks and deep grassbeds. We cast the Saltwater Assassin five-inch shad in plum/chartreuse tail, working it deep, right down on top of the grass. Our first drift produced this huge sow trout with a head that looked like a football. She was more than thirty inches long. The biggest trout I've seen all week. So, don't forget about working the deep structure, especially when the weather gets hot.

The redfish have been plentiful. We had a great day with some wade-fishermen that got their fill of reds. We were wading the spoil islands targeting the sand pockets with the Saltwater Assassin in pumpkin seed/chartreuse tail. The redfish were feeding and the bite was on, we also caught some good-size trout in there, too.

A few days later we were drifting again and the trout fishing was slow that morning. The reds saved the day. The wind was calm and the water surface was slick, the redfish were schooled up in what looked like a big orange ball. You could see them turn and flash their white bellies as they fed off the bottom. The fishermen really enjoyed it and got a workout fighting redfish.

The middle of the summer brings calm winds and I will be sight-casting. We will do some fly-fishing too, should be fun.