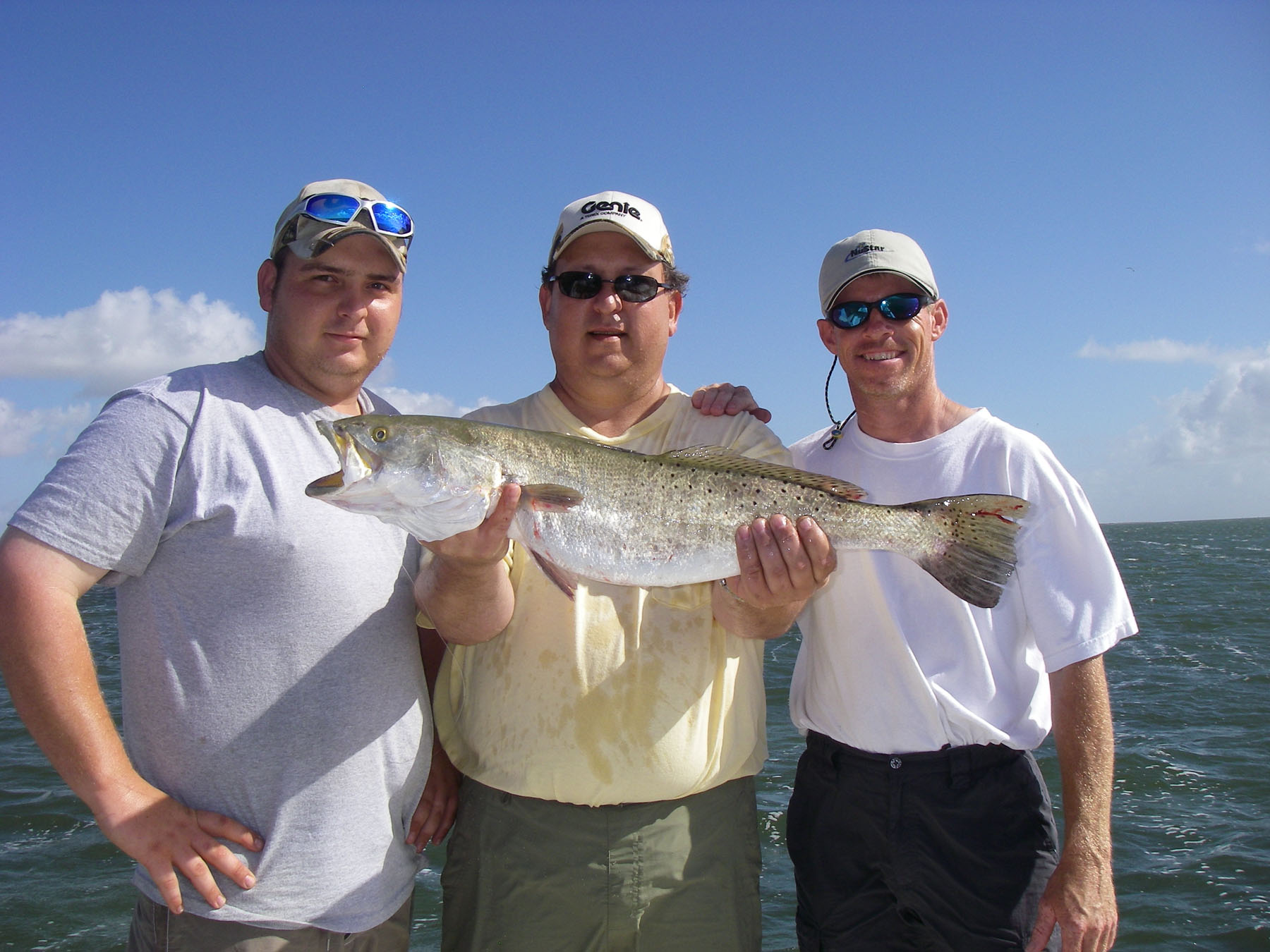 Left to right, Cliff Buendel, Doug Buendel, Cody Schuchert, with Doug’s 30-3/4 inch trout.
The weather and fishing have definitely improved in the upper and lower Laguna Madre. We finally got a break from those relentless winds of the past three months. This has allowed me free roam of the whole bay system. I'm happy to report that we have clear water in most of Baffin Bay. It's clear and beautiful from the back of Alazan Bay to Penascal Point and south to the Land Cut, including Yarborough Pass. The whole east side at Bird Island has been clear, too. I haven't seen water like this in a while and it has definitely improved the lure fishing.

This time of year, my favorite fishing comes from the deep rocks of Baffin Bay. We can actually make out the rocks and are able to work the lure around them without getting hung up all the time. The past few days we've caught two, thirty inch trout out of the rocks. One was with Dr. Wayne Laster. We started early in the morning on the shallow rocks throwing topwaters. The bone and silver Top Dog has been hot all month. We caught several trout in the four to six pound range. There were also several big reds mixed in. One red weighed ten pounds and had ten spots. Later in the day we moved out deeper and with the help of the sun I could make out the shadows of the rocks. The action kept up and produced several more good fish. The best was a thirty-inch trout that was skinny and weighed a bit less than seven pounds. She was probably an old fish of nine years or so and the stress of spawning had taken it out of her; more so than a younger fish of that length as I saw the next day. All the fish were released.

The following day, Cody Schuchert of D&C Fence Co. came over and he brought two of his relatives, Cliff and Doug Buendel. The four of us continued with the same pattern on the rocks. The topwater bite was a blast early on the shallow rocks with trout and reds blowing the lures out of the water. I never get tired of seeing this. Later, we moved with the trolling motor to the deeper rocks. We switched lures to the plum and chartreuse five-inch Bass Assassin. The two biggest fish of the day came off the deeper rocks. Doug hooked a big trout that came to the top and made several headshakes and ran under the boat, nearly tangling the drift anchor. This is typical of big trout. Doug put his rod down in the water and went around the front of the boat to clear the trolling motor and was able to unwrap from the sea anchor and landed her. She was 30 3/4, inches long and weighed nine pounds, his personal best.

Cody quickly backed it up with a 33-inch red that weighed 14 pounds. Now the pressure was on Cliff and he did it, catching a nice 27-inch trout. On big fish days you hope everyone in the boat has a chance to catch one. On this day everyone went home happy.

In working the heavy structure of the rocks, the key is to get the big fish out as quick as you can. They will turn back into the rocks and break you off if they get the chance. I'm using the Waterloo HP Slam Mag, 6'6" with the 20 lb. Power Pro braid and 20-lb mono leader. With this great equipment, we're able to pull out a lot more big fish from the rocks.

I talked to Art Morris, a biologist with Texas Parks and Wildlife. He filled me in on several interesting occurrences in our bay system. The net samples are as good as last year, with a lot of trout and redfish. He said we are benefiting from the rains of a year ago. Especially, with a better number of flounder than we had last year. There are excellent numbers of shrimp and crabs, too. The net samples are showing more bonnethead sharks and small tarpon, species we didn't see before Packery Channel was opened.

There are some changes going on with the seagrasses of the Laguna Madre. Before 1980, we only had a few types of seagrass, with an abundance of shoal grass. Now, the manatee grass is showing up. It is being brought in with our currents coming from the south. These grass seeds are getting swept up north as far north as the JFK Causeway. The manatee grass looks different, it's long and grows up to the surface. It looks like a fish slick on the top of the water. It's hard and matted. You can hardly reel a lure through it. It doesn't hurt our bay system, it's just different. In fact, the bay bottoms with the heavy grass are much more productive. We need to do all we can to protect our seagrasses. We can use the trolling motor or pole out to deeper water before taking off with the big motor as not to rip out grasses in the shallow water.

The summer months are promising. I'm going to be working the deep rocks of Baffin Bay as long as the pattern lasts. When the trout bite turns off from the summer heat, I'll probably be fishing the Intracoastal and the Land Cut, working the deep channel edges. There should be trout and flounder down deep when the heat is on. Also, sightcasting redfish will be an option with the light winds of July and August.